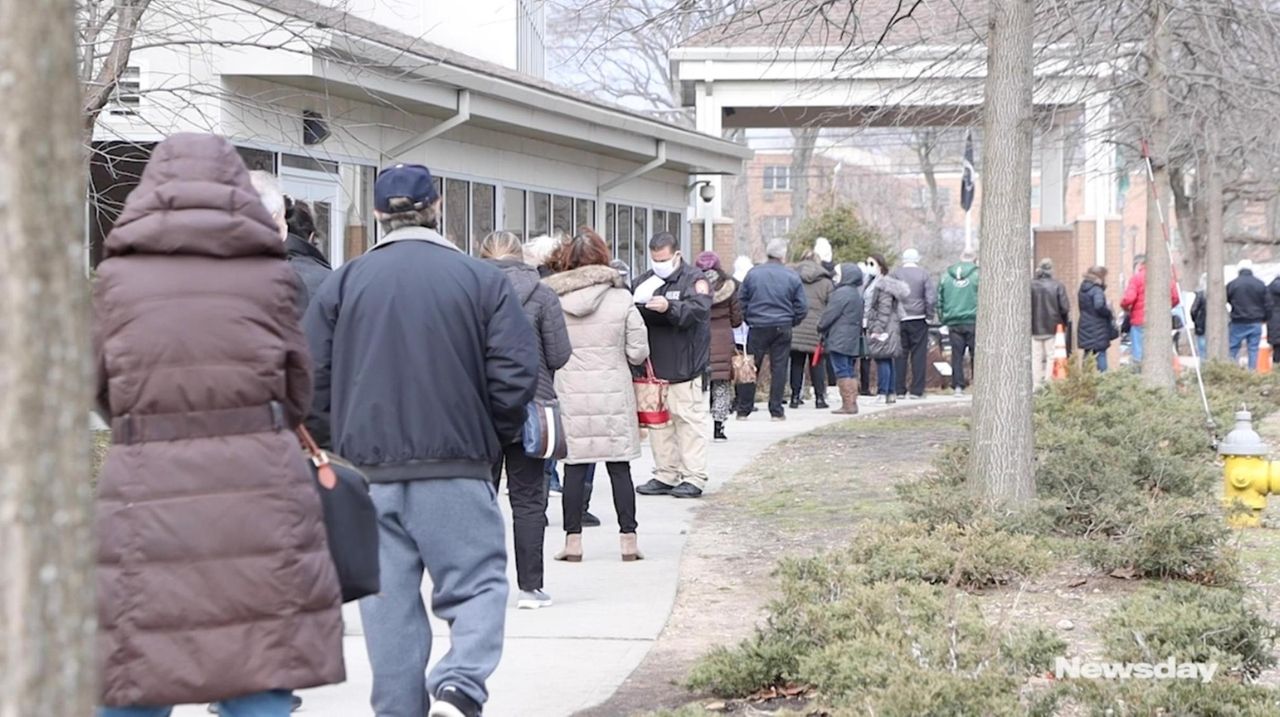 Nassau officials say there is a countywide shortage of the COVID-19 vaccine because the supply chain from the federal government on down is nowhere near the quantities needed. Steve Langford has the story, as Long Islanders attempt to set up their vaccine appointments. Credit: Howard Schnapp

A state-run COVID-19 vaccination center opens at Jones Beach on Thursday, and it appears every slot has been taken until at least mid-April.

Thousands of Long Islanders have been scrambling to make appointments at various centers, but the number of people eligible to receive the vaccine exceeds the doses the state is receiving from the federal government. Gov. Andrew M. Cuomo said about 300,000 doses are shipped each week to New York, yet more than 7 million residents are now eligible for the vaccine.

The state opened several mass vaccination sites on Wednesday, including one at the Javits Center in Manhattan. New Yorkers can get appointments at any state-run site, the state said. State officials said more vaccination centers will be announced in the coming days, including at Stony Brook next week.

An online scheduler, which ends in mid-April, showed no availability at the Jones Beach site, Field 3. State officials did not respond to inquiries Wednesday about how many people had signed up to be vaccinated.

Pat Tracy, of Glen Cove, said she was beyond frustrated after failing to get an appointment at Jones Beach or anywhere else.

"Some of these places show no appointments available until August," Tracy said. "I feel like these websites don’t work. Sometimes they just tell you to keep trying, but there is no other information."

Leo Stimmler, 78, of Garden City, and his 75-year-old wife, Kathleen, were two of the luckier ones. They got appointments for March 18 and March 21 after spending two days trying for slots at different venues in Nassau County.

But the couple had hoped to get an appointment sooner. "At least it’s not May," Kathleen Stimmler said.

There also was some confusion Wednesday for people who already have received their first shot, but are trying to make appointments for the second dose. Both the Pfizer-BioNTech and Moderna vaccines require two doses. Pfizer’s is administered 21 days apart, while Moderna’s is given 28 days apart.

State officials said people who receive their first dose at the large vaccination sites they run will receive appointments for the second dose before they leave. They said people should not try to schedule second shots through the state’s online portal.

But some who received their first shot at facilities run by Northwell Health, county governments and other locations are still waiting for appointments.

Cynthia Brzozowski, a dentist in Garden City who also works for the Suffolk County Medical Examiner’s office, received her first dose of the Moderna vaccine on Dec. 31 at a Northwell facility. But despite several calls, she has not been able to make an appointment for a second shot.

"I thought I would have been contacted by now," Brzozowski said.

Northwell spokesman Joe Kemp said everyone who receives their first shot will receive a second dose within the necessary time frame. They will be contacted to make an appointment as the second date approaches, he said.

Other than state-run sites, Long Islanders may be able to get the shots at pharmacies. Independent pharmacists said they will accept eligible residents who make appointments either on their website or over the phone.

Howard Jacobson, owner of Rockville Centre Pharmacy, received 100 doses on Tuesday, but a scheduling snafu on his website allowed 1,000 people to make appointments.

"I've had people making calls [Wednesday]," he said. "I'm sick about it. I apologize to everyone about this. People can't get an appointment anywhere."

Tom D’Angelo, who owns two pharmacies in Nassau, said he received 600 doses to be distributed at his Americare pharmacy in Garden City.

"We will vaccinate our staff the next couple days, and then we should be ready to roll by Monday," he said. "We expect to start taking appointments shortly."

D’Angelo said his phones have been ringing nonstop.

"I have friends I didn’t know I had," he said. "There are people knocking on our door. It’s nuts."

The vaccine, through a federal agreement, "will eventually be available at CVS Pharmacy locations throughout the country, subject to availability and prioritization of populations, which will be determined by states," the chain wrote in a statement, adding "the minute that program is turned on, we’ll be ready to go."