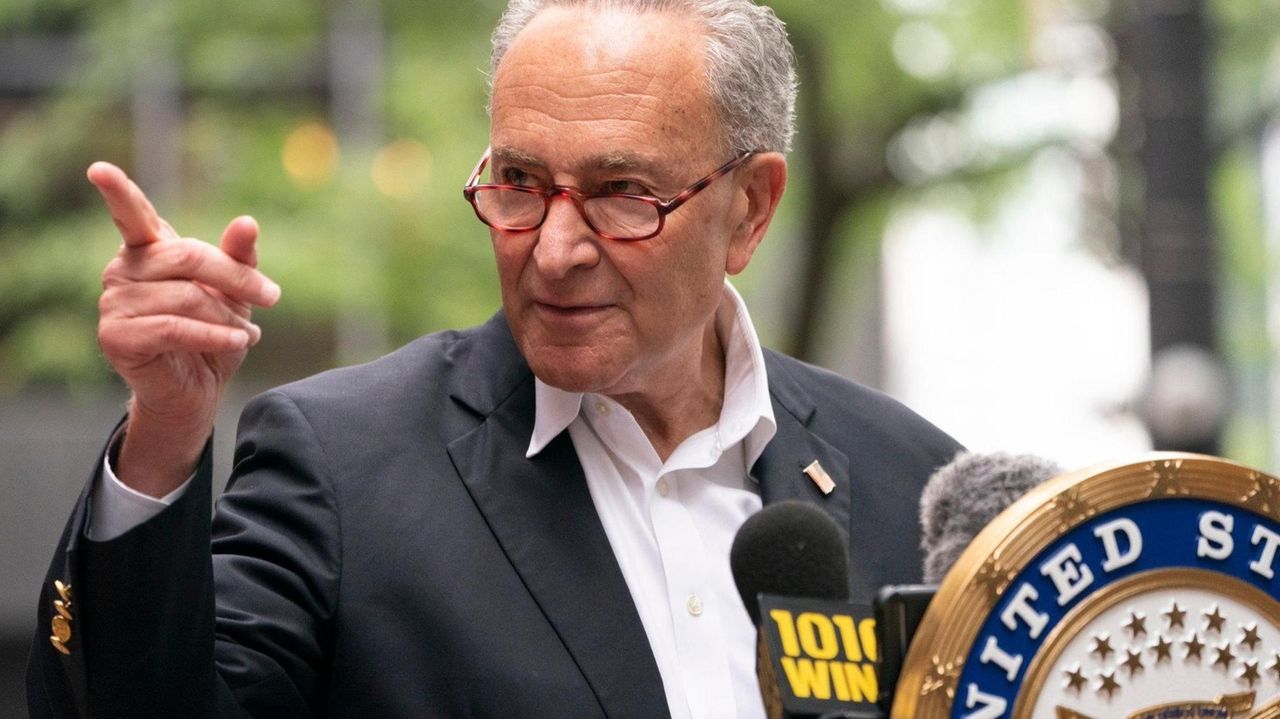 U.S. Senator Chuck Schumer holds a news conference outside his Manhattan office on Sunday, Aug. 2, 2020, to discuss the progress and divisions that remain in negotiations on the next coronavirus reliefpackage  after a meeting with Trump administration officials this weekend. State and local funding and funding to open schools safely are a must for Democrats, Schumer said. Credit: Charles Eckert

Chief negotiators for a Congressional coronavirus relief package said Sunday they are still not close to a deal as Republicans and Democrats remain divided on enhanced unemployment benefits and aid for state and local governments.

White House Chief of Staff Mark Meadows told CBS' "Face The Nation" that he was “not optimistic there’ll be a solution in the near-term” while House Speaker Nancy Pelosi told ABC’s "This Week," “We’ll be close to an agreement when we have an agreement.”

Democrats Pelosi and Senate Minority Leader Chuck Schumer of New York said a deal needs to include renewing a $600 enhanced unemployment benefit, protecting renters and homeowners and providing funding for state and local governments and schools.

U.S. Treasury Secretary Steven Mnuchin said the unemployment benefit should be tied to individuals’ previous wages and criticized Democrats for turning down a one-week extension. He said “the big need is to get kids back to school and the economy open” and expressed opposition to providing local government aid.

“That’s not something we’re going to do, to bail out (governments) with fiscal issues,” Mnuchin told ABC’s “This Week.”

Schumer said in a news conference Sunday morning that coronavirus “has put about 1.8 million New Yorkers on unemployment, risks nearly a million people evicted and marks a financial doomsday for local budgets that support sanitation workers, firefighters, teachers and more.”

“We have to make sure these are the folks that get the help,” Schumer said.

The divisions remain a day after officials said they had made the most progress yet in negotiations.

Mnuchin said he and Meadows have presented three to four enhanced unemployment benefits options. He said he wants to ensure people are not being paid more on unemployment than in their jobs, which he called a disincentive to going back to work, a claim that Democrats and a recent Yale University study disputed.

Mnuchin and Meadows said Democrats should agree to piecemeal deals in the meantime.

“Let’s extend for one week while we negotiate, so we don’t hurt the American people,” Mnuchin said.

Democrats blamed Republicans for months of inaction, noting that House Democrats passed the HEROES Act in May but that Senate Republicans did not present their own proposal until a week ago.

As school districts around the country consider reopening plans, Dr. Deborah Birx, the White House coronavirus response coordinator, advocated for continuing distance learning “to get this epidemic under control.”

“We need to stop the cases and then talk about safely reopening” schools, she told CNN’s “State of the Union.”

Birx attributed the continued rise of coronavirus cases — which she called a “new phase” — to people going on vacations and hosting “super-spreader events,” such as house parties.

“As I traveled across country, I saw all of America moving,” Birx told CNN’s “State of the Union” of her work travel.

Birx said people need to assume they have coronavirus if they vacationed in a hot spot.

But as Birx was being interviewed on CNN, Pelosi told ABC that she did not have confidence in Birx because she was appointed by President Donald Trump, who she said has been pedaling misinformation about the virus. When asked to respond, Birx said she has always followed the data to enact programs to save lives.

Also Sunday, Meadows defended President Donald Trump for floating the idea of delaying the Nov. 3 election. Meadows said Trump was referring to the fact that mail-in ballots are expected to cause delays, citing the weekslong delay in New York’s June 23 primary results.

“He has not looked at delaying any election,” Meadows said. If we try to do mail-in ballots, “what we will see is a delay because we’re not equipped to handle it.”

But Clyburn said he is concerned Trump was showing “he doesn’t plan to leave the White House” if he loses re-election and that he would “install himself (as leader) in an emergency way.”