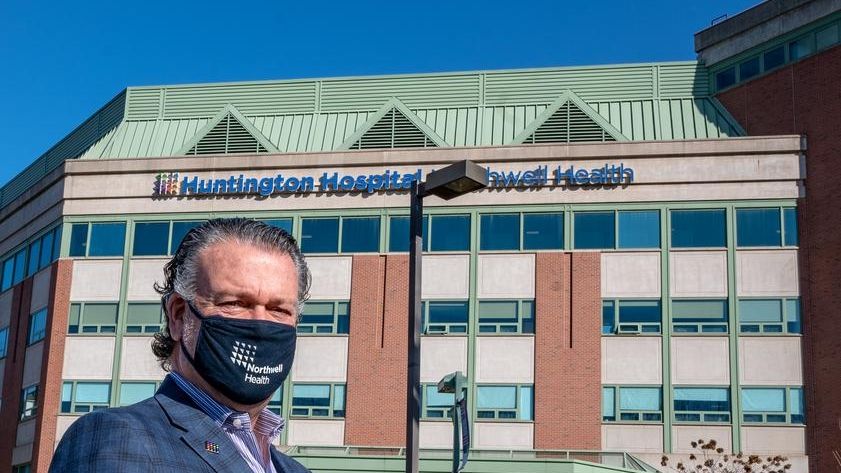 Two Long Island hospitals built in the spring for hundreds of millions of dollars but never used would open in phases over weeks — if needed — to help in the battle against the coronavirus, state officials said. Dr. David Battinelli, senior vice president and chief medical officer at Northwell Health, talks about what hospitals are prepared to do. Credit: Newsday / J. Conrad Williams

Two Long Island field hospitals built in the spring for hundreds of millions of dollars but never used would open in phases over weeks if there is another coronavirus surge, state officials said.

The SUNY Old Westbury and Stony Brook hospitals were not completed until late April, after COVID-19 patient numbers had declined.

A Staten Island field hospital — a converted psychiatric center — reopened Tuesday amid a rise in hospitalizations there.

Gov. Andrew M. Cuomo said last week that if the virus' spread increases by more than 20%, "We would start to look at emergency hospital beds" elsewhere, including field hospitals.

There is more than 460,000 square feet of climate-controlled space in nine tents built at Old Westbury and Stony Brook, plus a converted gym at Old Westbury, according to the U.S. Army Corps of Engineers, which spearheaded the construction projects. The hospitals could serve more than 2,000 patients.

The gym could open within 10 days if permanent hospitals become overwhelmed, with the tents opening after that in phases, if needed, state officials said.

Medical equipment would be moved from stockpiles around the state, said Gareth Rhodes, a member of Cuomo’s COVID-19 task force and deputy superintendent and special counsel for the state Department of Financial Services.

The contracts to build the hospitals were for amounts not to exceed $252.5 million, said Michael Embrich, a spokesman for the New York district of the Army Corps. But the state likely made alterations after the Army Corps transferred control to New York, and he referred queries on final costs to state officials, who did not respond to cost questions.

Despite the high price tag, "I don’t think it was a waste" to build the field hospitals because they are now available if there’s a new surge, said Dr. Jessica Justman, an associate professor of epidemiology at Columbia University and an infectious disease specialist.

"We have all these plans that could be quickly pulled off the shelf and put into place for field hospitals," she said. "And there’s a much better appreciation on how to staff them and how to supply them."

Existing hospitals are best for patient care, and thousands of patients were transferred among hospitals in the spring, Rhodes said. The governor had ordered all hospitals to increase capacity by 50%.

Today, with much more extensive coronavirus testing and experience from the spring surge, the state can more accurately project and plan for future surges, Rhodes said.

The field hospitals originally were built for inpatient care. But they should be considered for outpatients as well, said Dr. David Battinelli, chief medical officer at New Hyde Park-based Northwell Health.

For example, antibody drugs are given via outpatient infusions to COVID-19 patients with mild or moderate symptoms. But, Battinelli said, medically vulnerable people such as those needing chemotherapy use infusion centers, and it would be risky to bring COVID-19 patients there. The field hospitals could provide infusions, he said.

"A lot of the COVID-positive treatments in the future will be for people before they get into the hospital," he said.

Authorization to build them came amid March projections that more than 110,000 COVID-19 patients at a time were possible in a state with about 53,000 hospital beds, Rhodes said. At the April 12 peak, there were about 18,825 New Yorkers hospitalized with COVID-19. Experts credit the spring shutdown and social distancing for lower numbers.

Some field hospitals were used, such as at Manhattan’s Javits Center, where nearly 1,100 people were treated, state officials said.

David Abramson, clinical associate professor at New York University’s School of Global Public Health, said other field hospitals "were just on the cusp of being needed."

Oceanside's Mount Sinai South Nassau hospital, where on peak days in April there were nearly 500 patients, compared to the typical 340, asked a number of patients in the spring if they would go to Javits, but "almost everyone said no," because they preferred to stay in a permanent hospital closer to home, said Dr. Aaron Glatt, chief of infectious diseases at the hospital.

Dr. Leora Horwitz, a doctor at NYU Langone in Manhattan and lead author of a recent study showing an increase in survival rates among COVID-19 patients, said beds are less important than qualified medical professionals.

"People are preoccupied often by beds," she said. "But it’s really about staffed beds and properly staffed beds. That’s the measure we should be caring about."

In the spring, when New York was the U.S. epicenter of the pandemic, medical professionals traveled to the state from across the nation. But, with COVID-19 now surging nationwide, "that would not happen today," Horwitz said.

Rhodes said if the field hospitals are opened, there would be enough medical professionals, including from staffing agencies and a list of about 90,000 volunteers that includes retired doctors and nurses, and medical students.

But, Horwitz said, asking people to perform jobs they’re not accustomed to, such as asking a nurse not experienced with intensive-care work to work in ICUs, likely "doesn’t generate as good an outcome as you would have if everyone was doing what they have expertise in."

The state had a system in the spring that was supposed to better distribute the patient load among hospitals. But on Long Island, some hospitals were stretched thin by overcapacity, while others were not.

Long Island Community Hospital at its peak in late March and April had about 100 COVID-19 patients, with only a few non-coronavirus patients, said Richard Margulis, the Patchogue hospital’s president and CEO. The hospital typically has about 250 patients, and, with the governor’s order, had room for 375 during the spring, he said.

"We had idle capacity … so we could take more COVID patients if we had to," he said.

The state and Suffolk County were aware of the excess capacity but didn’t propose sending patients from other hospitals to Long Island Community, he said.

Rhodes said the state worked to transfer patients from hospitals nearing capacity — even though some hospitals were resistant — and transferred about 1,500 patients among hospital systems, which were legally required to report their needs and patient numbers.

Some hospitals transferred patients to others within their system.

At Northwell, the state’s largest health system, with 19 hospitals, up to 100 patients a day were transferred out of the most crowded buildings to less-stretched facilities to "ease the distribution and not overwhelm a single facility," Battinelli said.