Melissa Vell, a volunteer, loads a bin Friday during a food drop off in Bethpage. Credit: Kendall Rodriguez

There's a concerted push among food banks and food pantries to corral enough turkeys and fixings to give Long Islanders the kind of Thanksgiving meal they're used to even during the coronavirus pandemic.

Food bank officials say they plan to provide tens of thousands of the birds for holiday meals during a year when record numbers of Long Islanders have turned to food distributions out of economic necessity brought on by the pandemic.

Both of the Island's large food banks, the Bethpage-based Island Harvest Food Bank and Long Island Cares — the Harry Chapin Regional Food Bank, in Hauppauge, have already distributed thousands of turkeys and canned goods and are planning to donate more before Thanksgiving.

"This season has definitely been our most challenging season, I think, in the history of our organization," said Randi Shubin Dresner, president and chief executive officer of Island Harvest, which is hoping to distribute 14,000 turkeys. Dresner said 8,000 have been given away and she expected another 4,000 to 5,000 would be donated this week. 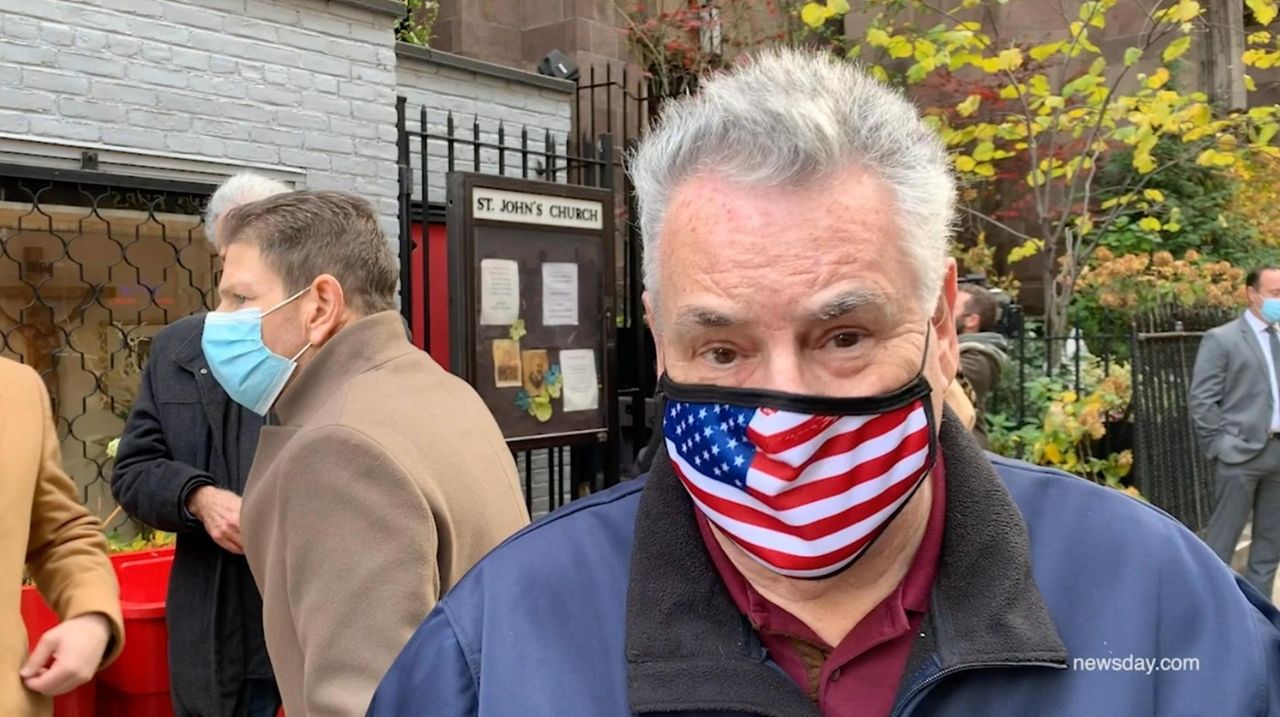 "The need is up drastically," she said.

Dresner was on hand Friday as vehicles lined up in the parking lot of Bethpage Federal Credit Union's headquarters to receive turkey and other food donations at its 12th Annual Bethpage Turkey Drive.

"Our message this year is to support your neighbors! Countless families continue to have struggles. Let's help them enjoy a holiday meal," said Linda Armyn, the credit union's senior vice president, in a statement.

A PSEG Long Island utility truck delivered 265 turkeys donated by employees and customers as well as more than 3,000 pounds of nonperishable food from numerous food drives at the utility's offices, said George Coburn, manager of community outreach. "Everybody's looking to give back now."

Island Harvest on Monday gave out 3,000 packages containing turkeys and other food during a distribution at the Nassau Veterans Memorial Coliseum sponsored by Nassau County. Thousands of vehicles lined up, some of which arrived about 8 a.m., three hours before the distribution started, officials said.

"There are so many people across our island who are struggling to make ends meet," Dresner said at a news conference Monday held by Nassau County Executive Laura Curran.

"So many of them tell us they have never been on a food line before," she said. "What we've heard from so many of our guests is that in the past they were donating food and contributing dollars to organizations like Island Harvest. And so they never imagined that they would be on the other side of the truck. But here they are."

Dresner said Island Harvest always tell its volunteers — 237 were at the Coliseum distribution — that this is a "no judgment zone because we know COVID brought them to our lines."

Chris, a Bellmore resident who did not want to give his last name, said he was in the vehicle line for food because he was on disability and recently lost a job delivering flowers after the flower shop burned down.

"I don't get a lot of money in food stamps and every little bit helps," he said.

Nassau wanted to "help people through a difficult time," Curran said, noting the hardships the pandemic has wreaked on Long Islanders. She said the county has partnered with "Island Harvest and others to put food on the table of an estimated 30,000 families, and I think that number will be going up with Thanksgiving."

Curran was joined by several elected officials, as well as the state Commissioner of Parks, Recreation and Historic Preservation Erik Kulleseid, who said the state's Nourish New York program has provided $35 million in aid to food banks. He added that the state provided some of the turkeys for the Coliseum distribution.

There has been a dramatic surge in Long Islanders seeking food assistance but Paule Pachter, chief executive officer of Long Island Cares, said his organization is meeting the increased demand. The nearly 400 pantries and soup kitchens his food bank regularly supplies haven't reported an increased need for turkeys and other holiday trimmings, Pachter said last week.

"What we’re hearing from our pantries, our agencies, is everybody seems to have an abundance of food," Pachter said, citing "amazing food drives."

Pachter added: "They all get it. They know what’s going on out there. There's no stimulus money, no unemployment money, so they're responding in a very big way."

Long Island Cares had served 195,206 Long Islanders from the beginning of the pandemic in March through the end of October, a 43.1% increase over the same period last year, Pachter said, adding that more than 128,000 came to the food bank for the first time. The food bank has distributed 14,405,167 pounds of food — about a 68% increase over last year.

Dresner said Island Harvest has helped more than 400,000 people since March. The food bank has distributed about 11 million pounds of food between March and September, a 46% increase over the same period last year.

To donate, volunteer or seek out food:

Long Island Council of Churches: which in addition to food items, is also seeking cleaning supplies, at liccdonate.org