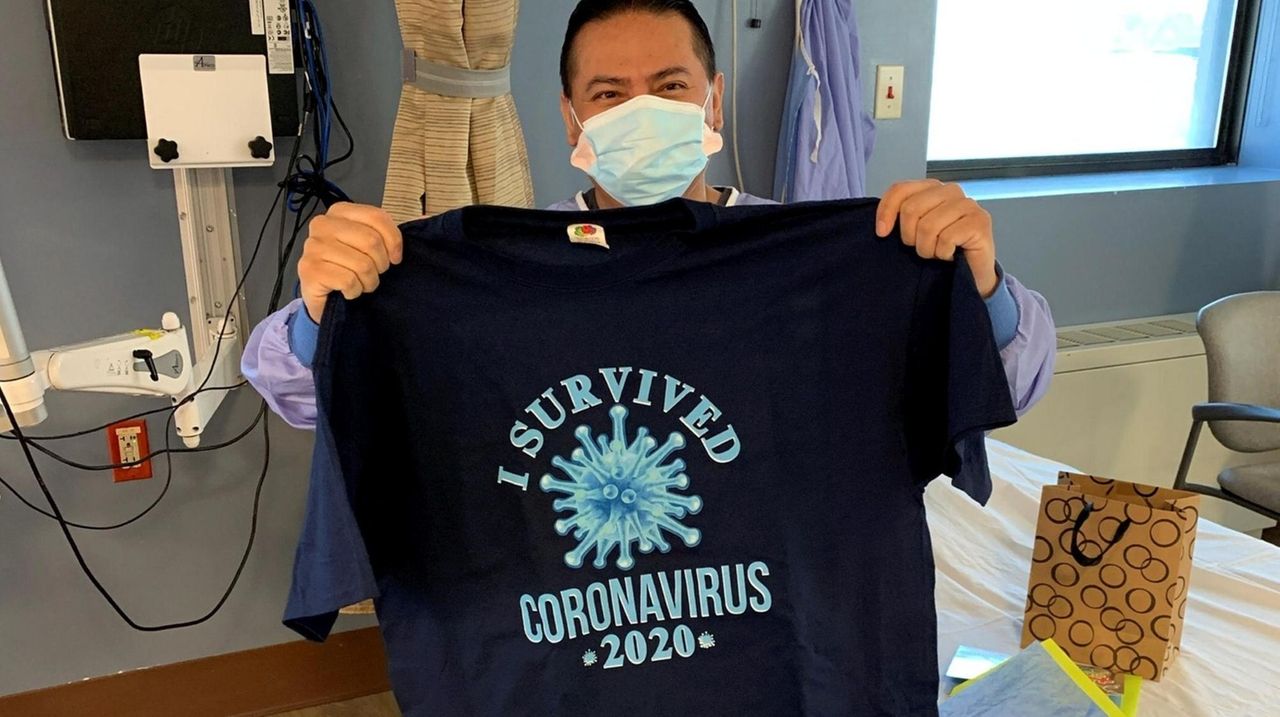 Miguel Chamaidan became the first Long Island resident to test positive for COVID-19 and be hospitalized on March 5. He spoke to Newsday on April 28 about the experience.  Credit: Newsday staff; Photo credit: Catholic Health Services

Miguel Chamaidan rested in a bed at NYU Winthrop in Mineola on March 5, oblivious to the angst his hospitalization had created on Long Island.

Hours earlier, the 43-year-old Uniondale man became the first Long Island resident to test positive for COVID-19 and be hospitalized. His hospitalization made news throughout the region.

"I was in shock," Chamaidan said. "I couldn't believe it. They were all talking about me. I knew nothing about the coronavirus. It was all shocking."

Chamaidan isn't sure where he contracted the disease. He works in the physical therapy department at Mercy Medical Center in Rockville Centre. He also runs a private car service that takes Long Islanders to and from airports.

At the time of his hospitalization, the state said the case was an instance of "community spread." The U.S. Centers for Disease Control and Prevention defines community spread as an illness in which the source of infection is unknown.

Chamaidan said Nassau County asked him who he had been in contact with the week he came down with symptoms. He answered, "My wife and kids."

A few days before being hospitalized, he was at home, sick with a fever and chills. He also was struggling to breathe.

"It was definitely unusual," he said. Still, he resisted seeking medical help, hoping he would be able to sleep it off.

That all changed when Glendy, his wife, asked him to drink some water. He struggled to do so because he was having so much trouble breathing, and that's when he decided to go to the hospital.

"They did an X-ray and a CAT scan," he said. "Then a doctor came in all gowned up and said he was going to test me for coronavirus."

His immediate thought? "What? How can that be?" he said. "I hadn't heard much about the coronavirus."

Meanwhile, Glendy was checking in on their children, ages 22, 20 and 13, and communicating with friends and family. She was focused on her husband, not the news reports.

"But my family started calling, saying that our house was on TV and that they were interviewing our neighbors," she said. "It was upsetting. It was disturbing. Our kids had to close the curtains so no one would look in."

By then, COVID-19 had made its way from China and Europe to the United States, having killed residents of a Kirkland, Washington, nursing home. Cases had been confirmed in California. In New York City, the first case was confirmed March 1, although a subsequent study led by Boston-based Northeastern University found that COVID-19 cases throughout the United States might have gone undetected for weeks.

Last week, doctors at Stony Brook University Hospital said their first suspected COVID-19 case came Feb. 7, a month before Chamaidan landed at NYU Winthrop. The unidentified Stony Brook patient had respiratory symptoms and had traveled to China. At that time, patients were being told to go home and isolate themselves, as health systems were not yet testing for COVID-19.

"With a virus like COVID, with so many people being asymptomatic, it's completely unsurprising that people were undetected," said Summer Johnson McGee, the dean of the school of health sciences at the University of New Haven in West Haven, Connecticut. "In all likelihood, we will never know who patient zero was in the New York area or anywhere."

On Long Island, Glendy, 41, also tested positive, and although her bout with COVID-19 was relatively minor, she was hospitalized right next to her husband.

"I was admitted a few days later, and I spent most of the time just taking care of Miguel," she said. "The kids had tested negative, so it made sense to keep me away from them."

Meanwhile, friends and family watched the news nervously, unsure of what was happening inside the walls at NYU Winthrop Hospital.

"I heard he was getting six liters of oxygen and I knew that wasn't good," said Angelo Icmat of Valley Stream, a longtime friend of Miguel's and a co-worker at Mercy. "A 90-year-old often gets two liters. Knowing this, I was really concerned.

"Thankfully, he pulled through," Icmat added.

Kerry Brown, director of therapeutic services at Mercy, also was "extremely concerned for his well-being and his family's well-being. I was trying not to bombard him, but was checking with him every couple days."

At the hospital, Miguel was exhausted whenever he left behind the oxygen to perform tasks, such as going to the bathroom.

"I felt like I had just gone on a two-mile run," he said.

He slowly started to improve and was discharged March 17.

Miguel and Glendy were quarantined for 14 days, living in separate bedrooms upstairs, while only sharing a bathroom. Their children lived downstairs and used a different bathroom, Glendy said.

"The kids took care of us," she said. "NYU Winthrop called and checked on us. They were great."

Added Miguel: "I couldn't have made it without the help of everyone there, and God. Really, my faith made a big difference."

When he returned to work on April 1, his co-workers rewarded him with a present. It was a T-shirt that read: "I survived Coronavirus 2020."