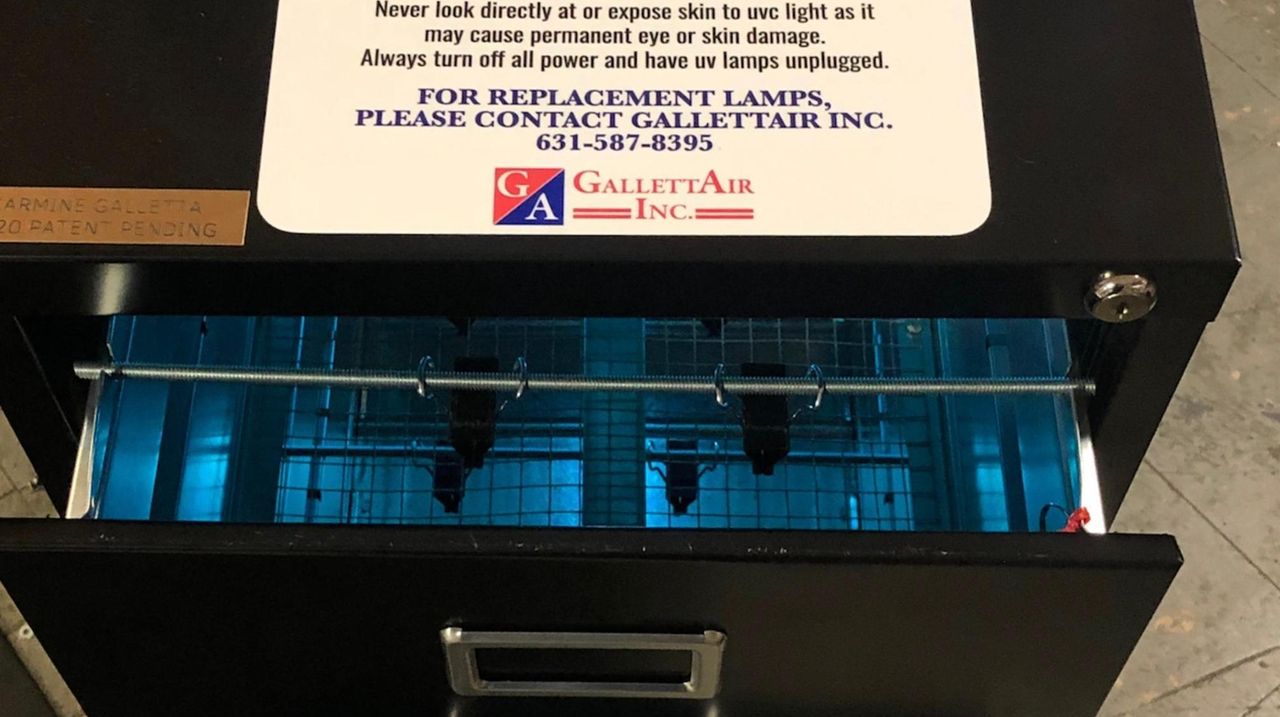 Suffolk County PBA president Noel DiGeralamo on May 5 talked about file cabinets that have been outfitted with UV light technology for sanitation purposes. The PBA will be donating the sanitation gear to SCPD's precincts.  Credit: Newsday Staff; Photo credit: Carmine Galleta

A Long Island heating and air conditioning company, hoping to protect cops and their families from the coronavirus, has donated 10 decontamination units made from filing cabinets and ultraviolet lights to the Suffolk police department.

Suffolk officers can use the decontamination units to sterilize masks and other personal protective equipment, as well as cellphones, radios and other electronics, said Carmine Galletta, president of GalletAir Inc., the West Babylon company that donated the devices.

“It is unconventional,” Galletta said, “but I knew it would work. UV light eradicates viruses and bacteria. It gets rid of everything.”

Suffolk Police Benevolent Association president Noel DiGerolamo, who helped coordinate the delivery of the units to the department’s seven precinct houses and other facilities, said the UV light cabinets will bring peace of mind to officers worried about exposing their loved ones to the deadly virus.

“Having the ability to sanitize and cleanse their equipment before they go home is very important,” DiGerolamo said, “so that they can find some comfort knowing they are not bringing the pathogen home to infect their family.”

The units will also help Suffolk police preserve supplies of masks and other PPE, Chief of Department Stuart Cameron said. The department began stocking up on PPE in January, he said, but its supply is not limitless.

“We stress to our officers that our supply of PPE is finite and that they need to reuse them as often as they can,” Cameron said.

Suffolk police officers share radios, tablets and other items, Cameron said, and the decontamination units will help the department prevent the cop-to-cop spread of the virus.

Suffolk police, Cameron said, were prepared for the pandemic — the department had worked with Louisiana State University researchers to develop national protocols for pandemics and bioweapon attacks in 2009. Even so, Cameron, added, the police department greatly appreciates the assistance it has received from the private sector in recent weeks. Several Long Island firms and private individuals have helped police sanitize patrol vehicles, which are shared by officers.

Galletta said he began thinking about ways his company could help first responders — and how to keep his 35 employees busy during the economic downturn — in the early weeks of the pandemic.

Through his decades of experience in the HVAC field, Galletta said, he knew UV light had long been used to sanitize homes and businesses. Researchers at Columbia University’s Center for Radiological Research reported last month that a narrow-wavelength band of UV light known as UVC — similar to the lights used in Galletta’s cabinets — can curtail transmission of the virus in indoor public spaces.

Along with GalletAir’s longtime service manager Paul Mazzeo, Galletta designed the units out of filing cabinets, UV lights and timers. Galletta said it takes 15 to 20 minutes to kill viruses and bacteria.

The company also distributed the units to the Town of Babylon as well as several Suffolk fire departments. The GalletAir team also constructed larger units for the Babylon Fire Department so firefighters could hang and sanitize Tyvek suits.

Galletta contacted DiGerolamo and offered to build some of the units for Suffolk police. The two-drawer decontamination cabinets were delivered to Suffolk police precincts this week.

Galletta said he is delivering units to the Saltaire police and fire departments later this week, and he has talked to the Nassau PBA about also building units for police in the county.

Galletta said he thinks UV light will play a key role in helping the world climb out of the coronavirus crisis.

“You are going to see a lot of this in the future,” Galletta said. “I will keep donating these as long as I can afford to do it.”

State: Virus positivity rate at 1.27%, the lowest since Oct. 22
0:48
Local music venues call for clarity on COVID guidelines
1:37
When was the last time you saw a dentist? COVID-19 fears take toll on care
U.S. unemployment claims fall to a pandemic low of 498,000
1:40
Student ambassadors encourage COVID-19 vaccinations
Lawmakers OK minimum staff levels for nursing homes, hospitals
Didn’t find what you were looking for?