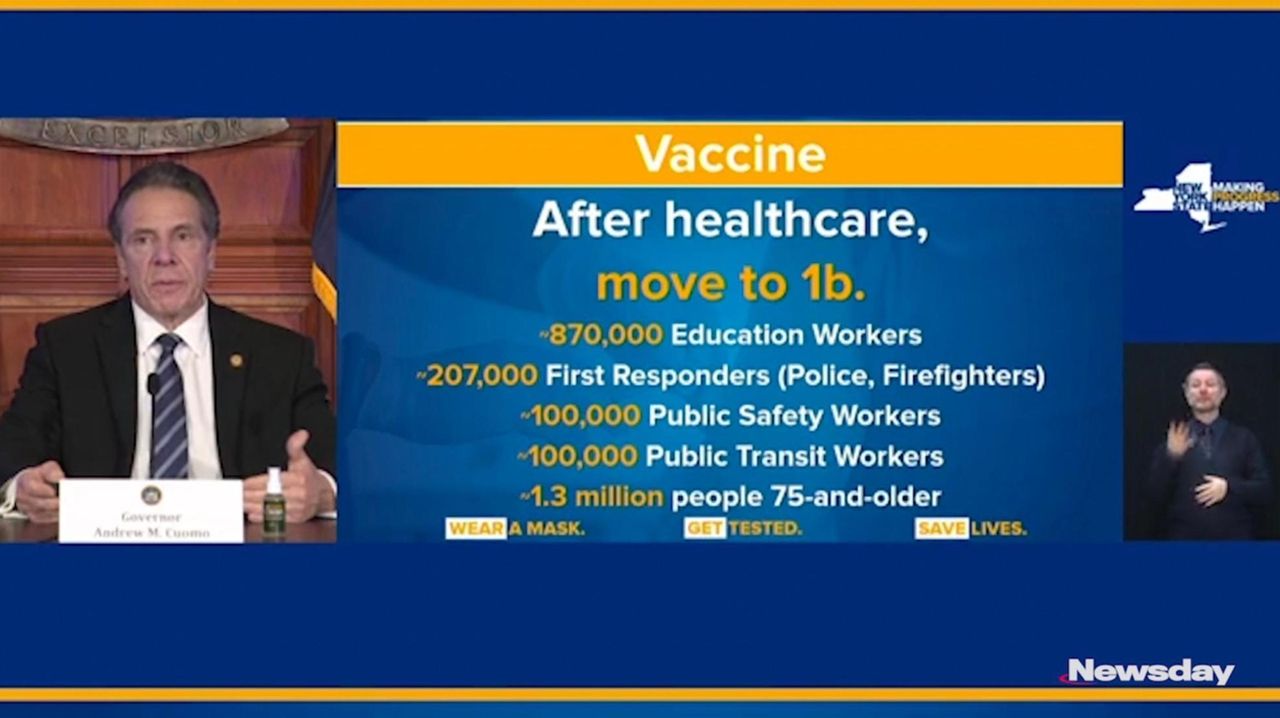 This story was reported by Jesse Coburn, Lisa L. Colangelo, David Reich-Hale and David Olson. It was written by Colangelo.

Pharmacists, urgent care centers and other health providers across Long Island said they are prepared to help ramp up COVID-19 vaccinations — once they get the needed doses.

Long Island health care providers are working with state officials, as well as Nassau and Suffolk officials, to reach as many people as possible once vaccines are available to larger swaths of the public. The state has identified thousands of potential vaccination sites with the help of local communities, Gov. Andrew M. Cuomo spokesman Colin Brennan wrote in an email Thursday.

"Additional sites ranging from community centers and churches to locations on SUNY and CUNY campuses continue to be identified and will be added to New York's growing vaccination network in the coming weeks," he said.

Independent pharmacy owners said they hope to have vaccines at their locations within a few weeks, adding hundreds of vaccination "pods" throughout Long Island, said Tom D’Angelo, the owner of Franklin Square Pharmacy.

"The state has asked us about storage, how many vaccinators we have, and how many people we can do per day," said D'Angelo, who is also president of the Pharmacists Society of the State of New York, which advocates on behalf of independent pharmacies. "We’ve given them all the information, and we are ready, as are other independent pharmacists."

A wide range of health care workers are among those first in line to get the vaccine, along with staff and residents of nursing homes. The next group, known as Phase 1B, includes teachers and education workers, first responders, public safety workers, public transit workers and people 75 and older.

Cuomo said in a media briefing Friday that those in Phase 1B could begin making appointments on Monday to receive vaccines — although health care workers would still be prioritized, and those in 1B may have to wait to actually get the shot.

"We need the hospital staff safe," he said, because health care workers could unknowingly spread the virus to others, and the state needs to make sure hospitals have enough staff to take care of patients amid a rise in coronavirus hospitalizations.

Cuomo's decision to allow vaccinations of those in 1B to begin came after pressure from New York City Mayor Bill de Blasio and other officials around the state.

There is no start date when vaccines will be available for members of the general public. Dr. Anthony Fauci, the nation’s leading infectious disease expert, told Newsday this week that New York State's general public could have access to vaccines as soon as April — if distribution speeds up over the next two weeks.

The federal government had a goal of vaccinating 20 million people by the end of 2020, but Fauci admitted distribution had been slow. With more than 22.1 million doses of the vaccine so far distributed across the United States, only about 6.7 million had been administered as of Friday morning, according to the Centers for Disease Control and Prevention.

President-elect Joe Biden on Friday said his administration would release nearly all vaccines after taking office later this month, which would increase the number of Americans who could receive the first dose of the double-dose vaccine.

Cuomo said Saturday the state had vaccinated 543,000 people. The CDC said that, as of Friday morning, more than 1.2 million vaccines had been distributed to New York State — although the state Friday provided a different total of about 909,000 vaccines received.

The number of COVID-19 vaccines being administered in New York State hospitals tripled this week, according to Cuomo, after he threatened to fine those who were not using their supply in a timely manner.

Cuomo on Tuesday said the state had approved 3,762 providers to serve as vaccine sites, with 713 on Long Island. Currently, 636 locations statewide are activated and vaccinating people in priority groups. Of those, 105 are on Long Island, with the majority being federally qualified health centers, hospitals and urgent care facilities.

Brennan, the Cuomo spokesman, did not respond to questions about whether the nine tent-like field hospitals built at SUNY Old Westbury and Stony Brook University in the spring for hundreds of millions of dollars — but never used — are being looked at as potential vaccination sites.

The heavy canvas roofs and walls, along with fixtures and equipment, were removed from the five Stony Brook structures and put in storage in preparation for the Dec. 16-17 snowstorm, complicating their possible use in the coming weeks.

County hubs being set up

"The more places that have the vaccine, the happier I will be," she said.

Each of the two sites likely will be able to vaccinate 500 people a day, seven days a week, as long as there is enough vaccine supply from the federal and state governments, County Health Commissioner Dr. Lawrence Eisenstein said Saturday.

Suffolk also has opened a vaccination center, but the county declined to disclose its location for security reasons. It will be open 12 hours a day, six days a week, with a goal of vaccinating about 1,000 people daily, according to Lisa Black, chief deputy county executive.

"One of our roles is to make sure there is equity in where the vaccine is available," she said. "It’s important that the pods aren’t only in Garden City, Mineola and New Hyde Park, but are also in Uniondale, Freeport and New Cassel. There has to be equity in all of this."

FQHCs could be key

Federally qualified health centers in Nassau and Suffolk could play key roles in making sure the vaccine gets to underserved populations. The centers provide care for low-income, underinsured and uninsured residents, as well as patients with Medicare, Medicaid and private insurance.

Long Island FQHC is setting up to give COVID-19 vaccines at its facilities in Elmont, Freeport, Hempstead, Oceanside, Roosevelt and Westbury, president and chief executive David Nemiroff said. They plan to start at 600 vaccinations a week in total at all their locations and increase from there.

Nemiroff said the facilities typically give out 14,000 to 20,000 vaccines a year, including for flu and childhood inoculations.

"The challenge for us will be scheduling because sometimes people cancel," he said. "We are probably going to get the Moderna vaccine, which has 10 doses per vial, and it’s only good for five hours after you open it."

Urgent cares, pharmacies are other outlets

With a large presence in communities across Nassau and Suffolk, pharmacies and urgent care centers are other important outlets for vaccinations.

ProHEALTH, which has urgent and primary care centers on Long Island and in New York City, said 12 of its sites were approved for vaccines.

The company already has used up its first shipment by vaccinating staff members and is awaiting confirmation of delivery of more doses for use at additional locations, said Dr. Ian Leber, ProHEALTH’s chief medical officer.

"We are very confident that, as a nimble organization with locations all across the metropolitan NYC region, we are perfectly suited to help our communities beat this virus," he said.

Nidhin Mohan, owner of New Island Pharmacy in Deer Park, said "it’s just a matter of when we get the vaccine. I’d start making appointments right away."

He receives at least 20 calls a day from customers asking if he has the vaccine, Mohan said.

Cuomo has asked police and fire departments, as well as unions representing teachers and transit workers, to handle vaccinating their own members in an effort to take pressure off hospitals and other hubs.

Nassau County Police Department spokesman Rich LeBrun said county health department staffers will inoculate officers at distribution sites. He said officers most at risk of contracting the virus and those most vulnerable to it because of factors such as age will receive the vaccines first.

"There's still a lot of logistical issues that have to be worked out," he said.

For one, he said, the department does not have any of the ultracold freezers needed to store the Pfizer vaccine. And DiBartolo said he believed Nassau would have to sign off on his medical workers administering vaccines.

Staffers who are EMS workers or EMTs are part of the current priority group being vaccinated. As of Wednesday, at least 40 members of his 100-person department already had received or been scheduled to get their first shot, DiBartolo said.

A union that represents 3,300 Long Island Rail Road employees said it does not have the capacity to vaccinate those workers, and would rely on the Metropolitan Transportation Authority to do so instead.

"Our union does not have the medical personnel or training to administer vaccines," said Anthony Simon, transportation division general chairman of the International Association of Sheet Metal, Air, Rail and Transportation Workers. "We are confident the MTA will administer vaccines to their employees, which comprise our membership."

LIRR president Phillip Eng said "details regarding implementation of the [MTA's] plan are being determined."

Matt Hamilton, a spokesman for New York State United Teachers, did not respond to questions about whether the union will administer vaccines to its members in accordance with the governor’s request.

In a statement on Friday, union president Andy Pallotta said it was "welcome news" that teachers and support staff could begin scheduling vaccine appointments on Monday.

"We understand that it will take time to immunize the millions in the 1A and 1B priority groups, and we look forward to the opportunity to learn more from the state on Monday about how NYSUT as a union can play a role in ensuring our members have reliable access to immunization," he said.

WHO CAN GET COVID-19 VACCINES

New York State announced it is expanding its vaccination program to include essential workers and people over 75 years of age, starting Monday, but the supply of vaccines is limited, and it may take until mid-April to have enough to cover the people in the two phases. Gov. Andrew M. Cuomo said health care workers will remain the priority over others in the expanded list. People in Phase 1B may start making reservations Monday at locations to be listed on a state website.

Group in Phase 1A (already eligible)

About 479,000 state residents have been vaccinated in this group, out of a total of 2.1 million. In this group, 430,000 doses remain unused. The state says it needs another million doses.

Group in Phase 1B (newly eligible)

About 3.2 million state residents are expected to become eligible Monday to be vaccinated in this group.