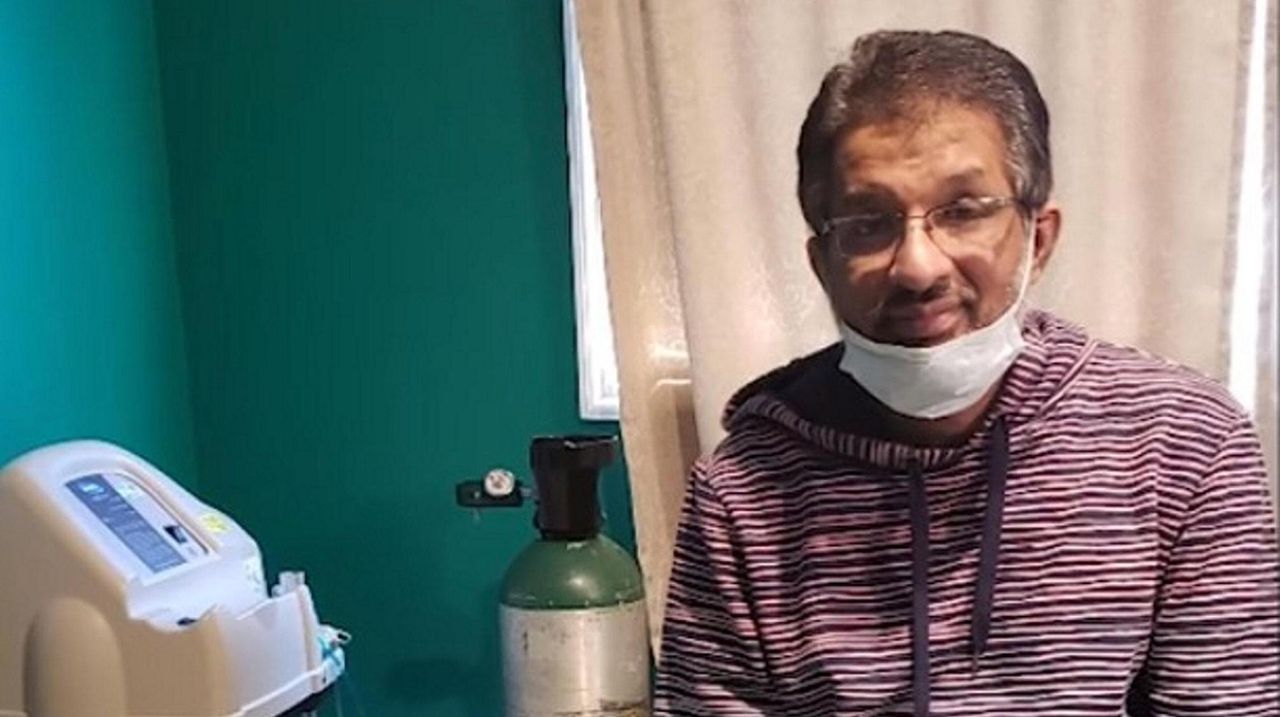 After 14 days on a ventilator, COVID-19 patient Robert Sidberry took his health into his own hands and ripped the plastic tube out of his mouth, setting off all kinds of alarms and bells.

Turned out, doctors found he could breathe sufficiently without the device and, after another week of recovery, he went home.

But COVID-19 leveled such a beating on his lungs and body that the 55-year-old said he came home April 15 and spent several days in bed hooked to an oxygen machine. He couldn’t walk, not for more than a few steps, he said.

He started the recommended physical rehabilitation, some arm twirls, but they left him so weak he needed the oxygen again.

Many people are emerging from COVID-19 hospital care with serious and continuing problems, health professionals say. The disease has kept people in a hospital bed for weeks if not longer. That’s weeks of being sick, eating little and exercising even less, they say.

The damage is especially hard on older people, some of whom need aftercare in a physical rehabilitation center or placement in a nursing home, said Dr. Maria Carney, medical director of post-acute medicine at Northwell Health.

“If they had a little trouble walking before, they have a lot now,” Carney said.

But even younger adults are finding they need additional care, she said.

Sidberry is visited twice a week by a nurse who checks his breathing, heartbeat and oxygen level.

Dr. Hugh Cassiere, medical director of Respiratory Services at North Shore University Hospital, said recovery will be daunting for many COVID-19 patients coming out of a hospital.

“I think what we are going to see in the next few weeks to months is a growing patient population that is going to need aggressive rehabilitation,” he said.

COVID-19 is proving to be a hard fighter against the human body. While doctors first focused on its damage to the lungs, they are now finding it can strike hard at the kidneys, heart, liver and even the brain.

Francine Quinn endured days of shortness of breath, a fever of 102 and body aches in her back, knees and ankles before being admitted to Good Samaritan Hospital in West Islip on March 29.

“Something was plaguing my lungs,” said Quinn, 41, of Commack.

Quinn was diagnosed with pneumonia in both lungs. She spent nine days on oxygen and hooked to IV antibiotics.

Pneumonia develops in the lungs after the coronavirus latches its spiky surface proteins to the receptors in healthy cells, Cassiere said.

“It’s like a lock and key,” Cassiere said. “Once inside the cell, it starts to replicate and shut down the machinery of the cell, and it kills the cell.”

As the disease makes the formerly light and airy lungs hard and brittle, some people develop a condition called Acute Respiratory Distress Syndrome, or ARDS, which causes widespread inflammation in the lungs, shortness of breath and rapid breathing. These patients often need the help of a ventilator to breathe, he said.

As the lungs inflame, they carry less oxygen to organs, which can cause the kidneys, lungs and liver to shut down, Cassiere said.

“It causes a huge amount of inflammation in the body,” he said. “Thirty to 40% of people in the ICU develop kidney injury.”

Some people with the virus also develop blood clots in their legs, lungs and arteries, which can cause heart attacks and strokes, Cassiere said.

Quinn was discharged on April 7 and came home exhausted, she said.

“Walking from the living room to the bathroom, I needed to take deep breaths,” she said. “Everything has made me exhausted.”

She said she’s trying to push herself more so she doesn’t fall back to just sitting around.

About a week ago, she started to feel a fever along with nausea. She went to the doctor and some tests were taken. She’s awaiting the results.

Quinn has been doing breathing exercises five times a day, inhaling hard on a plastic tube that raises and drops a pingpong ball in a plastic device.

“My mind tells me I’m back, but my body checks me on that,” Quinn said. “I’m past 30 days and the fatigue is still there.”

She also has a list of follow-up appointments to a pulmonologist, cardiologist and her primary care doctor.

“I also set up an appointment with an ophthalmologist,” she added. “I had eye pain during the illness.”

As Long Island hospitals move to discharge more COVID-19 patients than they admit, they are finding many patients require post-hospital care.

Older patients, in particular, may need a few weeks in a medical rehab center or even a permanent placement in a nursing home.

But skilled nursing facilities have been pushing back against accepting the COVID-19 patients, especially since some emerge from the hospital still sick with the virus.

These places are already battling outbreaks of COVID-19 in their facilities and worry about accepting new residents who need virus care as well as rehabilitation. The homes are also scrambling to overcome shortages in staff, equipment and supplies such as personal protective equipment and oxygen.

“We have nursing homes on Long Island and in the city who are saying we don’t have the staff so we can’t provide the care,” said Stephen Hanse, president of the New York State Health Facilities Association, a trade group that represents skilled nursing and assisted living facilities.

“The state is forcing them into it,” Hanse said.

The state Health Department issued guidelines on March 25 saying that nursing homes could not refuse a person simply because they were COVID-19 positive. Gov. Andrew M. Cuomo has defended the directive, which required nursing homes to accept from hospitals those virus patients who are deemed medically stable.  Nursing homes did not have to accept the patients if they could not care for them safely, Cuomo said.

If these medical handoffs fail to ensure that people make it safely through their recovery, hospitals could see patients returning to the emergency room, said David Grabowski, a Harvard Medical School professor of health care policy.

Grabowski estimated that 30% of patients hospitalized with COVID-19 will require facility-based care, and another 20% will require home care. He extrapolated his estimate by looking at data on patients with sepsis, a life-threatening reaction to infection, that has an inpatient mortality rate similar to coronavirus.

“It’s just not a good bet right now,” he said. “These people are going to need a lot of rehab and a lot of attention.”

Grabowski believes specialized centers of care need to be developed to treat people who are recovering from COVID-19 while they are potentially still contagious. This might include an unused building or a special wing of a hospital or nursing care facility, he said.

A need for oxygen

When Mushahid Farooqi was discharged from Northwell Manhasset Hospital, he was still having trouble breathing. He returned to his Bethpage home and was connected to an oxygen tank to help him breathe.

Farooqi, 49, had suffered pneumonia in both lungs and spent eight days in the hospital on oxygen.

When he was discharged, his hospital case manager arranged for five cylinders of oxygen and an oxygen concentrator, which manufactures oxygen using room air, to be delivered to his home.

“When I came home I was continually using the oxygen because I was short of breath,” he said. "One time, I went to a room without my oxygen concentrator, and it was very hard to breathe in there, so I had to come out and get it.”

Farooqi, an urgent care doctor himself, is also using an oximeter — a small device that clips onto a finger — to measure his oxygen level, and he then sets the correct amount of oxygen from the tank.

He also bought his own portable oxygen concentrator for $2,200. He had to use the oxygen for three weeks, switching between a tank when he was stationary to the portable machine when he wanted to move around.

Long Island hospitals, nursing homes and other post-hospital care centers are taking action to smooth the transfer of these patients from their hospital beds to home and other care settings.

“We’ve got to bridge the world of the community and hospital,” Carney said. “We’ve got to transition the care more smoothly from the hospital to next level of care.”

Some of these discharged patients also require social services, she said. They’ve lost jobs, have outstanding bills and have little money or access to food, she said.

For a long time, hospitals didn’t give a lot of attention to what happened after a patient was discharged, Grabowski said. More recently, that has changed because a high amount of hospital readmissions can impact the facility’s rating, he said.

South Nassau is using a team of home care staff who’ve recovered from COVID-19 to care for patients who still have an active case of the illness when they go home, said Nancy Helenek, administrative director of care continuum.

“We are also providing our patients with a surgical mask, which is to be worn during all home visits,” Helenek said.

“Our goal is to accelerate discharges while ensuring a high level of coordinated care,” O’Shaughnessy said.

COVID-19 hospital patients discharged to a CHS nursing home are “immediately brought to a designated COVID-19 area,” he said.

Two weeks after coming home, Robert Sidberry still sometimes sleeps hooked to the oxygen. When he speaks, his voice sounds heavy and low, as if it takes an effort to get the words out.

After some oatmeal with tea, he starts his exercises, mostly arm twirls and some leg lifts. Just a few minutes leaves him winded, he said.

Sidberry has diabetes and the blood thinners and steroids he received in the hospital shot up his blood-sugar level to more than 300. That, in itself, made him feel weak. His wife’s diet for him has brought it down.

Walking is coming back slowly, literally a few steps at a time. He’s yet to attempt stairs.

Twice a week he receives a visit from a visiting nurse who checks his oxygen level and pulse, and listens to his heart and lungs. He talks to his primary care doctor three times a week.

No one has told him how long it will take to recover. He figures two to three months.

“Little by little,” he said. “Every day a little.”

Reopening economy requires more testing, experts sayExperts tracking the pandemic say hundreds of thousands of seemingly healthy people need to be tested for coronavirus every day — and perhaps millions. Why blood tests for Covid-19 antibodies have become keyKnown as a serosurvey, such widespread testing will come next as the focus shifts to reopening the economy. Army of contact tracers crucial to containing coronavirus spreadGov. Cuomo's plan to reopen the economy hinges on hiring and training them across LI and beyond at an unprecedented scale, officials say.   Making sense of COVID-19 testingWe have answers to key questions about coronavirus testing as Long Island, New York and the nation work toward facilitating it on a mass scale.