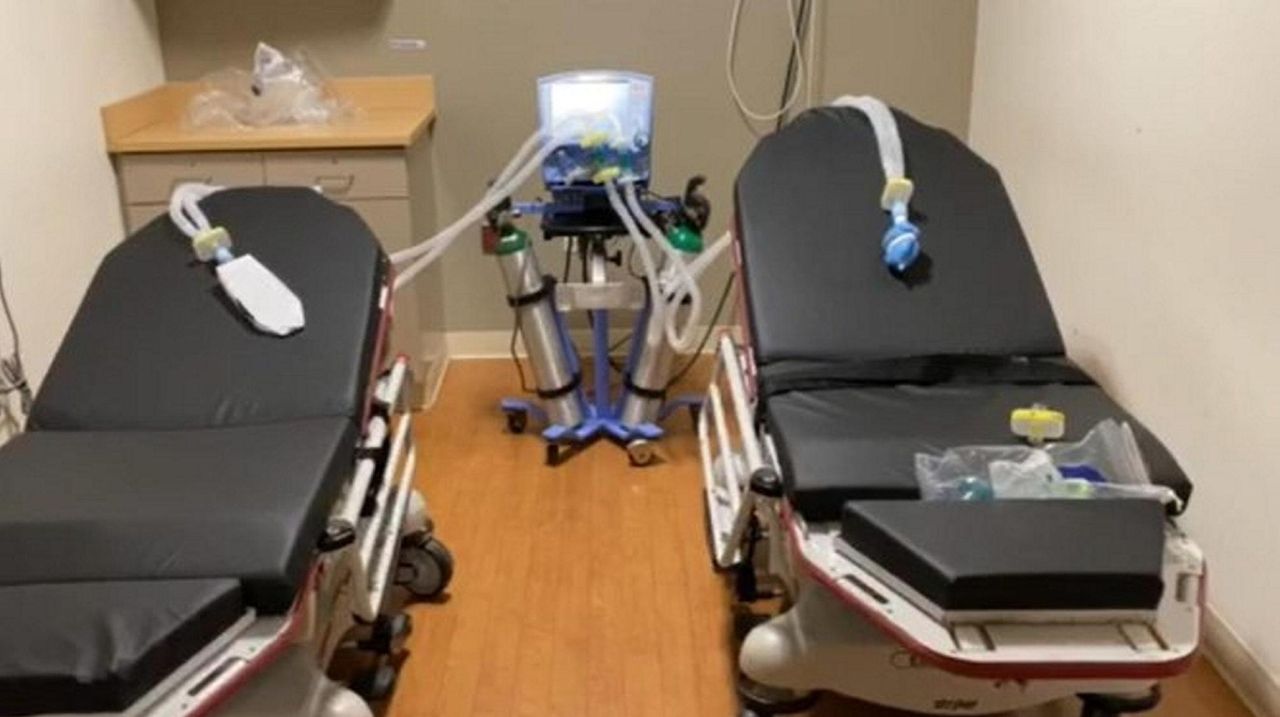 Laboratory research is underway at Stony Brook University Hospital into how to modify ventilators so one can accommodate two COVID-19 patients — in case the hospital's supply of the breathing machines runs short amid the coronavirus crisis.

"Obviously ventilators, as has been discussed in briefings of the president and the [New York] governor, are of limited supply," said Dr. Mohamed Mansour, a critical care/pulmonologist physician and director of the hospital's Medical Intensive Care Unit. "This would be only in effect when the hospital system’s supply of ventilators are stretched to the max," he added, noting they are not at that point.

Mansour said the hospital recently began its research. The hospital released a video showing the setup where tubes run from opposite sides of the ventilator and can be attached to two patients at the same time.

"It is really a last resort mechanism that we would not go to unless we are running short of ventilators," Mansour said Friday. "Then we would start to get creative. But we don’t want to wait to that point; we want to be proactive."

New York-Presbyterian Hospital already has begun "ventilation sharing," as was reported by The New York Times. In a statement late Friday, New York-Presbyterian said: "A team of physicians from New York-Presbyterian and Columbia University Irving Medical Center has developed and implemented a strategy that, in carefully selected patients under the right conditions, enables a single mechanical ventilator to fully support two patients simultaneously."

The statement went on to say the hospital has shared a "detailed protocol" with other hospital systems and the state with the aim of helping hospitals address a "critical shortage of these lifesaving machines by increasing the number of patients" who can be supported by them.

Mansour noted various medical societies had expressed concerns about having two patients on one ventilator. He said Stony Brook researchers were developing ways to address those cautions to ensure patient safety.

"This concept of splitting or sharing a ventilator has been around for some time," Mansour said. He said the concerns centered on the inability to monitor the conditions of both patients on one ventilator.

"Simply put," Mansour said, "it's using a piece of equipment in a way other than initially intended and designed." He said a ventilator being used on one person "gives you feedback regarding one person, like how much pressure that’s in the ventilator, how hard it has to push to give the patient the amount of air required for their body. When you split the system, that is no longer the case, so you lose that feedback," he said.

"One person may have obstructed lungs. They might have difference in resistance in their airways. You lose that ability to individually monitor," Mansour said.

The challenge for Stony Brook researchers, Mansour said, was to find ways for the ventilator to provide the information for both patients hooked up to it simultaneously, and react to each individual's needs.

Mansour said Stony Brook was cognizant of the medical societies' cautions, noting many had stressed the need "to make things as equal as possible." He added in an email later, "Putting two patients on one ventilator requires matching patients with similar characteristics to avoid one patient being overventilated and the other being underventilated."

"What we’re doing is … putting devices in the circuit of the ventilator that can evenly distribute the volume of air and pressure each person is getting, and to monitor it," Mansour said of the laboratory research that has not involved any patients.

"We just look forward to sharing our findings once our experiments are done," he added. "We’ve been doing this over the last week. We’ve made some incredible progress. Hopefully by next week, we hope to have some preliminary data," noting it has been a "very rapid" process necessitated by the coronavirus' spread.