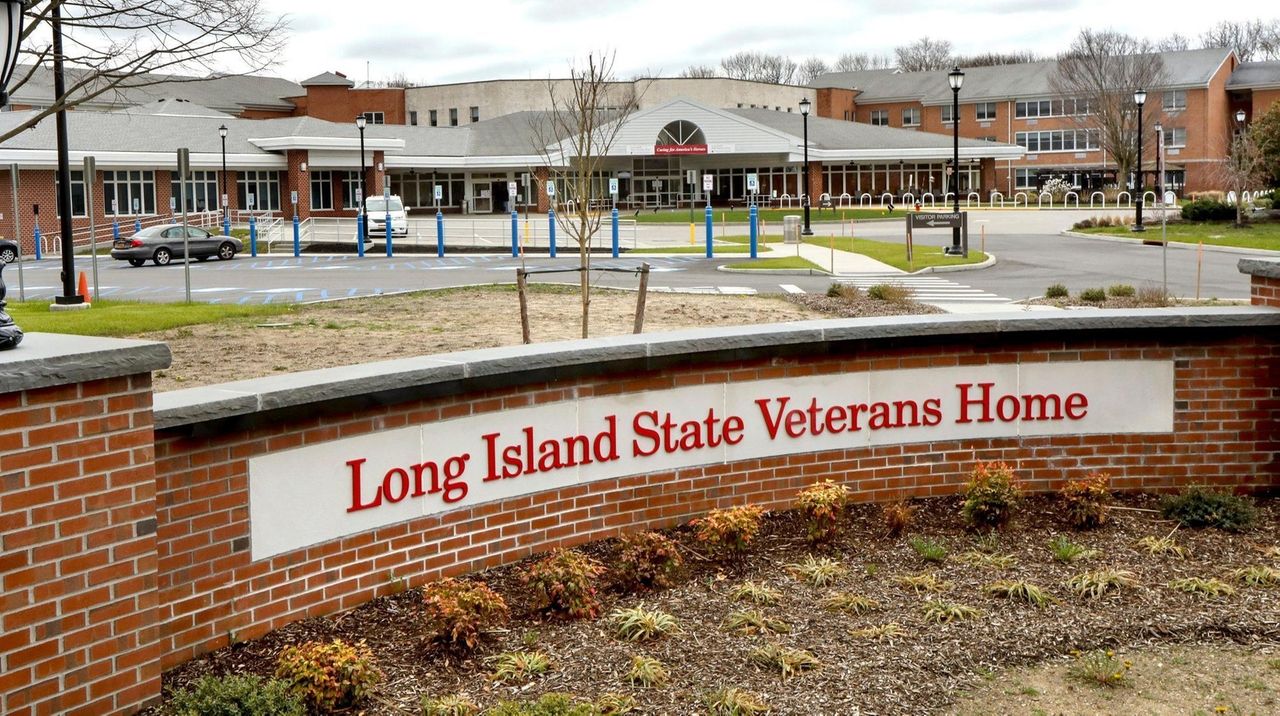 Kathy Caruso of East Northport, whose 99-year-old father, John Milone, was a patient at the Long Island State Nursing Home, discusses her experience there.   Credit: Newsday

Forty-six residents have died of COVID-19 at the Long Island State Veterans Home in Stony Brook, the largest publicly reported death toll at a Long Island nursing facility, where the executive director described the disease as “the most wicked terrorist you could ever face.”

The management of the 350-bed facility serving veterans last week sent out an email and flyer to civic groups with an urgent plea that staff members needed supplies of personal protective equipment for their safety.

At the same time, the daughter of one resident complained that the home had failed to isolate coronavirus patients.

“I kept saying, ‘Isolate before it’s too late. You can’t just assume everybody’s going to get this,’” said Kathy Caruso of East Northport, whose 99-year-old father, John Milone, was a patient at the veteran’s home until he was moved to Stony Brook Hospital for COVID-19 treatment, including an oxygen supply.

Fatalities rose from 32 as of Friday to 46 on Tuesday, according to a letter posted on the home’s website. An additional 51 residents have tested positive for COVID-19, with nine more suspected cases awaiting confirmation.

Of 114 employees tested, 53 were found to carry the virus and eight are awaiting test results at home, according to a letter from the facility.

Statistics released by the state appear to undercount deaths in individual homes, in part because the state relieved them in March of having to test residents for the coronavirus. Facing a shortage of tests, the state said nursing homes should focus instead on isolating and treating those with symptoms.

In contrast, the Long Island State Veterans Home has posted on its website tallies of infections among residents and workers, as well as deaths attributed to the virus both at the facility and of patients moved to hospitals.

“We've been transparent since Day One,” executive director Fred Sganga said in an interview. “We made a decision here to always go public because we're fighting an invisible enemy. This COVID-19 is like the most wicked terrorist you could ever face.”

“Who's got it? Who doesn't have it?” he added. “It's almost like an impossible battle.”

Sganga said his nursing home and others are scrambling for personal protective equipment like masks, disposable gowns and face shields.

“The story that has to be told is that in the big spectrum of things, nobody's really put nursing homes high on the PPE list,” he said. “And we should have been one of the first ones to be put on that list, in terms of the vulnerable population that we're caring for.”

Responding to his urgent plea, the town of Brookhaven donated gowns. Sganga estimated that the home has a seven- to 10-day supply. Sganga, in a statement Thursday night, said the home has “an adequate amount of supplies, which are replenished from a variety of sources on a daily basis.” He said the donations from groups have been "overwhelming and heartwarming.”

Caruso believes the home failed to quarantine COVID-19 patients based on a conversation she had with one of her father’s caregivers on April 1.

The staff member reported that the first infected patient in her father’s 25-person unit was walking around the hallways and was not required to wear a mask, Caruso said.

“He’s not isolated. He’s just walking around here with everyone else,” she said she was told.

Caruso said that when she complained to the executive director, he responded that the home was doing its best under guidelines issued by the federal Centers for Disease Control and Prevention. She said he wouldn’t listen to her suggestion about isolating infected patients in areas set aside for adult day care residents that had been closed for weeks.

About 10 days later, her father developed a cough, she said. He was tested for COVID-19 and the next day, Easter Sunday, he was moved to the hospital, where he has been needing an increased amount of oxygen.

Asked about Caruso’s account, the Long Island State Veterans Home did not address specific allegations. Instead, it responded with a written statement: “We are prohibited under HIPAA privacy laws from talking about our residents. What we can tell you is that strict adherence to CDC, Centers for Medicare & Medicaid Services, Veterans Affairs and NYSDOH guidelines is always part of our clinical protocol, and that safety and quality of care are our highest priorities.”

Before the case emerged in Caruso’s father’s unit, the nursing home said it was quarantining its first cases.

“All residents effected are under proper quarantine restrictions (both here and at the hospital) and we have made proper notifications to the New York State Department of Health and the Veterans Administration,” according to the letter to family members.

Kristen Kaplan, of Holtsville, praised the care that the staff has given her father, Robert Honadel, since 2014. Honadel, a 75-year-old Navy veteran, suffers with Parkinson’s disease. He tested positive for COVID-19 at the facility on Saturday.

“They take care of these men like family. They laugh with us, they cry with us. There’s no doubt in my mind they do everything they can do to protect them,” Kaplan said, adding, “Their transparency and honesty with what’s been happening is above and beyond."

Sganga attributed the high number of deaths at his facility in part to the fact that 90% of its population is male. In New York, men made up 60% of the state’s 15,302 deaths, according to the latest data.

The veterans home did not report the average age of the residents who have died.

Reopening economy requires more testing, experts sayExperts tracking the pandemic say hundreds of thousands of seemingly healthy people need to be tested for coronavirus every day — and perhaps millions. Why blood tests for Covid-19 antibodies have become keyKnown as a serosurvey, such widespread testing will come next as the focus shifts to reopening the economy. Army of contact tracers crucial to containing coronavirus spreadGov. Cuomo's plan to reopen the economy hinges on hiring and training them across LI and beyond at an unprecedented scale, officials say.   Making sense of COVID-19 testingWe have answers to key questions about coronavirus testing as Long Island, New York and the nation work toward facilitating it on a mass scale.