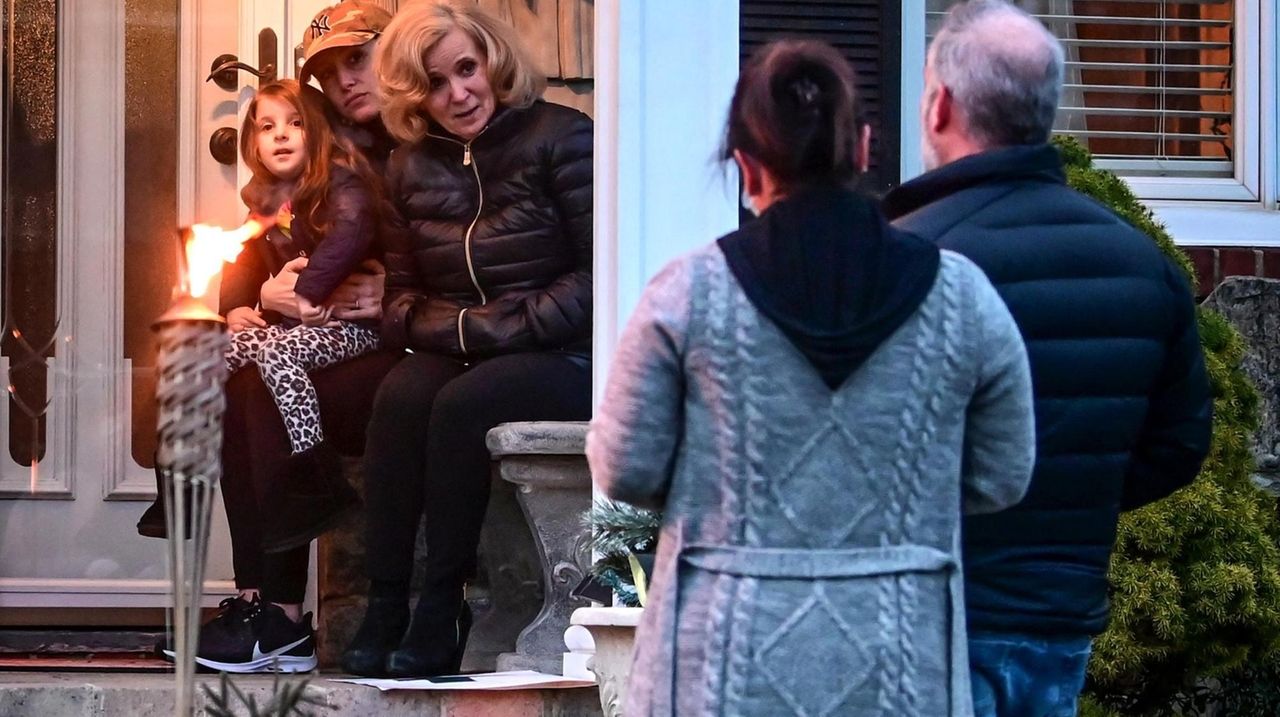 The family of Michael Giangrande Sr., a Bellmore man who died Sunday from complications of the coronavirus, talks about the candlelight vigil they held for him on the stoop of their home. Credit: Newsday / Thomas A. Ferrara

As members of the Giangrande family watched from the porch on Monday, some 50 friends and neighbors solemnly walked up the family's sidewalk in Bellmore and placed candles on the steps, careful to follow social distancing guidelines, to pay homage to Michael Giangrande Sr., who died early Easter morning after battling COVID-19.

"We sat on the porch and then, one by one — 6 feet apart — they came around the corner holding candles," Michael Giangrande Jr. said. "They put the candle on the steps in front of us. It was really heartwarming to see the community and neighbors coming together to show respect for my father."

Michael Giangrande Jr., his wife, Joy, their three children — Alexa, 3, and sons Aiden, 9, and Luke, 7 — and Michael's mother, Patricia Giangrande, bore witness at his parent's home as the vigil unfolded.

During a time when the coronavirus, which causes the disease COVID-19, has prompted government rules limiting gatherings to a maximum of 10 people, and social distancing guidelines of at least 6 feet, a traditional wake and a "proper funeral" was not possible for the "large, extended Italian family," Michael Jr. said. He added the family was "lucky" his father already had a burial plot, where he will be "put to rest" on Friday. Only 10 people can attend.

Michael Jr. said social media helped the family grieve, through reminiscences about the man known affectionately as the "Mayor of Bellmore," or the "Mayor of Martin Avenue." He said "We had over 800 comments" on Facebook. "And then some of our close friends and neighbors came up with this idea of showing their respect to my mom and to my father" through the candlelight vigil.

Denise Gajda, of Merrick, a longtime a friend of Michael and Joy Giangrande, said she wanted to offer comfort.

"They're like family … so I feel like when one of us are hurting, we’re all hurting. I knew I had to do something," but it had to be done "safely." She wore a face mask and gloves, as did others.

Gajda added, "It was unimaginable to me during this time, not being able to receive a hug … So we had to do something as safe as possible, but comforting — for them and us."

Michael Giangrande said, "My mom was very touched by everyone’s kind words and the showing of the deepest respect for my father. Being quarantined and not having the proper funeral service, to see people go out of their way to come and show their respect … really meant a lot."

Patricia and Michael Giangrande Sr. had been married 53 years, their son said in a phone interview Wednesday.

The vigil was "just a testament to who my dad was," said Anthony Giangrande, the eldest of three sons, which includes William Giangrande of Wantagh. "He just touched so many lives over his life," Anthony said by phone from his home in Windermere, Florida. "Dad was a force."

Michael Jr. said a Facebook post written by a cousin, Steven Giangrande of East Setauket, captured the essence of his father's life. It read in part: "How can someone who had just a great impact on the lives of so many be dealt this fate? … Here’s what I came up with. Mike Giangrande was a person who was there for everyone. A great husband, father, grandfather … A person who was a giver, mentor, caretaker, friend, helper for all," Steven Giangrande wrote. "So I guess it is fitting that he be taken from us on Easter Sunday. If this day was the day that our Lord ascended into heaven, I think this is a day reserved for only the best who ascend into heaven."

Both sons noted their father had been a healthy, energetic 78-year-old retiree from Con Edison who had an active social life, until he was felled by the virus.

"It’s very comforting to know he lived a great life and he left this world on a high note," Anthony said. "Other than the virus, he was healthy. He had that young spirit. It wasn’t like he was sitting in a chair and really aging and losing sight of who he was."

Besides his wife and sons, survivors include sister Patricia Fabiano, of Plainview, and four grandchildren.