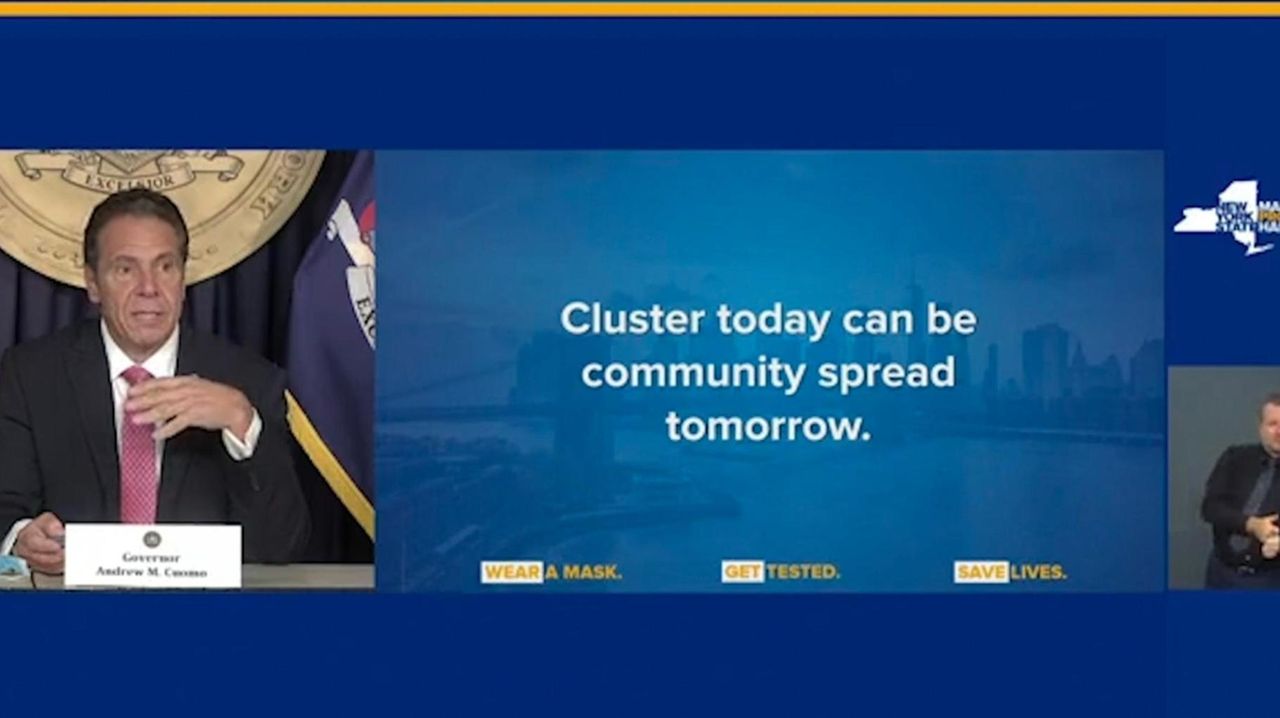 On Tuesday, Gov. Andrew M. Cuomo said he is concerned about the rising infection rates in some areas of New York. The positivity level for COVID-19 in 20 "hot spot" ZIP codes has reached 5% or "up to five times the normal state rate" for daily new cases, Cuomo said. Credit: NY Governor's Office

This story was reported by Matthew Chayes, Bart Jones, Carl MacGowan, Antonio Planas, David Reich-Hale and Joie Tyrrell. It was written by Jones.

New York is facing its most serious resurgence of COVID-19 cases since the virus was brought under control months ago, state and city officials said Tuesday, as infection levels reached five times the state's rate in 20 "hot spot" ZIP codes.

Starting immediately, failing to wear a mask in those ZIP codes will subject the violator to a fine if the person refuses to do so when one is offered by a city enforcement agent, he said.

The infection level has soared to an average of 5% in the "hot spots," compared to the statewide positivity rate of about 1%, said Gov. Andrew M. Cuomo.

The hot spots also include parts of Rockland and Orange counties, he said. "This is probably the largest cluster that we have addressed before," Cuomo said at a news briefing in Manhattan. "These are embers that are starting to catch fire in dry grass. Send all the firefighting equipment and personnel to those embers and stamp out the embers right away."

Cuomo indicated that much of the outbreak is centered in Orthodox Jewish communities, after New York City health officials, along with some Jewish doctors on Long Island, had expressed concerns about lack of compliance with mask wearing and social distancing rules. He said he plans to meet with religious leaders and public officials from the affected areas.

City and state officials gave differing numbers on what the infection level has risen to in New York City, because they track the test results differently. While the city cited a high 3.25% positivity rate for Sunday, the state measured that day's percent positive for the city at 1.6% of people tested.

The state reported New York City's positivity rate at 1.3% on Tuesday for test results from the previous day.

Whatever the case, officials across the board were sounding the alarm over what is the most serious threat so far to New York maintaining some of the lowest infection rates in the country, months after it was the epicenter of the pandemic in the United States.

"Attack these clusters," Cuomo declared, as he again criticized local governments for what he called their failure to sufficiently enforce state laws aimed at curbing the virus. He also repeated his offer to send 200 rapid-testing machines to key neighborhoods.

De Blasio threatened to impose stricter measures in the neighborhoods with clusters — including again closing nonessential businesses and banning most gatherings — if the infection level continues to rise.

While Cuomo said that he doesn't believe "we are at the point of rolling back anything," he added that "if the local governments do not do the compliance and attack the cluster, you will be there in the short-term future."

De Blasio has said that the public schools would close if the rate of infection over seven days met or exceeded a 3% rolling average. The current rate is 1.38%.

Clusters make up 25% of cases

The clusters represent 25% of city cases, even though people who live there represent just 7% of the population.

Some of the ZIP codes — there are about 150 in the city — have large Orthodox Jewish populations, the city had indicated, though Dr. Mitch Katz, head of the city’s public hospital system, said he believed there was growing compliance over the weekend and during the Yom Kippur holiday, one of the most crowded days of worship.

"Multiple leaders reported that in their synagogues everyone was wearing a mask and that people were keeping their distance," Katz said.

Cuomo said Tuesday that "these public health rules apply to every religion," and noted that, even though he is a Roman Catholic, he canceled this year's St. Patrick's Day parade because of the threat of the virus spreading.

Overall, the positivity rate in New York is at 1.3%, though it decreases to 1.1% if the "hot spots" are not included, Cuomo said. Two state residents died of coronavirus-related causes on Monday, while 1,198 new cases of the virus were confirmed through testing.

The state on Tuesday added Colorado to the list of states and territories from which travelers must quarantine here for 14 days upon arrival because of high levels of coronavirus infection in those areas. Arizona and Virginia were removed from the list, which numbers 33 states and territories.

State Liquor Authority agents and State Police inspected 1,075 businesses on Monday, and issued summonses to three of them for violating laws aimed at curbing spread of the coronavirus.

The state suspended the liquor licenses of 16 more bars or restaurants because of violations. They include four on Long Island: Giorgio's Catering in Calverton; Vintage Sports Bar in Wantagh; Prohibition in Massapequa Park, and Patio Italian Kitchen in Saint James.

Hospitals and schools on Long Island

Meanwhile, Northwell Health on Tuesday said it had 94 COVID-19 patients at the 19 hospitals it owns and operates, within the range of between 65 and 95 patients it has reported for the last two months.

School Principal Jordan Margolis wrote a memo to parents saying the individual was not present at the school Tuesday. Margolis said in the memo a Back to School Night was postponed so custodians could deeply clean and disinfect the building. The district did not say whether the positive case was a student or school employee, and said the individual would not be allowed to return to the school for at least 10 days or after presenting a negative test result, Margolis wrote.

A staff member at Riverhead High School tested positive for COVID-19 and was required to quarantine, interim Superintendent Christine Tona said in a letter to parents dated Friday.

The East Meadow School District said Tuesday a student at Parkway Elementary School tested positive for COVID-19, but the school will not shut down.

Following the reopening of casinos earlier this month, the hotel at Jake’s 58 in Islandia will partially reopen Thursday, Buffalo-based hotel owner Delaware North said. The hotel has been closed since March.

Delaware North said the hotel would reopen at 33% capacity, with 75 of its 227 rooms available. The Suffolk OTB video lottery casino at Jake’s 58 reopened on Sept. 9 at 25% capacity.

Cuomo also appointed members of a clinical advisory task force to review for safety and effectiveness any vaccines that become available for the coronavirus after the FDA approves them.

The members include two from Long Island: Dr. Sharon Nachman of the Renaissance School of Medicine at Stony Brook University, and Dr. Bruce Farber of Northwell Health.

"We want to make sure we can tell New Yorkers the vaccine is safe and then we want to have a distribution plan," Cuomo said. "There are polls that say half the American people wouldn't take the vaccine right now because they don't believe it's safe. I want to be able to say to New Yorkers it is safe, take it, and I want to have the best distribution because ideally we want to be the first COVID-safe state in the nation."

Travelers in New York State’s “travel advisory” list, due to community spread of the COVID-19 virus, are required to quarantine for 14 days. The quarantine applies to any person arriving from an area with a positive test rate higher than 10 per 100,000 residents over a seven-day rolling average, or an area with a 10% or higher positivity rate over a seven-day rolling average. The following is the updated list of states and other jurisdictions whose travelers face those restrictions in New York as of Sept. 29: