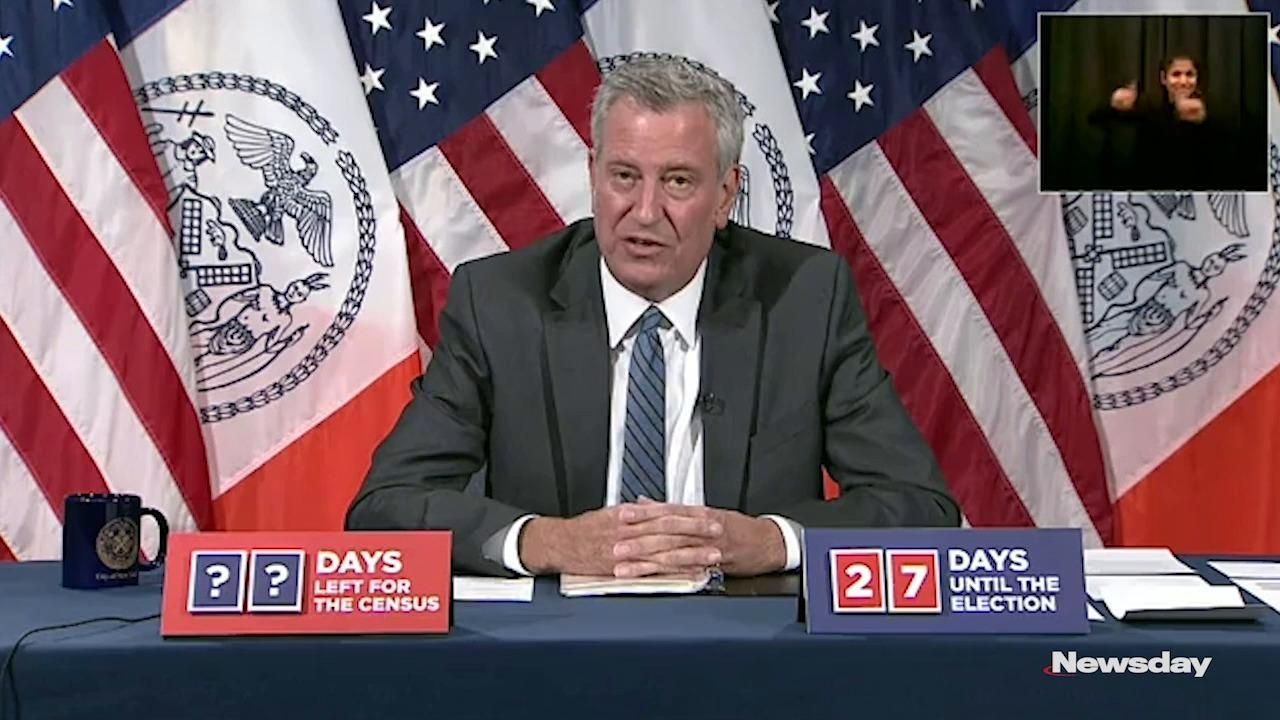 This story was reported by Matthew Chayes, Jesse Coburn, Candice Ferrette, Joan Gralla, Bart Jones and Yancey Roy. It was written by Jones.

New York City on Thursday will start imposing new restrictions aimed at curbing spread of the coronavirus in "hot spot" neighborhoods despite a night of protests that turned violent in one Brooklyn neighborhood, officials said, while a major public high school on Long Island will remain shut until Oct. 14 because of an uptick of COVID-19 cases.

Hundreds packed the streets of Brooklyn's Borough Park late Tuesday night to protest Gov. Andrew M. Cuomo’s restrictions on gatherings in houses of worship. The demonstrations devolved into the beating of a man who was recording the unrest and at least one fire set in the street, according to video posted on Twitter.

"Some people are unhappy, I understand it," Cuomo said in a telephonic conference with reporters Wednesday. But "these limitations are better than going back to closed down."

The restrictions, announced Tuesday by Cuomo and to be implemented by Friday, limit houses of worship to no more than 10 people, prohibit mass gatherings, and close down schools and nonessential businesses in coronavirus "hot spots" in New York City, upstate Binghamton and Rockland and Orange counties.

The restrictions establish red, orange and yellow zones based on the severity of COVID-19 spread and apply different levels of limits on worship, schools, businesses and gatherings.

Late Wednesday, the city posted an interactive "COVID-19 Zone Finder" online that shows users whether an address is subject to the new restrictions, and which ones.

Some of those city neighborhoods have large Orthodox Jewish populations, and the restrictions have provoked anger among community leaders and the faithful.

He added: "To the extent that there are communities that are upset, that’s because they weren’t following the original rule."

But people at the protests called the measures unfair.

"You are my soldiers! We are at war!" resident Heshy Tischler, who is running for City Council, shouted, without a mask, into a bullhorn, to a group of other Orthodox Jews. An NYPD supervisor stood several feet away, according to the video.

"Jewish lives matter!" some shouted in another clip.

The beaten man, later shown on a stretcher, was taken to a hospital after being attacked with rocks, according to video posted by Jewish Insider reporter Jacob Kornbluh. The city did not report any arrests at the protest.

In a tweet, the New York City Sheriff's Office said it had responded to a disturbance early Wednesday morning in Borough Park, where a large crowd — not wearing masks — started a fire on the roadway. City firefighters had to request permission to withdraw from the scene "due to safety concerns," the tweet said, and deputy sheriffs had to take into protective custody "a person being harassed and surrounded by a large crowd."

The state’s restrictions are expected to last at least two weeks — and could last longer, New York City Mayor Bill de Blasio said Wednesday. He said they will be implemented starting Thursday.

"We need to stop this outbreak dead in its tracks for the good of all of New York City. Remember. We need to do it to save lives," de Blasio said.

De Blasio warned that the police "will not tolerate" violent protests.

"People have and will protest, and we understand that there's a place for peaceful protest. But the NYPD will not tolerate people doing harm to others," he said. "There will be no tolerance for assaults, for damage to property, for setting fires. Anything like that is unacceptable."

Borough Park is one of nine hot spot areas where the city reported Tuesday that COVID-19 positivity rates have remained over 3% for at least seven consecutive days.

The state on Wednesday updated its own list of 20 hot post ZIP codes for spread ranging from 2.3% to 17.7% of new positives over a seven-day average, including 11 in Brooklyn and three in Queens. None were on Long Island.

While the state had pointed to parts of Nassau County around the Five Towns area, including Inwood and Lawrence, for a recent spike in COVID-19 positives, that part of the county was not designated a hot spot subject to the new restrictions.

Nassau County Executive Laura Curran said Wednesday that the county is "closely monitoring all positive cases to identify areas of concern as they change."

"I am happy to say that there are no Nassau ZIP codes in the top 20 in the state, so we want to keep it that way," Curran added. "Together we have crushed the curve of this virus and we have seen the percentage of Nassau residents testing positive out of all being tested hover around 1 percent these past few months."

Curran said she has been speaking regularly with leaders in the county's Orthodox Jewish community and with faith leaders and elected officials and other community leaders to make sure they work together to keep the virus under control.

"We cannot go backward," she said. "We cannot afford to have businesses, schools, religious institutions shut down again."

Cuomo said the level of positivity for COVID-19 was 5.1% in the hot spots, but 1.05% in the rest of the state, excluding the hot spots. The state's rate was 1.25% when all the tests were included.

Eight people died of coronavirus-related causes in the state on Tuesday.

The number of new confirmed cases from test results completed Tuesday was 124 in Nassau County, 109 in Suffolk County and 548 in New York City.

On Wednesday, Cuomo also criticized President Donald Trump for saying there should be no negotiations on possible state and local aid, calling it "the height of unreasonableness."

Cuomo said he will not take any action for the time being to plug the state’s deficit, which he put at $30 billion for the state over the next two years and $12 billion for the Metropolitan Transportation Authority. He charged that the shortfall resulted from federal negligence. The deficit would rise to $50 billion over two years if local governments are included, according to Cuomo's estimates.

Curran: No red zones in Nassau County and 'We want to keep it that way' Nassau County Executive Laura Curran on Wednesday held a news conference in Mineola to talk about the Cluster Action Initiative introduced by Gov. Andrew M. Cuomo and how Nassau residents must remain vigilant to avoid any red zones appearing in the county. Credit: James Carbone

Fifteen people at the school have tested positive for the virus, Pellettieri wrote, and contact tracing has revealed they may have been in contact with hundreds of students and nearly two dozen staff members. The school has been closed since last Thursday.

In a letter Friday, Pellettieri wrote that five infected students attended the same "social event’ on the weekend of Sept. 25. District spokeswoman Deirdre Gilligan said the district would not provide additional information about the event.

The Montauk School was closed Wednesday and also will be on Thursday after an employee tested positive for the coronavirus, the school said.

A Riverhead High School student tested positive for the virus, and an instructional staff member at Aquebogue Elementary School, in Riverhead, has exhibited symptoms of COVID-19, interim schools Superintendent Christine Tona said in a letter.

One student at the George McVey Elementary School in East Meadow tested positive on Tuesday, according to the state’s school COVID-19 report card.

A student at Mattlin Middle School and another at Judy Jacobs Parkway Elementary School, both in Plainview, tested positive, said a letter from Plainview-Old Bethpage Schools Superintendent Mary O’Meara. Both schools will remain open.

The Farmingdale schools reported a student at Farmingdale High School tested positive and any people exposed had been notified. The school was "safe to open," said a letter from Superintendent Paul Defendini.

Cuomo’s rule forbidding New York City restaurants from serving customers after midnight will stay in place after a federal judge rejected a bid to block it.

Columbia Ale House Inc., which operates The Graham tavern in Brooklyn, had filed a federal lawsuit seeking to undo the rule and requested a preliminary injunction to block the state from enforcing it. But in a ruling handed down late Tuesday, U.S. District Judge Brian Cogan rejected the tavern’s argument, saying the dangers of the coronavirus pandemic provided a rational basis for curbing activity.

"It just seems to me where good-faith arguments can be made by both sides on the many issues raised by the pandemic, it has got to be up to the governor, not the courts, to balance the competing public and business interests unless I consider something that the state has done to be irrational, and I really cannot find that," Cogan said, according to a transcript of the proceeding. "Therefore, the motion for a preliminary injunction is denied."

In its lawsuit, Columbia had argued the midnight rule was arbitrary in part because it applied only to restaurants in the city's five boroughs. It said a considerable part of its revenue came from post-midnight customers and the restriction was a hardship.