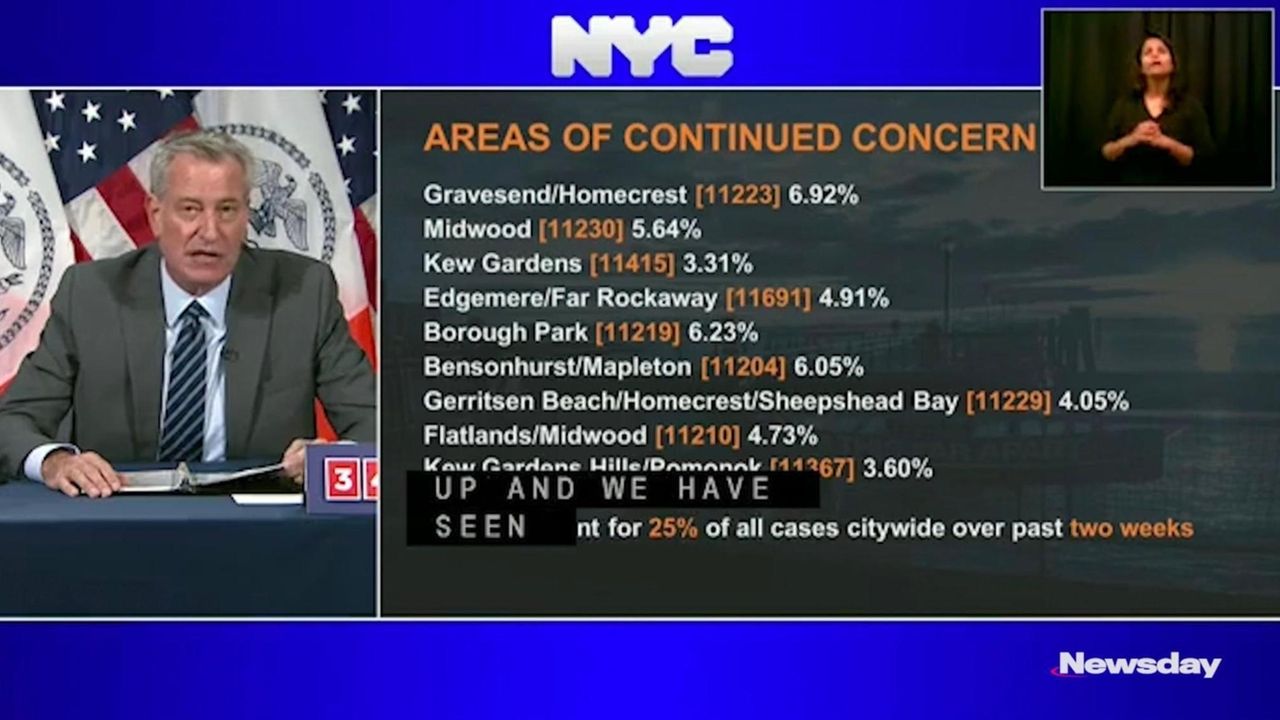 On Wednesday, during his morning news briefing, Mayor Bill de Blasio talked about the cluster neighborhoods that have increased the infection rate in NYC and the opening of indoor dining at 25% capacity today. Credit: NY Mayor's Office

This story was reported by Rachelle Blidner, Matthew Chayes, Scott Eidler, Thomas Maier, Bart Jones and Carol Polsky. It was written by Jones.

State and city officials are launching a campaign to stop spread of the coronavirus in "hot spot" clusters that are driving up infection levels in New York City and other parts of the state, including several Long Island neighborhoods.

Areas with higher positivity rates are ZIP codes centered around Huntington Station, Dix Hills and South Huntington, Valley Stream and North Valley Stream, and Brentwood, officials said Wednesday. In all those areas the infection level was 3%, compared to a statewide average of about 1%.

In New York City, the neighborhoods with the highest percentage of positives according to state data were in Brooklyn, with 8% positives, or 29 cases, around Midwood; 6%, or 13 cases, in Mapleton and Bensonhurst; and 5%, or 12 cases, in Borough Park.

Gov. Andrew M. Cuomo in his news briefing Wednesday read off a list of "hot spot" ZIP codes mostly in the borough of Brooklyn and in the mid-Hudson counties of Rockland and Orange, but said Nassau County "has a couple of communities affected" with higher positivity rates.

He said the top 20 ZIP codes for the recent spread have a COVID-19 positivity rate of 5.5% and "that's about five times the infection rate statewide."

In Rockland County, two ZIP codes have infection levels of 17% and 14%, he said. In all, the 20 hot spot areas account for 23% of COVID-19 cases in the state but have only 6% of the state's population, he said.

Cuomo called on local governments to step up efforts to enforce mask wearing, social distancing and other rules that aim to limit outbreaks.

New York City officials along with Cuomo said this week that some of the hot spots — including some in Rockland and Orange counties — have large Orthodox Jewish populations. Cuomo said he met Wednesday morning with religious leaders in those communities to address compliance concerns, while stressing that anti-coronavirus laws are being applied to people of all faiths.

"The leaders of the community understand and they're going to take action and we're to come up with an action plan," Cuomo said. The leaders "said that they are committed to taking a more aggressive stance."

Part of the plan will be public education to inform people about what he called the "myth" of herd immunity, which has led some to believe that the virus could not spread further because a sufficient number of New Yorkers have been infected. He said scientists contend 50% to 60% of a population need to have antibodies for herd immunity to work, but in New York City the level is only about 18% to 19%.

Rabbi Tuvia Teldon, head of the Orthodox Jewish Chabad movement on Long Island, said he and his group support adhering to mask-wearing and social-distance mandates. He said many Orthodox communities are obeying the mandates but there are some "holdouts."

"The leadership has to take a much stronger position" to ensure compliance among the faithful, Teldon said. The "holdouts" are "very disturbing to me personally."

Dr. Aaron Glatt, the chair of medicine and chief infectious disease expert at Mount Sinai South Nassau Hospital in Oceanside as well as a rabbi at the Young Israel of Woodmere congregation, expressed caution about tying the recent uptick in virus infections to any one community, including Orthodox Jews. He said the public must do a better job at preventive measures like mask wearing to prevent spread.

"There are many communities across the country that have upticks and in many of those places there are no Orthodox Jews," said Glatt. "It's difficult to say this is a problem of Orthodox Jews. … We shouldn't be isolating certain groups."

Guillermo Perez, 66, who runs the born-again Christian ministry Hombres de Palabra, which works with Hispanic men in Huntington Station, Brentwood and across the Island, lamented the short memories of the virus’ devastation that peaked in the spring.

He said "some people think it’s over. Some people, ah, they take it for granted."

He said while the cases "do not represent a cluster or outbreak" the county continues to urge residents follow social distancing and mask-wearing guidelines "to keep their friends, family and neighbors safe."

Christine Geed, a spokeswoman for Nassau County Executive Laura Curran, said those same protective measures "are keys to our success in containing COVID-19." She added that police, fire marshal and health department personnel "will continue to be on the ground to enforce the governor’s mandates to protect the health and well-being of our residents."

The New York City Department of Health said Wednesday there are 10 neighborhoods where cases continue to grow at an alarming rate, and those areas account for over 27.5% of new cases over the last two weeks, despite representing 7.5% of the population.

Cuomo said the state is oversampling in the clusters and has registered a statewide positivity rate of 1.02%, but excluding those areas the infection rate is 0.82%.

To tamp down the virus in those Brooklyn and Queens ZIP codes, the city is deploying 1,000 city personnel — including 400 NYPD cops — to enforce the state mask mandate and issue fines to anyone who refuses to cover his face, de Blasio said.

The New York City Sheriff’s Office has also done 130 inspections of nonpublic schools to check for masking and social distancing.

State Liquor Authority agents and State Police inspected 1,114 establishments on Tuesday, and issued summonses to four — three of them in Nassau County — for violating laws on mask wearing and social distancing aimed at curbing spread of the virus.

Suffolk County Executive Steve Bellone on Wednesday warned of more potential budget cuts if the federal government does not provide more aid to deal with the coronavirus’ fiscal impact on local governments.

Bellone said he would have to cut $20 million to contract agencies that provide health services at a time people are struggling more. Agencies that could face cuts — which include the Long Island Council on Alcoholism and Drug Dependence, the Family Service League, Long Island Against Domestic Violence, the Child Care Council of Suffolk and Long Island Cares — help people struggling with addiction, mental health issues and domestic violence and provide other support services. Bellone said the cuts could undermine the region’s recovery from coronavirus’ social impacts.

"We’re going to see devastating cuts, cuts that should not happen," Bellone said at the Diagnostic, Assessment, and Stabilization Hub, a crisis support center, in Hauppauge.

Bellone has already warned of cuts to the police department, bus service and veterans services without more federal aid. His proposed 2021 budget, which will lay out more potential cuts, is to be released Friday.

East Hills Elementary School in the Roslyn School District closed for cleaning Wednesday, according to a letter from the school’s principal, after one student was reported positive on Tuesday. Contact tracing was underway.

The district issued a letter saying pods associated with the individual were scheduled for virtual instruction on Wednesday, and that sanitation and tracing protocols were in effect.

See what percentage of people around you are fully vaccinatedSee vaccination rates by ZIP code, and more COVID-19 data. List: COVID-19 cases reported in LI schoolsStudents, teachers or staff have tested positive for the coronavirus at schools in dozens of Long Island school districts. Here's a roundup. See which states are on the travel advisory listPlanning a trip? Stay up to date with which states are on the tristate travel advisory. See the latest news on the coronavirus, vaccinesKeep up to date with the latest on the global coronavirus outbreak.