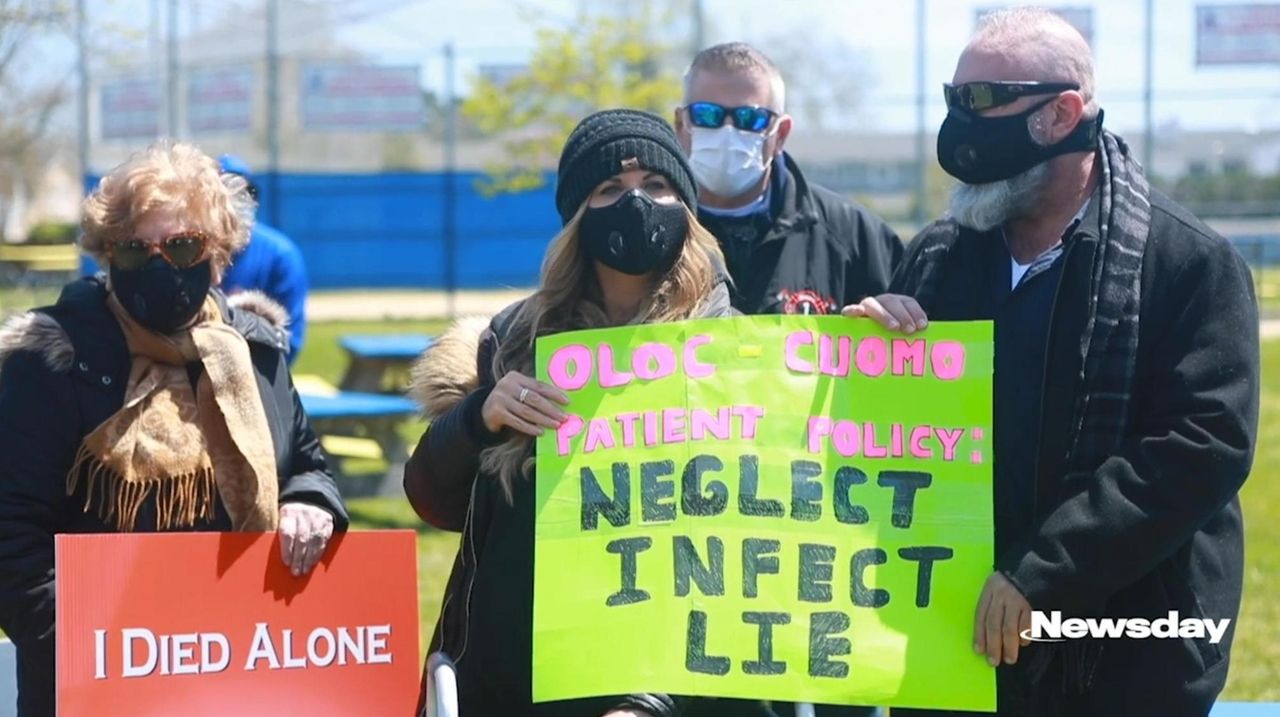 Long Islanders who have lost relatives to coronavirus protested in front of Our Lady of Consolation Nursing & Rehabilitative Care Center in West Islip over their level of treatment for loved ones.  Credit: Newsday / Raychel Brightman

While her friends and neighbors celebrated Mother's Day with family visits and barbecues, Lorry Sullivan spent Sunday protesting outside the West Islip nursing home where her mother died of pneumonia and the coronavirus.

Sullivan was among some two dozen people who rallied outside Our Lady of Consolation Nursing & Rehabilitative Care Center, where at least 39 people have died of COVID-19 and related ailments. That is among the highest number of coronavirus-related deaths at any nursing home on Long Island, according to state data.

Sullivan and others at the demonstration alleged the facility neglected its patients and, when they contracted the virus, left family members in the dark. The protesters demanded an investigation into nursing home deaths and greater transparency and accountability around how such facilities operate.

"My mom came in with an injury to her leg and came out in a body bag," Sullivan said. "This can't happen again."

The New York State Department of Health is investigating how the nursing home has handled the outbreak in the facility, according to a person familiar with the matter, who asked not to be identified.

The protest came amid mounting scrutiny of nursing homes, whose patients have proved among the most vulnerable to the virus. Gov. Andrew M. Cuomo on Sunday announced reforms aimed at protecting nursing home residents from the virus, including mandatory twice-a-week testing of staffers and a prohibition on hospitals discharging COVID-positive patients to such facilities.

Chris Hendriks, a spokeswoman for Catholic Health Services, which runs Our Lady of Consolation, said the facility regularly tests residents, isolates those who are symptomatic and is in "constant" communication with family members.

"It’s very unfortunate that this group would stage a protest on Mother’s Day," she said. "We have staff, nurses and doctors who are mothers, and they have dedicated themselves to providing quality care and ensuring the safety of our residents throughout this pandemic."

Tracey Alvino of West Babylon said the facility did not notify her they suspected her father had coronavirus when he was released in late March. But he did have the virus, and ultimately succumbed to it after infecting Alvino, her mother, brother and boyfriend, she said.

"Had they tested him and treated him, he probably would've been here," she said.

The protesters called for a range of reforms at nursing homes. Vivian Rivera-Zayas of Deer Park, whose mother, Ana Celia Martinez, died at the facility, said they should be required to have full-time doctors and X-ray technicians on staff and to regularly test patients for COVID-19. Sullivan said nursing homes should have to notify family members immediately when their relatives fall ill. Alvino called for greater governmental oversight.