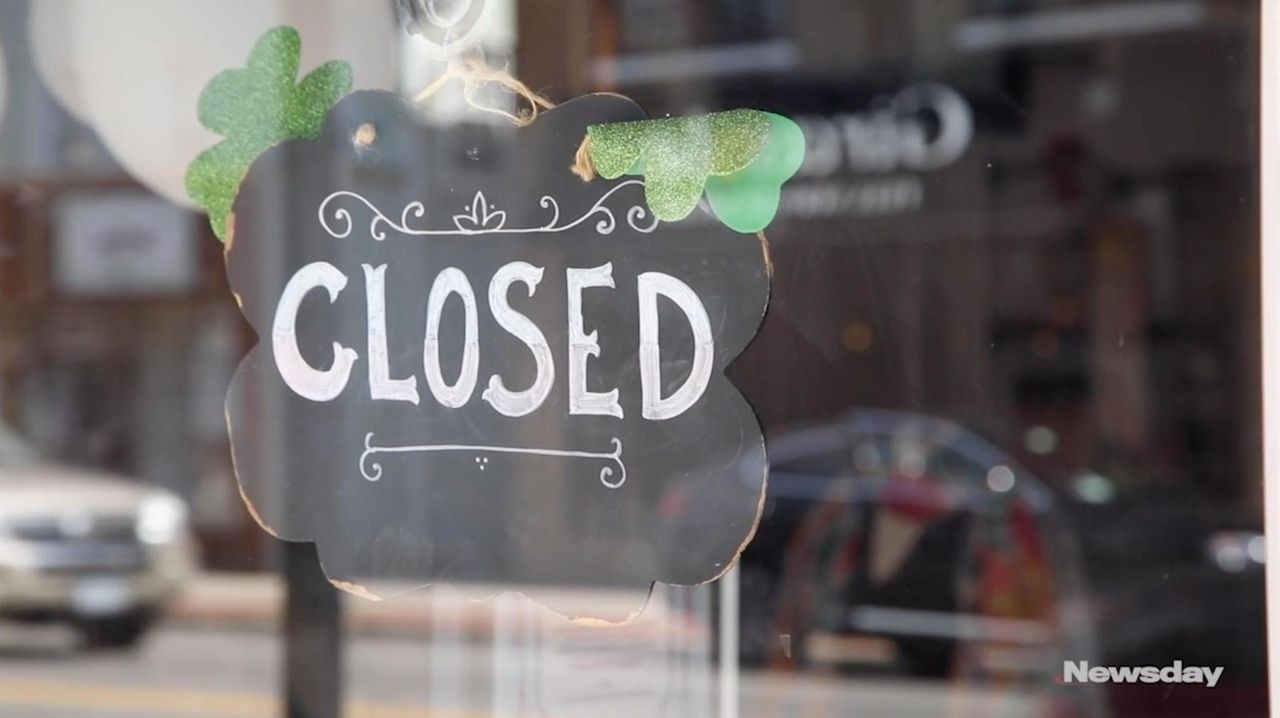 Businesses across Long Island are dealing with the shutdown impacts from the coronavirus pandemic.    Credit: Newsday / Staff

A florist arranged her last flowers to donate to nursing homes and hospitals. An insurance company invested in technology so employees could work from home. A music store encouraged customers to participate in online lessons as it prepared to shut its doors.

Employers and workers Sunday braced for an uncertain new reality as a statewide order closed nonessential businesses to the public at 8 p.m. Sunday, temporarily shutting some workplaces and forcing others to drastically change how they operate.

Meanwhile, other services and workers deemed essential — from those who collect garbage to those who sell beer — continued to soldier on through suddenly empty streets.

Under the "New York State on PAUSE" executive order, announced by Gov. Andrew M. Cuomo on Friday, all nonessential businesses and nonprofits statewide will be closed to the public. There’s no end date, though the executive order expires on April 19, and the governor’s office said it would evaluate then whether it needs to be extended.

The idea is to encourage as many people as possible to stay home to slow the spread of COVID-19, with the goal of preventing the health-care system from becoming overwhelmed.

“We know the most effective way to reduce the spread of this virus is through social distancing and density reduction measures,” Cuomo said when signing the order.

The Riverhead Flower Shop and other florists won't open on Monday under Cuomo's order, according to store owners.

Instead, employees Sunday made bouquets and vases of roses, orchids, lilies and other blooms donated from a supplier, J. Merullo Imports, said owner Peggy Kneski. The arrangements would be delivered to a local nursing home and hospital on Monday.

"Hopefully, we’ll be up and running soon — sooner rather than later," Kneski said. "Brides have postponed weddings until fall. Events are canceled. It’s going to be difficult, but I believe we're going to get through this."

Matthew Daley, owner/agent at Matthew C. Daley Insurance Agency, said he has spent between $2,500 and $3,000 on VPN and other remote equipment so he and his staff of three can work from their homes beginning this week. Still, he anticipates they will resume working in their Miller Place office when the crisis is over.

“People still need to access their insurance if something goes wrong,” he said. “The only difference is you can’t come to my office, but every other line of communication is open.”

Daley is happy to stay open for his policyholders, which include farms, wineries and landscapers. All are facing an uncertain future amid the pandemic.

“I am extremely grateful to quote, unquote 'have' to work,” Daley said. “I feel like I need to be there for my clients.”

He expects business to stay steady for the next six weeks, but the long-term impact on his industry is unclear, he said.

At Sound Beach Music in Miller Place, business at the store had already been down about 75% in the past week, since officials had encouraged social distancing and discouraged large gatherings, owner Brian Chabza said. He has had to lay off five part-time employees until the store reopens.

Still, he is fulfilling and shipping orders and returning calls left with the store. And the shop is still offering online music lessons, where teachers instruct students through FaceTime or Skype.

"We're doing the best we can to salvage the situation and continue with the music education for our students," he said.

But there are also those businesses and employees that are deemed essential.

Administrative employees who can are working from home. About 200 drivers are still picking up commercial and residential garbage.

"Sanitation is a basic essential service," Flower said. "It always has been, always will be."

He said drivers have been given extra personal protective equipment, including latex or nitrile gloves. Transfer stations used by municipalities for their garbage will be open for extended hours if needed — for example, if residential routes take longer with more waste being generated at homes.

Rob Blumenthal, manager of West Beach Beverage in Long Beach, said they've run out of many of the most popular brands of bottled water, and people are stocking up on beer, particularly the high end brands.

"It's bad, but nothing [is] as bad as the toilet-paper issue," Blumenthal said.

Pete Schimmel, senior water plant operator at Bethpage Water District, said workers are still monitoring water operations at the plant to make sure water filtration systems are working and running tests on water quality. The offices are closed to the public and workers are spreading out.

"It’s necessary. I'm not going to say I’m a doctor or a nurse, but we are an essential service," he said. "It has to be done."

Even before the order went into effect on Sunday night, though, he couldn't help but notice the change in the streets.

"The town itself is becoming more of a ghost town," he said. "It’s desolate. It’s a little creepy, no two ways about it."