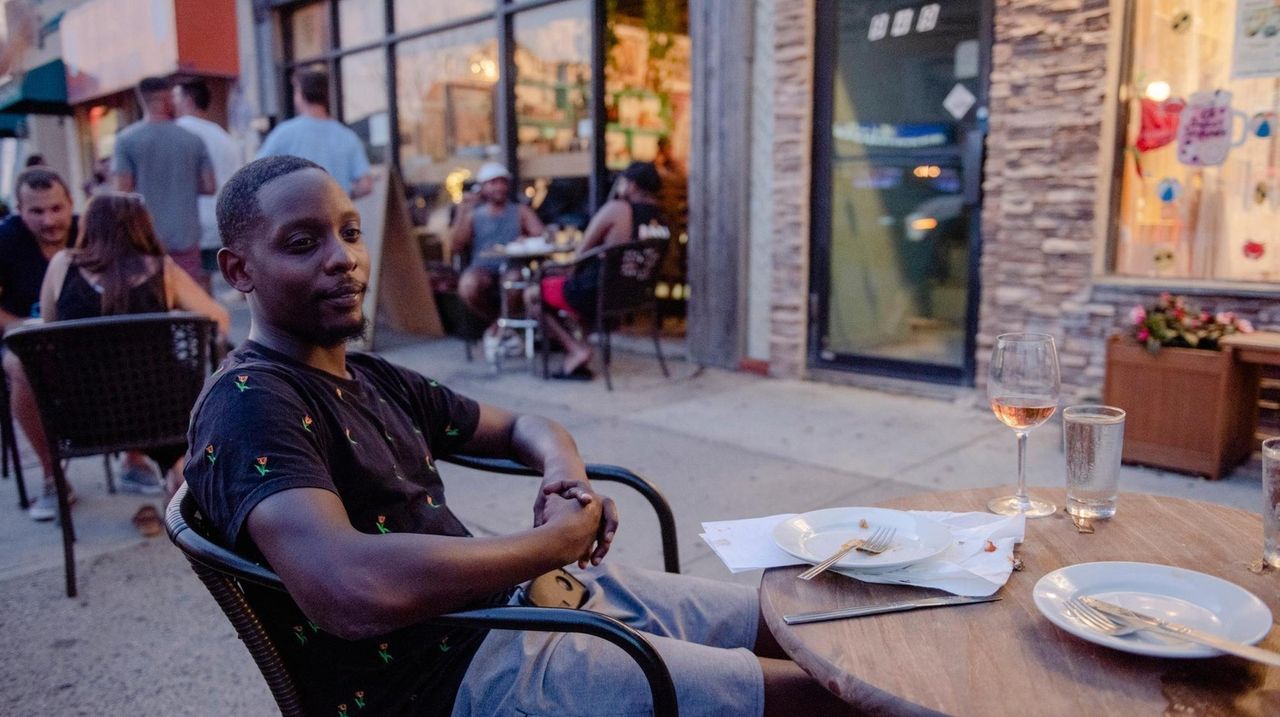 People on Long Island discuss social distancing as officials in several states have blamed a sharp rise in coronavirus cases in part on young people, who have been seen crowding in bars and on streets. Credit: Johnny Milano

Olivia Moriarty said when she was attending classes at the College of Charleston in South Carolina until a month ago, she and other students congregated in bars, with no one wearing masks.

“No one was worried about anything,” she said.

Since she left campus, the number of new cases in South Carolina has been surging, as well as in other southern states and out West, with officials in some states saying young adults are helping drive the increase.

“If I went back to Charleston now, I wouldn’t go [to a bar], because I realize how bad it is,” Moriarty, 20, said as she stood on West Beech Street in Long Beach on Thursday night before going out to dinner, a mask covering her mouth and nose.

Nearly three months after New York’s peak, 40 of 50 states are seeing increases in the number of coronavirus cases, and nationwide, the number of daily new cases Thursday passed 50,000 for the first time.

Alarmed by the spike, Texas on June 26 closed bars, and Florida banned alcohol consumption in bars. Officials in both states said young adults socializing in bars appeared to be a key factor in the spread of the virus.

Nationwide, coronavirus outbreaks have emerged after summer fraternity parties in Mississippi, in college towns in Iowa after bars reopened, and after a Rockland County party where the host and eight others, all in their early 20s, later tested positive.

Officials in Tuscaloosa, Alabama, last week said college students there threw parties at which they invited people who had tested positive for the coronavirus, and a city councilwoman said the aim was to intentionally infect others, with the guest who was newly infected first receiving a cash reward.

Dr. Mundeep Kainth, a pediatric infectious disease specialist at Cohen Children’s Medical Center in New Hyde Park, said “because this is happening in real time, it’s hard to really point fingers” as to whether young people are driving the surging numbers.

Crowded bars are ripe for transmission of the virus, because people often talk loudly — typically increasing how much virus can be expelled — and they’re in confined spaces, with alcohol often clouding judgment, said Dr. Bettina Fries, chief of the infectious disease division at Stony Brook Medicine.

Rahmeloh Hodge, 22, of Long Beach, a University of Buffalo student, said many college students are “careless,” especially when drinking, and don’t think about COVID-19 precautions.

“Most of us are pretty incoherent at times when we’re intoxicated, and you’re not in your right mind,” he said. “You’re not thinking of any of that kind of stuff. You’re not with your parents, so you’re not worried about giving them the coronavirus.”

Hodge, Moriarty and two others were headed to dinner to eat outside at The Cabana, and Hodge said he was “very nervous,” because he knows many young people have not been following social-distancing and mask-wearing guidelines.

Moriarty said that, amid rising case numbers, classmates who are still in South Carolina tell her that people there are now taking the pandemic seriously, and an increasing number of people are wearing masks in public.

But on West Beech Street on Thursday night, Moriarty was among a small minority of people hanging out, walking down the street or waiting for ice cream who were wearing masks.

That puts others at risk, Fries said. Many young people don’t know they have the virus because they have no symptoms or only mild symptoms, so “they are more likely to go around and give it to other people because they’re not symptomatic enough to stay home,” she said.

They then can unwittingly infect people who are more vulnerable to serious illness or death, she said.

That’s why there’s a lag time of weeks between when many young people get infected and when that begins to translate into increased hospitalizations, she said.

In parts of the South, Fries said, “They had broad community spread under the radar screen because these people weren’t showing up in hospitals.” She said states like Florida “are still in the front of the surge,” and the pandemic there will get worse before it gets better.

Even though many young people are asymptomatic, “Nobody’s immune from severe illness or death from COVID-19,” including healthy young people, Kainth said.

At Cohen, which treats patients age 21 and younger, half of those with COVID-19 had no underlying health conditions, she said.

Ira Jones, 34, who grew up in Long Beach and now lives in Brooklyn, and friend Maria Protasova, 28, of Brooklyn, were concerned as they walked down the crowded Long Beach boardwalk on Thursday and few people were wearing a mask. Jones is especially vigilant, because his 56-year-old mother became “very sick” with COVID-19 in April.

“You walk in the bathroom, and there are kids and everything and no one has a mask on?” Jones said as he and Protasova drank wine and munched on sausage at a sidewalk table at Lost & Found restaurant, where tables were spaced to allow for social distancing. “This is the place where everybody should have a mask on.”

Coronavirus on LI: See latest updatesGet live updates from officials, Newsday reporters and more on the coronavirus. Resources to help you navigate life during coronavirus See full coverage on coronavirusKeep up to date with the latest on the global coronavirus outbreak.