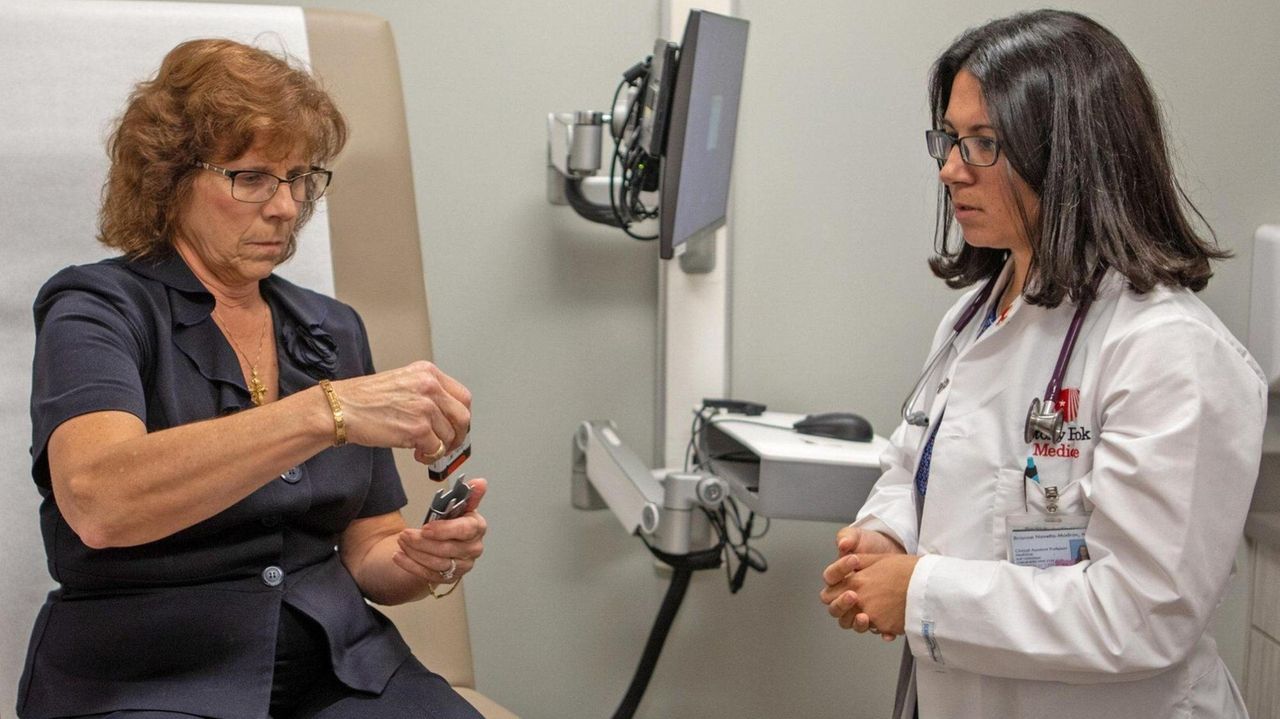 Dorothy Comodore, 65, of Ridge, was bitten by a Lone Star tick and got an allergic reaction to red meat. Here are some preventative measures people can take it they are bitten as well as some symptoms to take note of, as detailed by Brianne Navetta-Modrov, a Stony Brook Medicine allergist, on Tuesday. Credit: Newsday / Shelby Knowles

Dorothy Comodore didn't know a tick had bitten her — until an allergic reaction left the Ridge resident feeling so nauseated and dizzy she passed out and ended up in a hospital emergency room.

The tick that sickened Comodore, 65, can make those afflicted allergic to red meat, and that allergy can last for years or in some cases, for life, according to health experts.

"I was wiped out," she said Tuesday.

The tick, called a Lone Star tick, was initially found in the southeastern United States, but its aggressive nature has made it the dominant tick in Suffolk County, experts say.

The number of people with the meat allergy, called alpha-gal syndrome, is not formally tracked. But doctors have treated hundreds of cases in Suffolk County, said Dr. Brianne Navetta-Modrov, an allergist and immunologist with Stony Brook Advanced Specialty Care in Commack.

Moreover, the doctors worry that the number of cases of alpha-gal syndrome is increasing on Long Island because the number of these bugs is rising. They're most active during the warmer months.

So far this year, the Lone Star represents 80 percent of the ticks identified at the Stony Brook tick lab, Navetta-Modrov said. That represents a significant jump from the 58 percent identified this time last year.

The allergy was first detected on Long Island in 2010 by Dr. Erin McGintee, an allergist and immunologist based in Southampton. She said she's since handled more than 500 cases.

"I see one new case a day this time of year," McGintee said.

Even a small amount of beef, pork or lamb can cause hives, breathing trouble, and a pervasive feeling of heat and itching on the skin. In the worst cases, it can cause a person to go into potentially fatal anaphylactic shock, which can lead to a sudden drop in blood pressure and narrowing airways that can block breathing, doctors say.

The allergy tends to subside after a year or two, McGintee said, but another bite from a Lone Star tick can bring it back.

Not every bite from a Lone Star tick causes the meat allergy, she said. As the news media has focused more attention on the tick-borne allergy, McGintee said she's received numerous calls from people who suspect they've been bitten and are afraid to eat red meat. The allergy does not extend to chicken or fish.

The cause of alpha-gal syndrome can be difficult to trace. The allergy doesn't develop in a person until six months after the tick bite. Comodore, for her part, said she suspects she was bitten last summer during one of her many walks and bike rides through wooded areas, but she didn't have an allergic reaction until November.

Reactions to many food allergens, such as a peanut allergy, typically happen within minutes of exposure. But with alpha-gal syndrome, the symptoms don't appear for three to six hours after eating red meat.

Comodore said she had a second allergic attack late last year before she visited Navetta-Madrov, who used a blood and skin test to diagnose her.

"I was a little upset," Comodore said of the prospect of a diet without meat. "I had been eating hamburgers, spare ribs and meatloaf."

Now she must be on guard with all meals. She carries around two auto-injector epinephrine pens should an attack strike. She checks with chefs and servers at restaurants to ensure there's no trace of meat in her meals.

The Lone Star tick — the female of which has a white spot on its back — is considered widespread in Suffolk County, but is slowly moving west into Nassau, said Dr. Scott Campbell, director of Suffolk County's arthropod-borne disease laboratory in Yaphank.

He said it's important for people to protect themselves from ticks while in wooded areas. It helps to wear pants, long-sleeve shirts and check for ticks afterward, he said.

Every six months, Comodore said, she will visit Navetta-Modrov to test whether her allergy is subsiding. Her latest test results are looking better, and she's hoping the doctor will soon allow her to try just a small piece of meat.

But even that makes her a little worried, considering what happened the last time she ate meat.