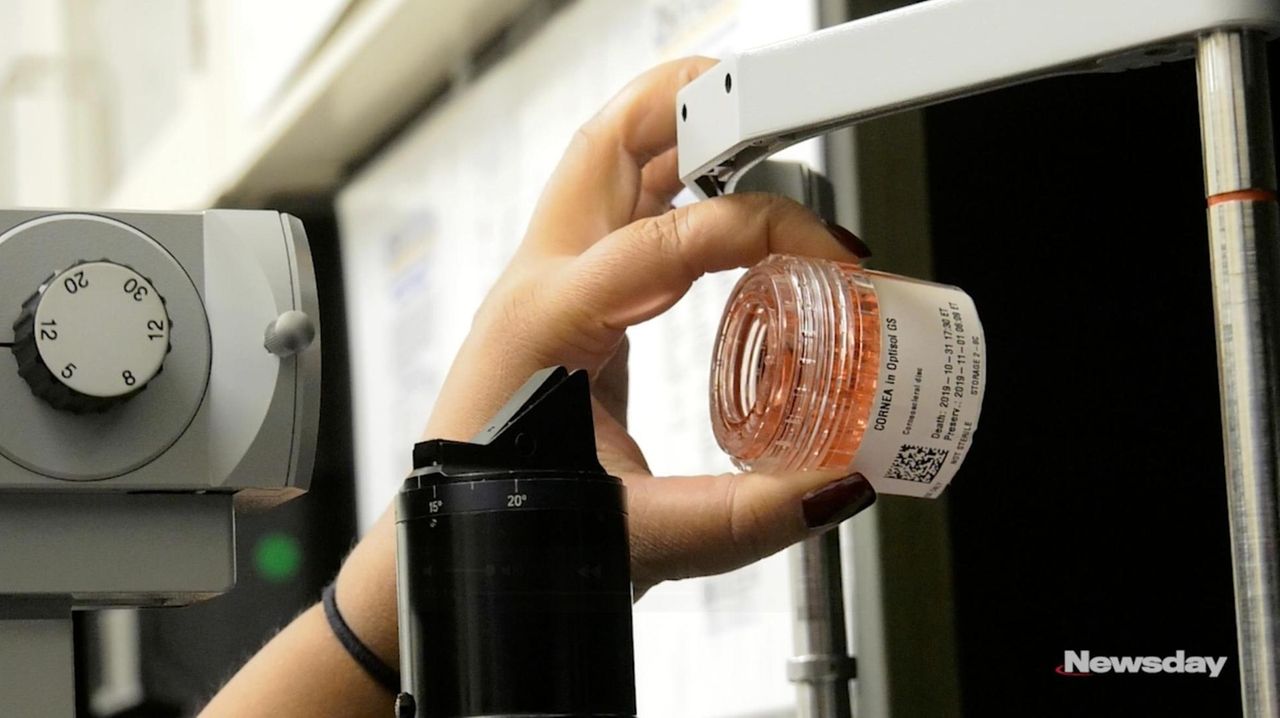 An employee at the Lions Eye Bank for Long Island, Long Island's only eye bank, described on Nov. 5 an experience that changed her perspective on organ donation. Credit: Newsday / John Paraskevas; Kendall Rodriguez

It was a simple credo, but one that guided NYPD officer Marc St. Arromand through his life of public service.

“Marc was a helper,” said his wife, Cecilia Jackson St. Arromand. “He always said, ‘It’s nice to be nice to people. You never know when you are going to need them.’ "

After his death in an off-duty motorcycle accident in April, the Elmont resident, 42, and a 14-year veteran of the NYPD continued to make a difference — as a registered organ donor. Cecilia St. Arromand said she “didn’t think twice” when a nurse approached her about donating her husband's organs, including his corneas.

Marc St. Arromand’s corneas were recovered by technicians with the Lions Eye Bank for Long Island, where the nonprofit either delivered them for transplant surgery to help someone regain their sight or made them available for research. Corneal transplants have a success rate of more than 95%, according to the Eye Bank Association of America.

Organ donation “really kind of creates a legacy for people,” said Kristen Conte, administrative manager at the Eye Bank, which is housed at Long Island Jewish Valley Stream hospital and is the only such facility in Nassau and Suffolk counties.

“I hear so many stories from people who are grateful their loved one was able to donate … it kind of gives life to someone who’s no longer physically here.”

Just the idea of eye donation makes some people uneasy, but it shouldn’t, said Kevin Corcoran, president and CEO of the Eye Bank Association of America. The association, a nonprofit that represents 73 eye banks in the United States as well as others across the globe, said 85,411 corneas were provided for transplant last year.

Corneas, the clear, dome-shaped membrane on the exterior of the eye, control how light is focused into the eye.

“Think of a cornea like the windshield of your eye,” Corcoran said. “When it is diseased, sometimes it’s like seeing through a cobweb, or sometimes you can’t see at all. Light is not passing through to get to your lens and retina properly.”

Corcoran said either an entire cornea can be replaced or just a portion, depending on the nature of the disease.

Handling the corneas is a delicate job. After Lions Eye Bank for Long Island technicians recover the corneas, they are stored in an antimicrobial solution, refrigerated and later brought to the bank’s lab facilities.

“We go through a rigorous evaluation process looking at the tissue itself and looking at the donor’s medical history,” Conte said. “Once we determine that we're able to transplant that person's tissue, we have our Lions volunteers that come here to pick up the tissue and deliver it to the surgery center.”

The service organization plays a key role by providing volunteer drivers and funds for equipment and other needs in conjunction with Northwell Health.

In some ways, corneas are the ultimate universal donor. They can be stored up to 14 days, no blood match is needed between donor and recipient, and there's no age limit on older donors. However, many eye banks restrict recoveries from donors over age 75, Corcoran said.

“We do try to match donor to recipient by about 10 years,” he added. “The recipient will most likely have that cornea for the rest of his or her life.”

Getting people to sign up to be organ donors continues to be a challenge in New York, despite recent efforts to streamline the process. For example, people who get their driver’s license renewed can check a box to join the registry, as can 16- and 17-year olds who obtain learner’s permits.

Still, only 35% of New York State residents are registered organ donors, while the national average hovers around 58%.

Tatiana Rodriguez of Rockville Centre understands their reluctance. Even though she works as an administrative support associate at the Lion’s Eye Bank, Rodriguez hesitated about donating her father’s organs after his sudden death from a heart attack in September 2018.

Then she was told — to her surprise — that 69-year-old Jose M. Rodriguez was a registered organ donor.

“My father came here from the Dominican Republic in 1972, so he must have signed up then,” she said. “No one had any idea … that was weird and out of the box for him.”

Rodriguez said she was unable to discuss the issue with her grieving mother. Learning that her dad had registered cleared the way for Tatiana to sign off on his wishes.

“When I found out he was an organ donor, it just changed everything, the air was different,” Rodriguez said. “His legacy had a purpose.”

Cecilia Jackson St. Arromand said she would encourage people to consider organ donation, even if a decision has to be made during a difficult time.

“Even if you are having a hard time with something, you can still help someone else,” she added, through tears.

Knowing his corneas and other organs went to help others makes the 31-year-old widow feel like her husband is still present.

“I’d give anything to have him look at me again,” she said.

Easing restrictions may make it harder to persuade LIers to get shots
NY virus positivity continuing to decline amid push to return to normalcy
Long Island teens who won vaccine scholarship welcome the boost
Poll: Many Americans resuming pre-virus activities
LI leisure sector led 1% monthly job gains in May
1:49
Not all are ready to drop safety measures despite NY reopening
Didn’t find what you were looking for?