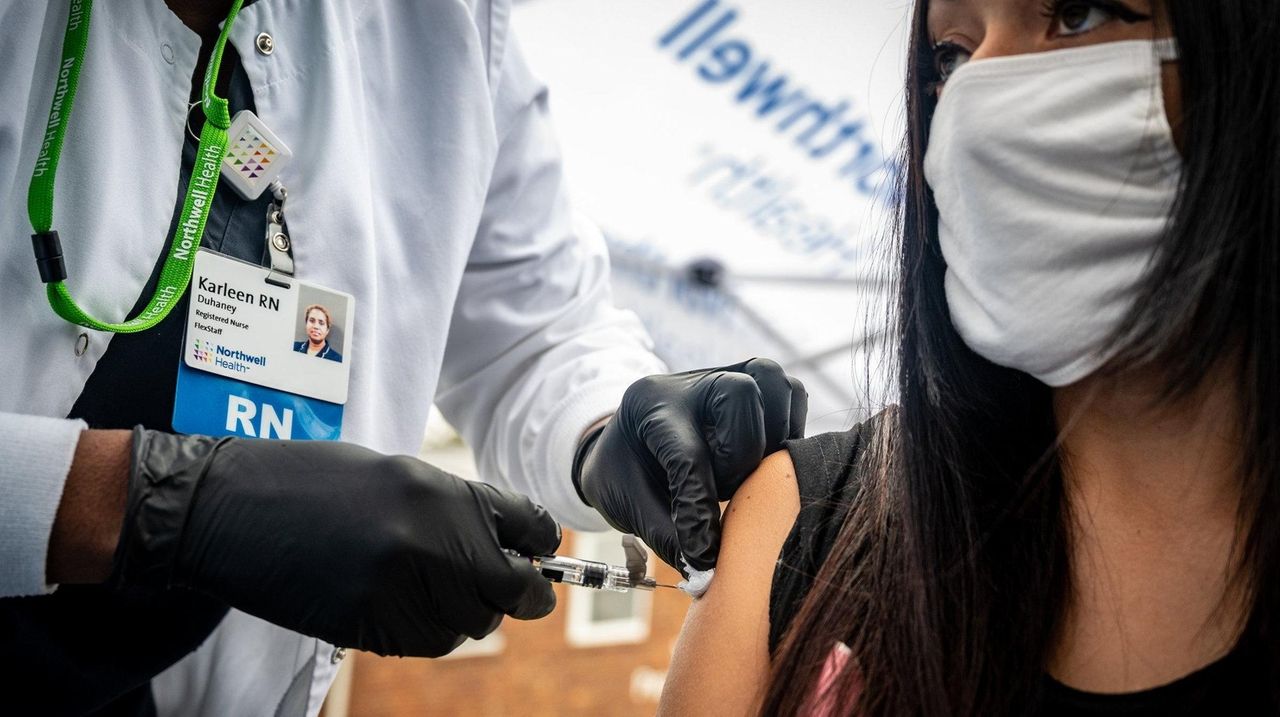 Flu season is underway, and there's an aggressive push across Long Island by government officials and health care systems to boost the number of people who get the vaccine. Hear from several people who got a shot at a flu clinic at the Valley Stream Presbyterian Church on Thursday. Credit: Newsday / J.Conrad Williams Jr.

Staving off a devastating "twindemic" of flu and COVID-19 starts with the simple task of getting a flu shot, health experts say.

That's why there's an aggressive push across Long Island by government officials and health care systems to boost the number of people who get the vaccine. More than 1 million New Yorkers have gotten the shot so far this flu season, according to state data.

"We have to remind everyone that there are 20,000 to 40,000 deaths from the flu every year" across the United States, said Dr. Mark Jarrett, chief quality control officer and deputy chief medical officer at Northwell Health. "If those deaths are preventable with the flu vaccine, we certainly want to do that and take the burden off all the health care systems and the hospitals, so they are not caring for a lot of very sick flu patients while at the same time being stressed with lots of patients with COVID-19."

Flu season officially starts in October, and activity across New York and the U.S. remains low, according to the U.S. Centers for Disease Control and Prevention and the state Department of Health.

Health experts said there are some hopeful signs the flu season will be moderate.

The southern hemisphere had a modest influenza season, said Dr. William Schaffner, medical director of the National Foundation for Infectious Diseases, which is based in Bethesda, Maryland.

"Sometimes that’s a little bit of a prediction of what could happen here," he said.

At the same time, Schaffner noted, a large number of people in that hemisphere received their flu shots, wore masks and socially distanced in an effort to ward off COVID-19.

"Here in the United States, we have two populations — the careful people and the carefree people," he said, referring to people who have not followed guidelines to wear face coverings and keep 6 feet apart. "There are enough carefree people so that now in a majority of states, we are seeing an increase in COVID. Those are places that are not going to do well with flu, either."

Schaffner said there is no problem with the inventory of flu vaccine other than "spot shortages," when people look to get the shot at a particular pharmacy or site.

"More is coming all the time," he said.

Every year, doctors handle questions from patients who are skeptical about the flu vaccine. Pharmaceutical companies craft annual vaccines based on several factors, including flu strains from the previous year.

There were some concerns last year when the vaccine proved more effective against the A strain of flu than the B strain, which surged midseason.

It’s still essential to get the vaccine, even if it’s not a perfect match, Nassau County Health Commissioner Lawrence Eisenstein said.

"This is a topic I find, as an infectious disease expert, very frustrating," Eisenstein said recently during a Stony Brook Medicine webinar on the flu that included Suffolk County Health Commissioner Dr. Gregson Pigott.

"Let’s say, in a bad year, there is only a 50 percent match," Eisenstein said. "If you can protect 50 percent of the population of the United States from a deadly virus, that’s not a bad thing to begin with. If we had a COVID vaccine to protect half the population, we would be excited as a start to have that."

Pigott agreed that everyone over the age of six months should get a flu shot. People who are vaccinated and get the flu have milder symptoms and are less likely to end up in the hospital.

"It is definitely more effective than nothing at all," he said.

Many more vaccinations to go

Early statistics show more than 1.3 million New Yorkers received their flu shots between Aug. 1 and Oct. 19, according to the New York State Health Department. That number, however, does not include all adults and vaccinations given in the five boroughs of New York City during that time period, officials said. It’s still a drop in the bucket for a state of almost 20 million people.

Medical experts are searching for more ways to bring flu shots and education to the community.

Stony Brook Medicine is partnering with libraries in Suffolk County on free webinars about the flu vaccine, as well as flu clinics.

"We consider it to be an education issue," said Dr. Cordia Beverley, assistant dean for community health policy at the Renaissance School of Medicine at Stony Brook University. "We have to convince the population that this is important."

Nassau County’s "Fight the Flu" campaign includes several free drive-thru flu clinics, such as one that was at the Valley Stream Presbyterian Church on Thursday.

"I don’t want to get sick," said Mary Hansen Sterger, 68, of Valley Stream, after receiving a flu shot at the site. "I feel like I am a vital member of my family. I work out. I keep healthy, and this is part of it."

Getting your flu shot

Looking for a flu shot? Here are some resources with information and locations:

See the percentage of LIers who are fully vaccinatedCheck the latest numbers on how coronavirus has spread in your community. List: COVID-19 cases reported in LI schoolsStudents, teachers or staff have tested positive for the coronavirus at schools in dozens of Long Island school districts. Here's a roundup. See which states are on the travel advisory listPlanning a trip? Stay up to date with which states are on the tristate travel advisory.

1:47
Differences in key COVID-19 statistics tracked to how agencies record them
A third Pfizer shot? It's 'likely,' says CEO
34:06
COVID-19 continues to spread as people socialize more
1:35
For LI's vulnerable homeless population, a place to get vaccinated
Polls: Staffing, COVID precautions are hurdles to firms' growth
Should kids get a shot? Long Island parents differ on COVID-19 vaccine
Didn’t find what you were looking for?