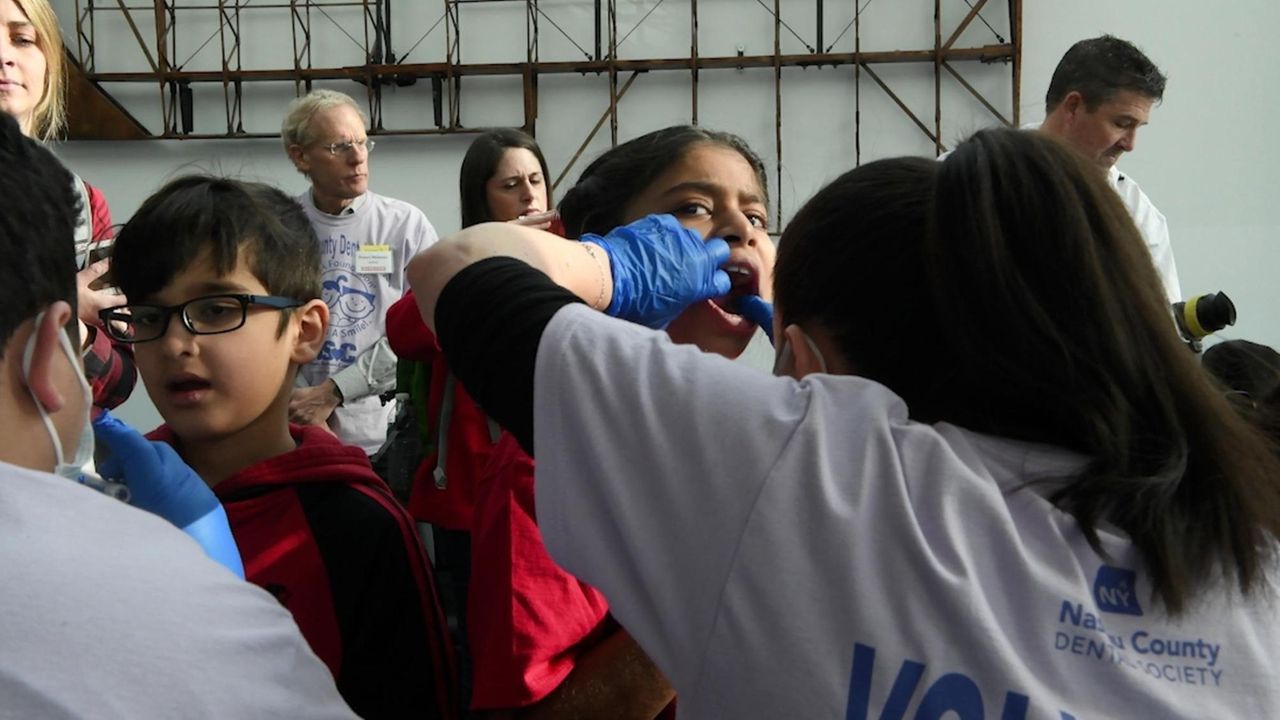 Volunteer dentists on Friday offered free oral examinations for children ages 4 to 7 from preselected Nassau schools, many from low-income families, during a "Give Kids a Smile" event organized by the Nassau County Dental Society at the Cradle of Aviation Museum in Garden City.  Credit: Newsday / Alejandra Villa Loarca

Volunteer dentists and dental residents performed oral screenings on more than 1,200 Nassau County children Friday in an event targeted at a sliver of the millions of kids nationwide who lack dental insurance or who have coverage but rarely — if ever — visit the dentist.

The cost of private insurance, transportation problems and parents not viewing dental care as a priority are keeping kids out of dentist offices, leading to oral diseases that could be prevented at an early age, experts say.

“They’ll make sure their kid goes to the pediatrician and gets vaccinated and all that, but going to the dentist is something that is not seen as all that critical until there’s a problem,” said Dr. Amr Moursi, chairman of New York University’s pediatric dentistry department.

The event was among more than 1,500 “Give Kids a Smile” free dental-screening programs nationwide scheduled this year, most in early February, according to the Chicago-based American Dental Association Foundation, which spearheads the initiative. Another event is Saturday in Riverhead.

The Garden City event, hosted by the Nassau County Dental Society at the Cradle of Aviation Museum, was aimed at children aged 4 to 8 from Nassau schools with a large number of children from low-income families.

Many of those children are covered by Medicaid or the state and federally funded Child Health Plus, which offers free or subsidized dental and health insurance for children from moderate-income families with earnings above the Medicaid ceiling.

Yet only 60 percent of children — defined as ages 2 to 20 — in Medicaid or Child Health Plus in New York visited the dentist at least once in 2017, according to the state Department of Health.

Many parents of those children don’t have cars, which is why buses took kids directly from their schools to Friday’s event, said Dr. Joseph Brofsky, section head of pediatric dentistry at Cohen Children's Medical Center in New Hyde Park and co-chair of the Nassau event.

Even if parents have transportation, many — especially those in low-wage jobs — have little flexibility in their schedules and no paid vacation days, said Anthony Santella, an associate professor of public health at Hofstra University. Many dentists do not accept Medicaid or Child Health Plus patients, and few dentists have offices in low-income neighborhoods, he said.

Another barrier to treatment is that families with private insurance may face large copays or deductibles, Santella said. Employer-based dental coverage is usually separate from medical coverage, and many parents forgo it for themselves and their kids, he said.

The number of children with dental insurance has been rising in recent years, partly because of the 2010 Affordable Care Act, which offered subsidized dental insurance for parents who made too much money to qualify for other government programs, and which expanded Medicaid, Moursi said.

Many children without insurance are from families who earn too much to qualify for government programs and who don’t have employers who offer dental benefits “and cannot afford or choose not to purchase commercial dental insurance,” Moursi said.

Parents with coverage often don’t know their children should begin dental care at age 1, he said.

Ethan Turcios, 8, of Inwood, who was at Friday’s event, got his first dental checkup at age 3. Henry Turcios, his dad, said he and his wife didn’t think it made sense to bring him earlier because “they don’t really have all their teeth” until they’re about 3.

That’s often too late to combat tooth decay that can cause problems into adulthood, said Dr. Jeannine Weiss, a dentist from Roslyn Heights who heads the pediatric dental program at Jamaica Hospital Medical Center in Queens.

Virna Cespedes, 40, of Inwood, said she first brought her son Logan, 8, to the dentist when he was 1, after reading online that experts recommend it. Cespedes said the advice surprised her.

A study released in October 2018 by the Chicago-based American Academy of Pediatric Dentistry found that 74 percent of parents do not take their children to the dentist by age 1.

Weiss said that, even though babies typically only have four to six teeth at age 1, tooth decay can occur then, and, left untreated, can spread to other teeth and cause cavities in adult teeth developing underneath the gums.

Dr. Binod Verma, a Manhasset Hills dentist practicing in Rego Park, Queens, said healthy teeth stimulate the jaw bones, and if teeth are lost prematurely, that could lead to problems in chewing properly.

It’s much cheaper for kids to have regular checkups than to undergo treatment for oral diseases, Moursi said.

“Dental decay is the No. 1 chronic disease in children,” he said. “It’s five times more common than asthma. It’s endemic . . . I think parents don’t give it the kind of serious consideration it deserves.”