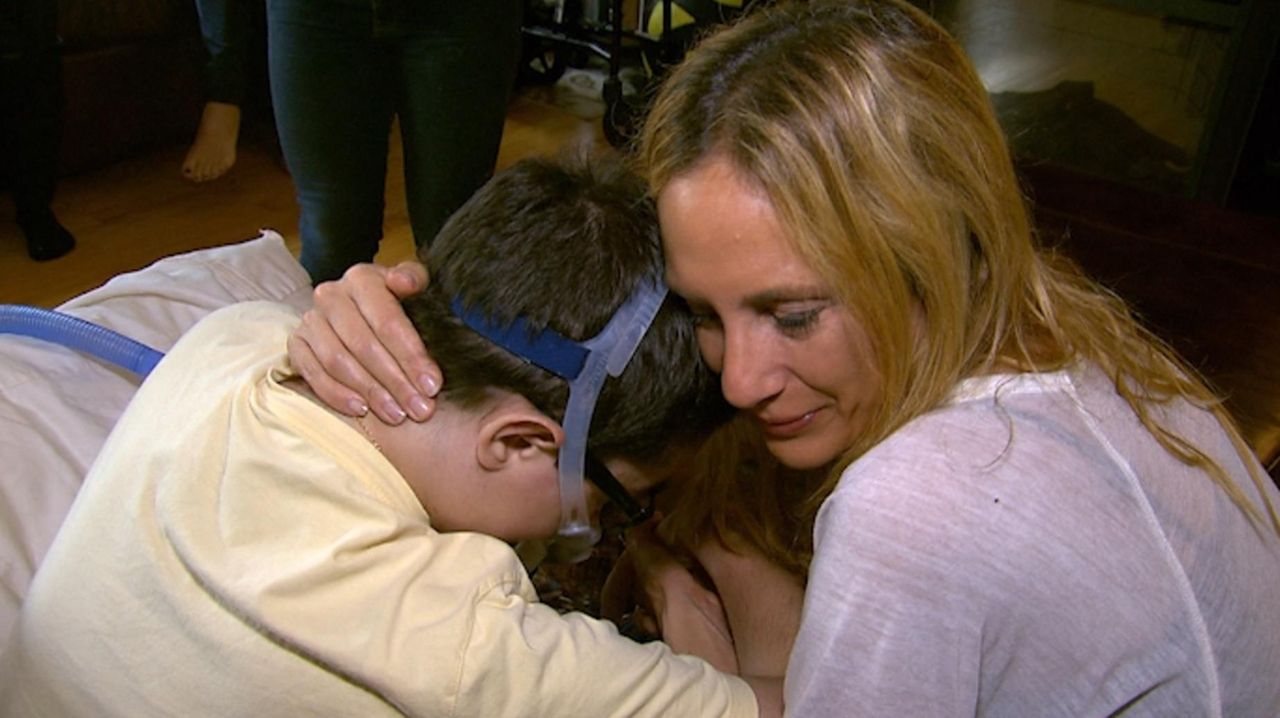 On Wednesday, May 31, 2017, Debbie Vigliotti of Glen Cove dicussed the experience of caring for her son, Nicolas Vigliotti, 20, who has a rare lung condition. After several rejections from hospitals, the mother learned that a Houston, Texas doctor may be willing to take on Nicolas' case.  Credit: News 12 Long Island

A young man with an extremely rare genetic disorder is hopeful this week after a doctor agreed to evaluate whether he is a candidate for a double-lung transplant.

Nicolas Vigliotti, 20, was born with chromosome-14 deletion, a rare genetic disorder that affects his thyroid, brain and lungs. Doctors say he could die if he doesn’t receive a lung transplant soon but, because his disorder is so uncommon and doctors are unsure if he’s strong enough to undergo the surgery, he has been turned down by donor centers three times, his mother said.

Earlier this month, Debbie Vigliotti of Glen Cove, posted an emotional video to Facebook pleading for someone to take on her son’s case and it worked. She said she was contacted by a doctor in Houston last week who agreed to evaluate Nicolas for a transplant.

Though they don’t know what the doctor will determine, the Vigliottis are hopeful.

“We were so overwhelmed. For so long, we felt left out,” Debbie Vigliotti said. “It feels promising.”

It’s been an uphill struggle for Vigliotti since day one, his mother said. When he was born, he had trouble breathing and doctors didn’t expect him to live through the day, she said.

At 18 months old, Vigliotti was diagnosed with chromosome-14 deletion.

Wendy Chung, a professor at Columbia University and a medical geneticist who has treated Vigliotti since 2005, said his condition “could be something seen in 1-in-a-million or 1-in-20-million.”

Because of the disorder, Vigliotti’s lungs did not develop normally and have gotten worse, according to Chung.

Nicolas lived a “relatively normal life” for a time, though he would see the doctor monthly for tests and checkups and he has needed a feeding tube since he was about 2 years old, Debbie Viglotti said. Around age 8, his lung function declined drastically, his mother said, and since then he’s had to be on oxygen at all times.

Two years ago, Vigliotti suffered a major setback when a cold put him in the hospital and damaged his lungs to the point where he now needs to be hooked to a ventilator. In January, he went back to the hospital with the flu and was there for three months.

“He’s now beyond the point where medicine can help his lungs,” Chung said. “He needs someone else’s lungs to breathe for him.”

On Wednesday, when an oxygen monitor on his finger showed his levels dropping dangerously, his mother vigorously whacked his back to clear some of the mucus that had built up in his lungs. It’s something she does three or four times a day, Debbie Vigliotti said.

“It’s like this everyday,” said Debbie Vigliotti, a single mother who has another son, age 19. “One minute he’s fine and the next minute he’s not breathing so great.”

It’s been hard adjusting to his “new normal,” Nicolas said, but the prospect of a lung transplant has him hopeful.

“I’m just shocked that a doctor out there, somewhere might be able to help me,” he said. “I definitely have high hopes.”