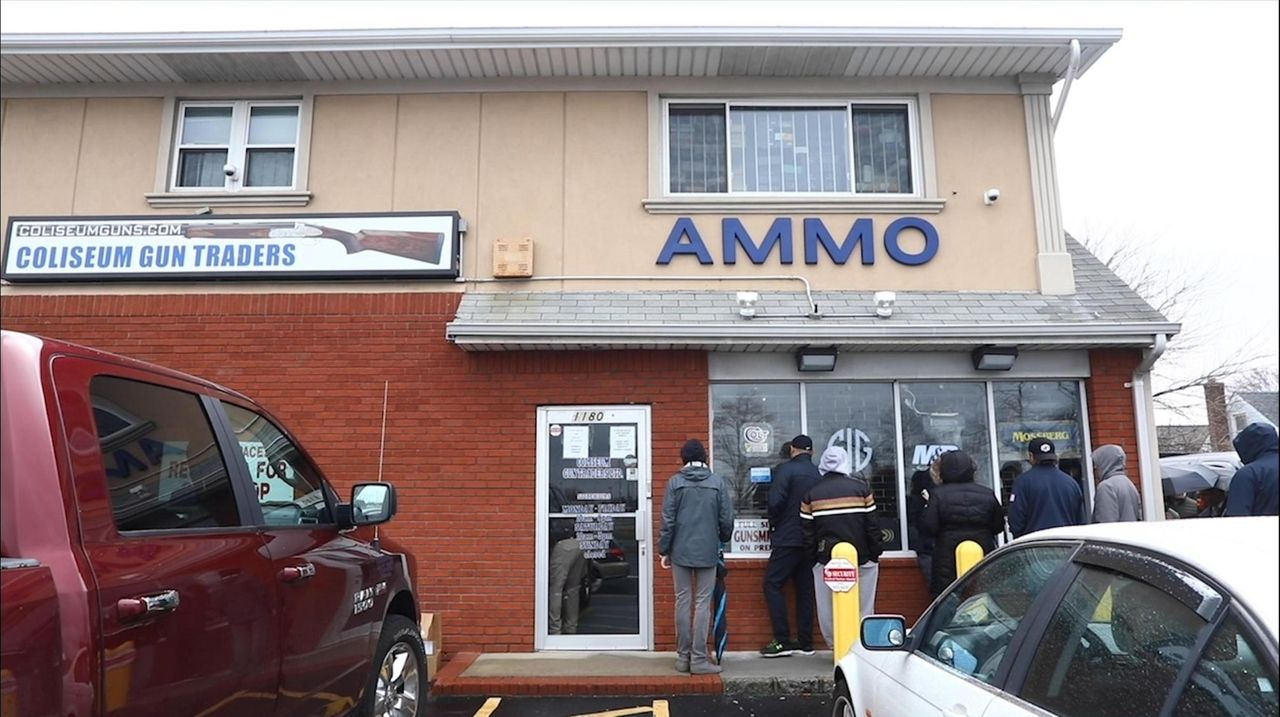 Some Long Islanders are on the hunt for more than just hand sanitizer and masks in the face of the potentially deadly coronavirus.

Gun store owners on Long Island say their businesses have sold out of firearms over the past week as scores of customers have inundated retailers.

Buyers, they said, are fearful of possible lawlessness as the pandemic escalates in the region. Already four people have died of the virus on Long Island, and there are more than 300 confirmed cases.

Elected officials and law enforcement urged calm in the face of the rush on firearms, with police officials saying crime across Long Island has decreased as social distancing guidelines against the virus have emptied public places.

"We got you; that’s our job," said Nassau County Police Commissioner Patrick Ryder. "Let the professionals do what we do. The right to purchase a firearm is your Second Amendment right, but to purchase a gun because you're afraid of lawlessness or looting … our cops have you covered."

Most of the purchases since the COVID-19 scare have been for rifles and other long guns, which can be purchased after an in-store FBI background check, store owners said. Purchases of handguns require an initial lengthy permitting process.

Nassau police on Monday suspended the issuance of new pistol permits in an attempt to avoid the necessary person-to-person contact due to the virus. But the department is still processing renewals for current pistol permit holders.

Ryder said police have seen a decrease in crime in the past week as precautions taken to stem the rise of coronavirus transmission have kept more people indoors.

"There’s no need to be concerned," Ryder said in a phone interview. "Crime has actually started to decline a little bit because people are home. It’s Saturday afternoon every day now."

Ryder said he expected the downward crime trend to continue, as schools have closed and bars and restaurants across the region have shuttered or are offering takeout only.

Nevertheless, Danny Coronado, a loan officer from Rockville Centre, stood in a line 30-deep at the Uniondale shop Tuesday afternoon, looking to stock up on ammunition for his two guns: an AR-15 semi-automatic rifle and a 12-gauge shotgun.

"I guess I've seen one too many movies and I want a little bit of peace of mind in case stuff hits the fan," Coronado said. "I want to feel safe that no one's going to climb in through my window and give me an unnecessary visit. So, protection, basically."

The majority of recent buyers have been first-time gun purchasers concerned about protecting themselves and their families if the economy continues to worsen and fuels a growing sense of desperation, the store owners said.

"Most of these guns will go into a closet and never be used," said Cliff Pfleger, owner of the Long Island Gun Source in Medford.

Pfleger said thousands of customers have passed through his store in the last week — a level that hasn't been seen since the days after 9/11. He's already sold out of some popular, lower-priced rifles, but expects to be restocked in the next few days. None of the gun retailers would give exact figures on the number of guns sold.

"We've seen an unprecedented amount of business," Pfleger said. "I think this level of business is going to continue until there’s an all clear. We had a tremendous amount of inventory but now the store is just decimated. It looks like Swiss cheese at the moment."

Suffolk County Executive Steve Bellone, speaking on a conference call with reporters, said: "My message would be for people to relax and not to panic. I understand this is an unprecedented situation. … People should understand that every day, agencies that are charged with protecting health and public safety are working."

Suffolk Chief of Department Stuart Cameron, also speaking on a conference call, said he saw a similar increase in guns sales on Long Island after the 2012 Sandy Hook school shooting in Connecticut.

Cameron added that violent crime was down across the county.

"I want to assure everyone that the Suffolk County Police Department is well prepared to protect them throughout out this crisis," Cameron said.

Coronado, who had already waited about 45 minutes and was still not close to getting inside the store, said many other patrons are still concerned.

"I think everyone just feels the same thing I feel, you know, worried," Coronado said. "Hopefully it's just unnecessary worry, like with toilet paper."

A letter from the publisherThe health and safety of our Newsday family — our subscribers, single copy readers, advertisers and of course, our employees — is of paramount importance to us here at Newsday. PSEG implements coronavirus emergency response planNew protocols include a team to respond to homes of potentially infected customers and closure of walk-in service centers. What you need to know about changes in your townThe coronavirus pandemic has caused closings and changes to meetings, events and policies in towns, cities and libraries around Long Island. Official: Closing LI, NYC schools 'is the right thing to do'County officials said they also weighed the burden closing schools would put on parents to find childcare, and for students in need who rely on schools for breakfasts and lunches.

New data reassuring for COVID-19 vaccination in pregnancy
1:22
Doctors worried about hesitancy after 'pause' is lifted on vaccine
U.S. jobless claims fall to 547,000, another pandemic low
Bill mandates COVID safety rules; workers would oversee compliance
J&J vaccine 'pause' latest messaging challenge for officials
1:30
'Just show up': Starting Friday, 60 and older will walk in for COVID vaccine
Didn’t find what you were looking for?