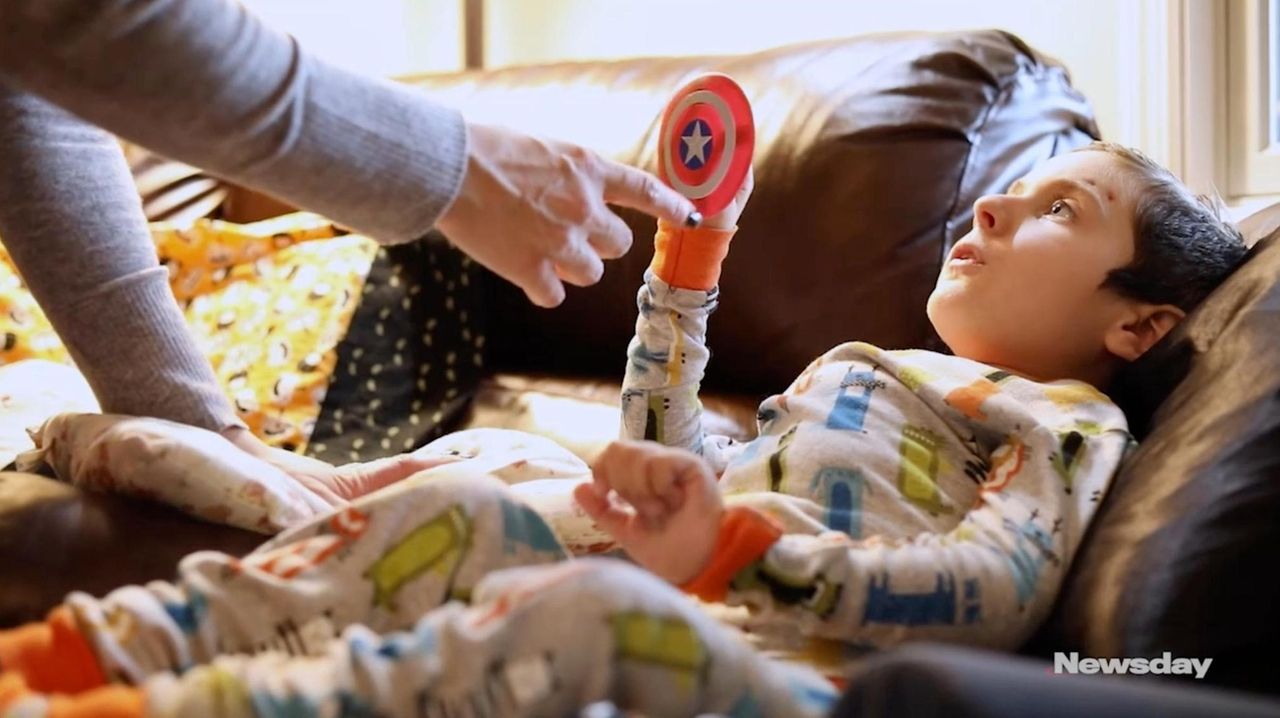 ToniAnn Accardi and her sons Tyler and Nicholas trick-or-treat at their home in Centereach due to Tyler's recent surgery to help treat his spinal muscular atrophy. Tyler and his older brother, who also has spinal muscular atrophy, can't go out trick or treating because catching so much as a common cold could kill the boys. And their family was too overwhelmed to plan any Halloween activities. Credit: Newsday / Morgan Campbell

The night before Halloween, 7-year-old Tyler Accardi returned to his Centereach home after eight screws had been removed from his head to treat complications from a rare genetic disorder during a nearly two-month Manhattan hospital stay.

Tyler and his older brother, who also has spinal muscular atrophy, can’t go out trick or treating because catching so much as a common cold could kill the boys. And their family was too overwhelmed to plan any Halloween activities.

So when local volunteers heard about the brothers’ plight, they decided to bring the trick or treating to the boys.

“Did I win the lottery?” a smiling Nicholas Accardi, 8, yelled several times as the two brothers marveled at the collection of characters cramming into their living room.

Tyler, who just went through spinal surgery for severe scoliosis a week ago, later said, “I was really surprised and really happy that they came.”

The “reverse trick or treating” was organized by several groups, including The Angels of Long Island, a Patchogue-based nonprofit that assists people in need. Suffolk County police officers also helped out.

The family “has been through a really hard time,” said Debbie Loesch, head of the Angels group. “Courageous is an understatement.”

The boys’ mother, ToniAnn Accardi, said the visit by the volunteers was “overwhelming.”

“All of us wanted him to be home for Halloween, so this could not have come at a better time,” she said. “He deserves this.”

The boys’ disorder affects muscular movement throughout their bodies, confining them to wheelchairs. But their minds are sharp, and they attend regular classes in the local public elementary school, Tyler in 2nd grade and Nicholas in 3rd.

The disease is progressive and life expectancy is not certain, but physical and occupational therapy are critical for them to get well into adulthood, their parents said.

They have gone through numerous surgeries; the most recent involved trying to straighten Tyler’s badly curved spine using a halo gravity traction procedure.

Doctors at New York Presbyterian Morgan Stanley Children’s Hospital put the screws in Tyler’s head and mounted a metal “halo” around them that was then attached to wires and pulleys used to stretch his spine.

Every day doctors added a few more pounds to the system to stretch and straighten his spine some more, his mother said. Tyler had to remain in a “hanging” position 23 hours a day, for six weeks.

“It seemed like such a barbaric concept, and it took a lot to adjust to seeing my 7-year-old with eight screws in his head and then two days later hanging weights on him,” his mother said.

At the end of that process doctors inserted two metal rods and 12 screws to help keep the spine straight. The surgery was delayed for days because Tyler’s airways became dangerously blocked with mucus and he ended up in the intensive care unit at one point. He also was in ICU at Stony Brook University Hospital in July because of a collapsed lung.

During the time Tyler and his mother spent in the hospital in Manhattan, Nicholas and his father, also named Nicholas, would travel there on Fridays and stay until late Sunday.

The father had to cut back on his work as an environmental sales rep along with his moonlighting job in real estate to watch Nicholas since the mom was not home. Bills piled up.

But on Thursday, the family was grateful for a brief respite. “This is amazing, and it’s really nice people do stuff like this,” ToniAnn said.

Of her sons, she said, “You never get used to what they go through, that never gets easy. We just keep giving them hope.”