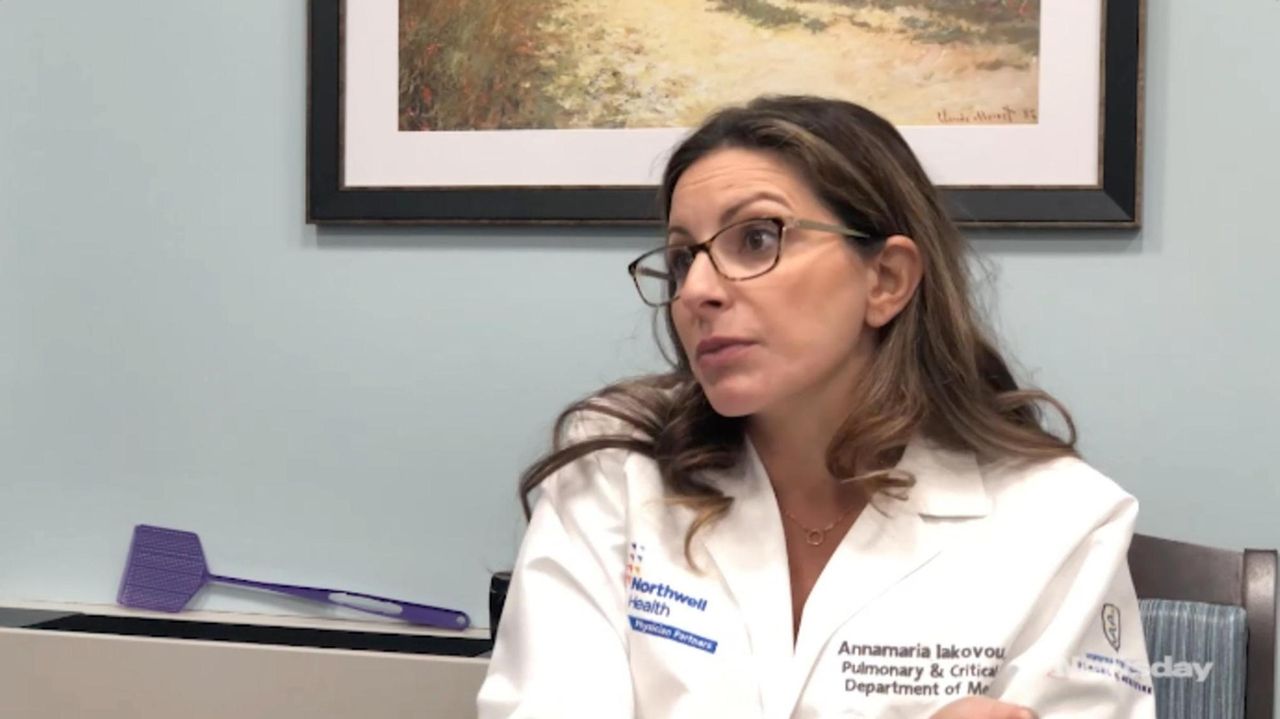 A surging number of lung illnesses and deaths associated with e-cigarettes, and scientists’ scramble to find out what's causing them, illustrate how much is still unknown about the health risks of vaping. Credit: Johnny Milano

The surging number of lung illnesses and deaths associated with e-cigarettes — even as scientists scramble to find what is causing them — illustrate how much is unknown about the health risks of vaping.

Health experts say what they do know is worrisome: Vaping can harm the brain development of young people, chemicals in some vape products are linked to respiratory diseases, and e-cigarettes may be creating a new generation of nicotine addicts after decades of decreasing adolescent tobacco-smoking rates.

Those same experts warn that it’s too soon to say whether vaping can lead to cancer or other chronic diseases, although some doctors say there are reasons to suggest it does. Health officials say ingredients in some vape liquids are known to cause cancer.

And that’s just for legal vape products. Vapers — and health officials — don’t know what potentially dangerous substances are in some of the illegal vape pods that contain THC, the chemical in marijuana that causes a high. Most of the people with vaping-related lung illnesses whose e-cigarette history is known vaped THC, or THC and nicotine.

“Vaping is not safe," said Dr. Panagis Galiatsatos, an assistant professor of pulmonary and critical care medicine at Johns Hopkins University in Baltimore. "It poses an absolute risk to every user."

Nationally, there have been 1,299 cases of acute lung illness associated with vaping as of Oct. 8, and 29 deaths as of Oct. 10, including a 17-year-old from the Bronx, according to the U.S. Centers for Disease Control and Prevention and state health departments.

Jon Doneson, 52, of Roslyn Heights, said he feared he would be added to the list of vaping fatalities. He spent five days at North Shore University Hospital in August for treatment of severe breathing problems after vaping THC daily for about three months. He said he has no idea what besides THC was in the vape cartridges he bought.

“It’s like playing Russian roulette,” he said. “You might buy 20 cartridges in a row that are good product" that don’t cause acute illness "and then five that are not good.”

Ingredients such as glycerin or vitamin E acetate are added to vape cartridges to convert THC or nicotine into a liquid that produces an aerosol when heated, and chemicals usually are added for flavoring. State health officials said they are investigating whether vitamin E acetate, which was found in high levels in most of the samples of New York lung-injury patients who vaped THC, is one cause of the New York illnesses.

Some of the vape ingredients are common food flavorings.

However, Dr. Annamaria Iakovou, a pulmonologist at North Shore, said, “There are things that are OK for consumption, for skin application, hair application, but are not OK to inhale. They just create a different reaction in the airways.”

The food flavoring diacetyl, for example, is commonly found in vape liquids and is linked to pulmonary disease, Galiatsatos said.

Another potential danger of vaping is that, when the liquid is heated, metals from the coils in e-cigarettes can be released into the aerosol, said Dr. Mina Makaryus, a pulmonologist at Northwell Health. And the very high temperature needed to heat the liquid could cause heat-related lung injuries, he said.

There likely are multiple causes of the lung injuries, because the types of illnesses that vapers have vary, Makaryus said. What lung injury cases have in common is that inflammation in the millions of air sacs in the patients' lungs make it more difficult for oxygen to transfer to red blood cells, causing difficulty in breathing, Iakovou said.

With the causes of the acute illnesses still unknown, “I think it’s very risky to be engaging in vaping,” said Dr. Maxwell Smith, a researcher with the Mayo Clinic in Scottsdale, Arizona, and co-author of a report published in the New England Journal of Medicine on Oct. 2 that found vaping-related lung damage in patients similar to that seen after exposure to mustard gas in chemical warfare.

Most vape liquids contain flavorings. Yet critics said those flavorings — such as cotton candy and strawberry-watermelon bubble gum — are designed to lure young people to vaping, an allegation vape-product companies deny. Enforcement of a New York State ban on flavored e-cigarettes was set to begin Oct. 4 but was blocked Oct. 3 by a temporary restraining order issued by a state appeals court, which sent a lawsuit filed by the Washington, D.C.-based Vapor Technology Association back to a Supreme Court judge in Albany County. That judge will decide whether to grant the association's request for a temporary injunction against the ban.

Vape companies said their products are intended only for people trying to quit tobacco smoking.

Moreover, studies show that kids who use e-cigarettes are much more likely to become tobacco smokers than kids who don’t vape, said Dr. Rachel Boykan, an associate professor of clinical pediatrics at the Renaissance School of Medicine at Stony Brook University.

“Nicotine is very damaging to the adolescent brain, which hasn’t finished maturing until age 24 or 25,” she said.

Nicotine can cause anxiety in young people, and it can impair learning and shorten attention spans, she said. THC has similar effects on the developing brain, she said.

Kathee Burke-Gonzalez of East Hampton, who has a 19-year-old daughter and 21-year-old son, was “horrified” when she was doing research on vaping a few months ago and read that it can affect brain development.

“It’s hard to believe that a decision a 15-year-old is making could affect them for the rest of their lives,” said Burke-Gonzalez, an East Hampton town board member who invited seven teenagers to address board members Oct. 1 about the dangers and prevalence of vaping.

Lisa Vidal, sales manager of Infinite Solutions, a Bohemia-based vape-product distributor, agrees that vaping is not for kids or even for adults who have never smoked tobacco. But Vidal said she and other ex-smokers who had tried multiple times to quit smoking with nicotine patches, lozenges and inhalers only were able to stop smoking by using vape products. The state flavor ban, as well as flavor bans in effect or proposed by other states and the federal government, will push some vapers back to smoking combustible cigarettes, she predicted.

Yet experts said it is not certain that vaping is less dangerous than smoking. The National Institute on Drug Abuse said “research so far suggests that e-cigarettes are less harmful than cigarettes” but adds that more studies are needed. The type of acute lung illnesses seen in vapers has not been seen in smokers.

The CDC recommends that ex-smokers who vape should not return to cigarette smoking. That’s because although it’s still unknown which health problems vaping can cause, “We do have knowns about smoking,” such as cancer, heart disease and emphysema, Makaryus said.

Decades may be needed to gauge how much of a risk vaping is for cancer and other chronic diseases, Galiatsatos said.

E-cigarettes have only been on the market for just over a decade. Yet it can take a few decades for people to develop cancer and heart disease from smoking tobacco, Galiatsatos said. The link between smoking traditional combustible cigarettes and cancer was not proven in a laboratory, but through epidemiological studies that followed people who smoked and didn’t smoke until their deaths, he said.

Galiatsatos said that although it’s not yet possible to establish a clear link between vaping and chronic diseases like cancer and heart disease, “There are a lot of biological, plausible reasons to suggest that you will have chronic problems if you use this substance.”

Number of people who have had serious lung diseases associated with vaping:

Schumer, on LI, calls for flavored e-cig sale banFlavored e-cigarettes have been linked to at least 22 deaths across the country. Massapequa teen sues vape-maker Juul, citing addiction Shawn Hochhauser argues the company hooked him on flavored e-cigarettes through deceptive advertising. Nassau panel gives OK to ban flavored e-cigarettesThe bill states the products can only be sold if they are flavorless or tobacco, mint, or menthol-flavored. Survey: Most parents believe vaping is addictiveA South Nassau Communities Hospital survey finds 58 percent of parents think vaping is as bad as alcohol and marijuana.

How will homebound patients get the COVID-19 vaccine?
1:26 State sees decreasing virus positivity, but LI yields higher rate
4:01 COVID-19: From 799 deaths in one day to vaccine being 'passport' back to normalcy
Senate nears relief bill votes after half-day GOP delay
2:15 Johnson & Johnson vaccine has arrived on Long Island
What you need to know about COVID-19 vaccine development
Didn’t find what you were looking for?