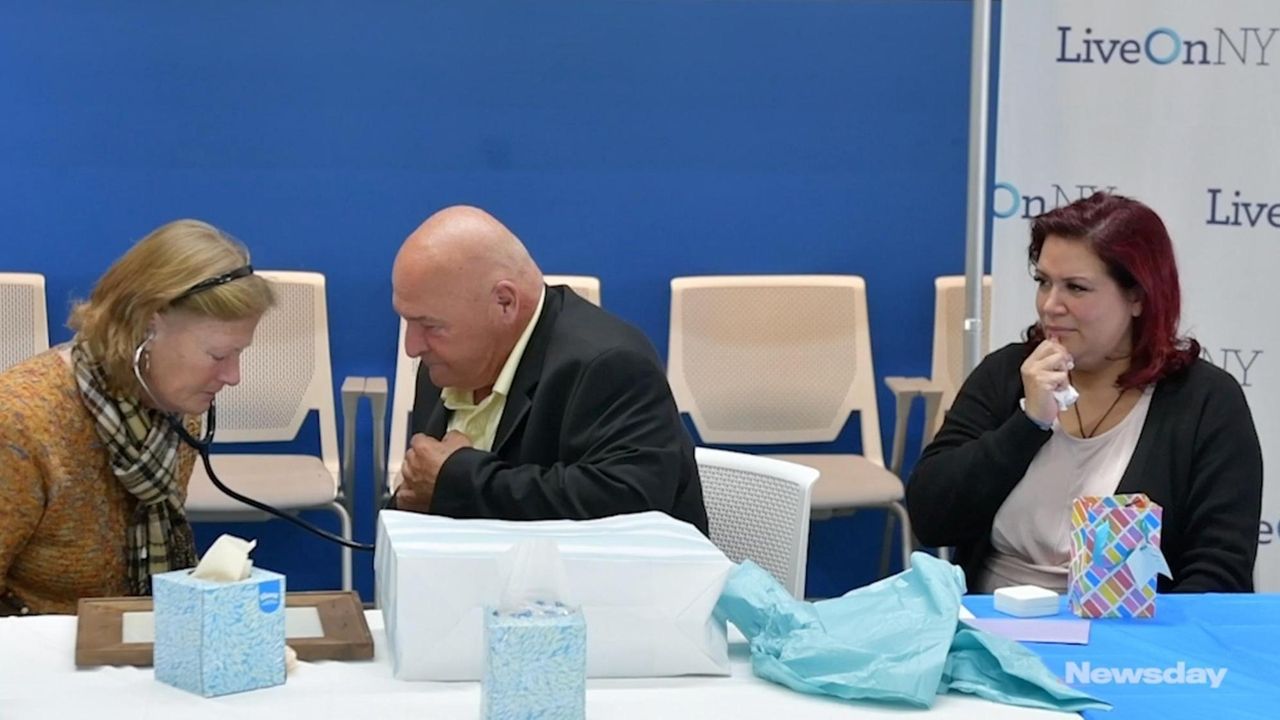 The wife and family of a Long Island man who donated his heart to a retired police officer, met with the donor recipient for the first time on Monday, in Manhattan at the LiveOnNY office.  Credit: Howard Simmons; Photo Credit: Courtesy of Erickson Family

The mother and widow of Mount Sinai's John Edwin Erickson, stethoscopes to their ears, listened with awe Monday to his life-giving legacy — his heart, beating strongly in the chest of a retired police officer from Connecticut.

In a meeting filled with expressions of love and gratitude, Erickson's family for the first time met Robert Pascarelli, 66, of Norwalk, who had waited seven months for a donor and the chance of a new lease on life.

Pascarelli said he immediately spotted Megan Erickson, whose world was shattered two-and-a-half years ago when her 34-year-old husband, a construction worker, was hit by a car as he crossed Route 110 in Melville. The couple had been married for less than four years.

“I just knew she was the wife — right away, as if he was telling me she is the one,’’ he said.

“John was the love of my life,’’ said Megan Erickson, 34, of Howard Beach, Queens, who burst into tears as the two embraced. “You have the same blue eyes."

“You are beautiful,’’ Pascarelli said as he wiped the tears from her face, adding tenderly, “I want to thank you."

The two families met at the Manhattan office of LiveOnNY Foundation, which matches organ donors with patients whose lives hang in the balance. Nearly 9,000 people in the metropolitan area, which includes Long Island, New York City and five counties north of the city, currently are waiting for donated organs, according to the nonprofit organization.

The families exchanged gifts and photos as Pascarelli leafed through a photo album memorializing the life of youthful, brawny John Erickson, a sandhog laborer who had worked the city's underground subway tunnels. “We are a perfect match,’’ he said.

Robert Pascarelli gave Megan Erickson a gold necklace with a pendant — two hearts, entwined — and a picture of a recent electrocardiogram of Erickson’s heart. On the back was inscribed: “Our Heart Lives On. Thank You from the Pascarelli Family.’’

Donna Erickson, 58, of Mastic, John's mother, was given the first honor to hear her son’s heart. “Not a skip — strong as ever,’’ she said, with her hands placed on Robert Pascarelli's chest.

An organ donor herself, Megan Erickson had encouraged her husband to sign up for the program when the two were updating their driver’s licenses with their new addresses.

“John was very sweet, with a very, very good heart. So when I asked him to become an organ donor, it was a no-brainer for him," she said. "He said, ‘Of course. I will do it.’ ’’

“I was on my way to meet him. I was about 20 minutes away,’’ she said. At the hospital, it was determined that John Erickson was brain dead; doctors kept his bodily systems functioning when they saw he was an organ donor.

“It was very quick. We were grieving, but I knew that this was time-sensitive and we needed to act fast,’’ she said. In addition to the heart, Erickson's liver, kidneys and skin were donated.

“If there is anything I have that will be of use after I am gone, let them have it," Hollenbach said. "It just makes sense to give the gift of life."