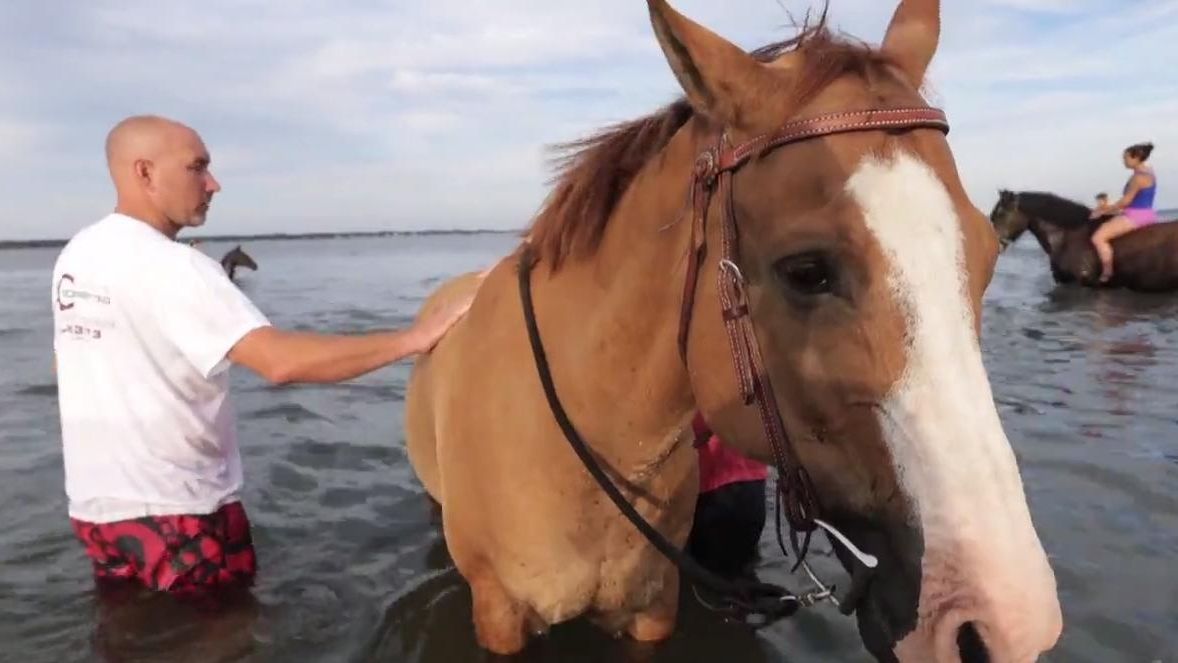 Residents in Southold routinely go to Cedar Beach to relax and ride their horses in the water. Videojournalist: Randee Daddona (Aug. 9, 2013)

An online petition campaign is underway to keep afloat Southold's Pony Swim, where locals and others frolic in the waters off Cedar Beach in summertime with their horses.

The gatherings began three years ago to give horses some cool, wet relief from the hot weather and quickly became an unofficial tradition from June until September. But Southold officials said the swims violate town code and raise health concerns. A complaint led to a halt to the gatherings after a park ranger was dispatched to the beach on Aug. 20.

"My ranger told me there were 40 horses there," Suffolk County Parks Commissioner Greg Dawson said. "It's a violation of code. Horseback riding is allowed in a lot of places, but we don't permit horses in the water."

Samantha Perry, 48, the petition organizer and a Southold resident, said she has so far collected 2,147 signatures to continue the swims via a petition on change.org.

Horseback riding at Cedar Beach Residents in Southold routinely go to Cedar Beach to relax and ride their horses in the water. Videojournalist: Randee Daddona (Aug. 9, 2013)

"It's just a whole different experience, instead of riding your horse in a field," said Perry, who took part in the Pony Swim with her Appaloosa, Rebel. "Horses like to get cool in the water like anybody else."

She added that other riders include teachers, nurses, trainers and others who come from Riverhead, Middle Island, Rocky Point, Manorville, Miller Place, Farmingville and Patchogue.

Dawson said the ranger politely warned the offenders that the beach was not a designated horseback riding facility and that Pony Swim participants have been compliant.

Though Dawson acknowledged in a recent telephone interview that officials had no idea the county beach was being used by horses, he's not the only official raising concerns about the situation.

"Horseback riding and swimming don't go together," Southold Supervisor Scott Russell said. "They're not compatible exercises. No one wants their children swimming with horses next to them. Horses have to go to the bathroom like anybody else."

Suffolk Legis. Sarah Anker, a Democrat whose district includes Ridge, Middle Island and Wading River, where she said some of the riders also come from, has also been dragged into the troubled waters.

"Some of my constituents contacted my office [about supporting the swim], and my biggest concern is related to the interaction of having horses and swimmers in the water at the same time," Anker said.

Pony Swim participant Laura Henagan, 44, of Ridge, said that hardly anyone uses Cedar Beach, so she doesn't see what all the fuss is about.

"Some people use it to go kayaking -- but there are no lifeguards -- it's not a swimming beach," said Henagan, who has a Tennessee Walker named Patches. "We went one day a week in the evening when we weren't bothering anybody."

Dawson said water quality monitoring is expected to be conducted to test the waters and he will review the matter.