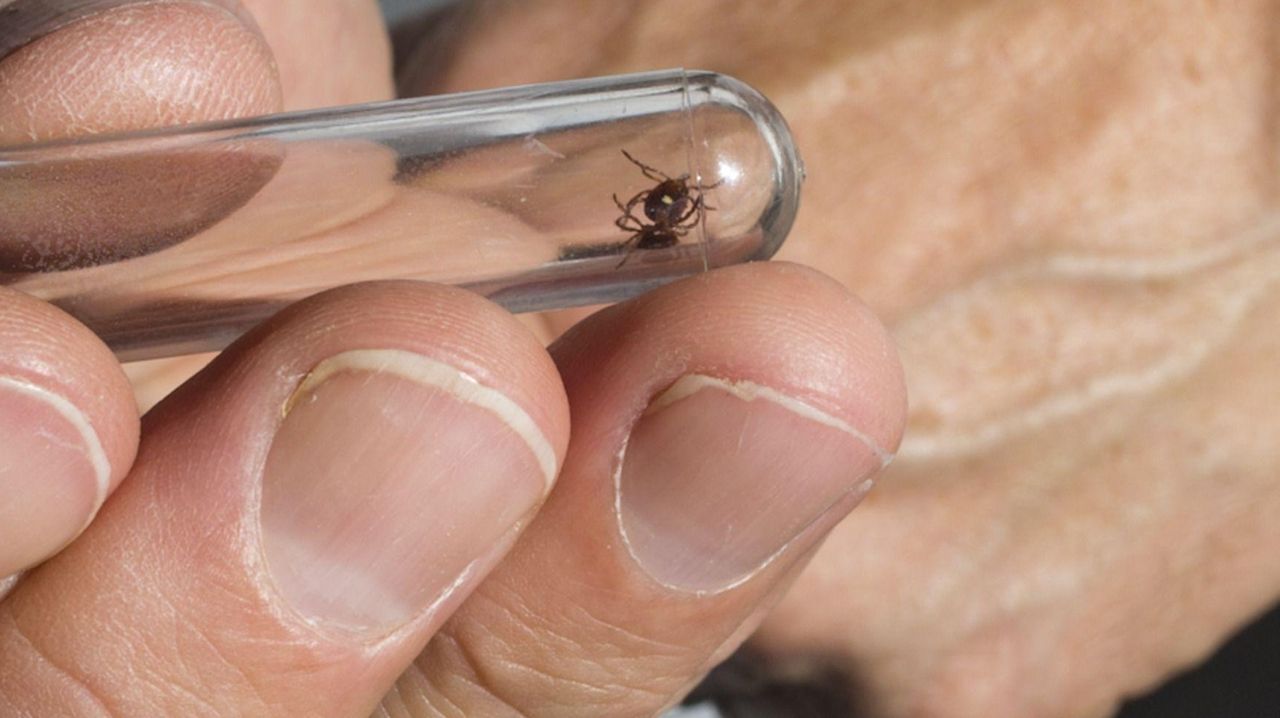 A relatively large cluster of people allergic to red meat has emerged on the East End while scattered cases have cropped up elsewhere on Long Island, according to leading medical experts, who attribute the condition to bites from the Lone Star tick. Credit: Newsday

Hundreds of people on the East End have become allergic to red meat in recent years after being bitten by the Lone Star tick, with scattered cases cropping up elsewhere across Long Island, medical experts say.

The condition — called alpha-gal allergy — has transformed some people who have eaten red meat for decades into patients under doctors’ orders to abstain from all meat from mammals, including beef, pork, lamb, goat, rabbit and venison. Patients are subject to hives, rapid heart palpitations, pervasive itching and, in the worst and rarest of cases, life-threatening anaphylactic shock.

Alpha-gal allergy is relatively new to medicine, first described in 2009 by a physician-scientist at the University of North Carolina. It has morphed into a global public health concern, with Long Island as one of the disorder’s leading focal points. At the same time, the region is seeing an explosion in the population of the Lone Star tick, a transplant from the Deep South.

“I have been treating people with this allergy since 2010,” said Dr. Erin McGintee, an allergist in Southampton who was the first physician to identify the condition on the Island and now has nearly 400 patients with the allergy.

“My youngest patient is 3 years old and I have patients in their 80s and 90s,” she said. “I see patients of all ages, and they are evenly distributed between males and females.”

As with people who are allergic to peanuts, epinephrine is the prescribed treatment, usually through an auto-injector such as an EpiPen.

The allergy occurs because the blood-sucking bug produces a sugar that humans do not possess — galactose-alpha-1,3-galactose, or in short, alpha-gal, McGintee said.

Ticks, well-known as carriers of microbes, have a slurry of compounds in their saliva, including anesthetic chemicals that blunt their bite.

In the case of Lone Star ticks, the alpha-gal compound is injected directly into the host’s bloodstream, where the body perceives the sugar as foreign and produces armies of antibodies to fight it.

The same sugar also occurs in mammalian meats. Normally, people digest alpha-gal from meat sources. But once antibodies have been produced because of a tick bite, the potent warrior forces of the immune system are activated whenever the sugar is present.

For those who eat red meat, even the smallest meatball or a soup laced with beef stock can unleash an outsized immune system reaction. Ingestion of chicken and fish, which are not mammalian, does not cause an immune response after tick bites, McGintee said.

In Montauk, Heather D’Agostino, 48, had no idea her formidable symptoms in October 2015 were related to the filet mignon she ate at a restaurant.

“I woke up in the middle of the night. The palms of my hands and soles of my feet were unbelievably itchy,” D’Agostino said. “Then, I realized my throat was swelling and that I was having an acute anaphylactic reaction.”

D’Agostino scrambled to find something — anything — to ease her worsening symptoms. She had a pediatric over-the-counter medication on hand. “I drank two child doses of Benadryl, two shots, and that worked.”

She doesn’t know when she was bitten by ticks. Now, she encourages friends and acquaintances on the East End to carry the antihistamine with them at all times — just in case.

The East End may well be Long Island’s alpha-gal epicenter. McGintee said residents often encounter Lone Stars, so named because of the prominent white spot on the adult female’s back. Males do not have that distinguishing feature.

The ticks bite even while in the larval stage, McGintee said. At that point of the bug’s development, its bite is virtually imperceptible.

“I don’t want there to be mass hysteria about this,” the allergist said, “but I think that people should know that this is a food allergy, it’s not an illness.”

The allergy wanes over time, McGintee said, but a new Lone Star tick bite can cause symptoms to rebound.

Still, the condition has forced some people into emergency rooms. Almost all patients who have been diagnosed carry an auto-injector, in the event they inadvertently encounter a meal with traces of red meat.

“When I go to friends’ houses I always carry an EpiPen,” said Gregory Baum, 17, who lives in the North Haven area of Sag Harbor. He suffered a serious reaction to red meat last year when he visited his sister in Philadelphia.

“I like going there because of the [Philly] cheesesteak sandwiches,” Baum said.

But hours after a meal, he awoke sick and nauseated, breaking out in hives. His mom got an over-the-counter antihistamine, and eventually the aggressive symptoms subsided.

Baum, who was diagnosed with alpha-gal, said he doesn’t remember being bitten, though he was in plenty of tick-rich locations. An avid golfer, he often has driven balls into the high fescue grass alongside the course he frequents. Baum said he is well aware of ticks and other creepy crawlers in the grass.

Dr. Scott Campbell, chief of the Arthropod-borne Disease Laboratory in Yaphank, a division of the Suffolk County Department of Health, said the Lone Star tick, while not native to Long Island, probably has been here since the 1970s. The bug feeds voraciously on deer and began expanding its range in the 1990s, he said.

“The most plausible theory is that this tick was brought in by migrating birds, and the East End is well-known for its bird diversity,” Campbell said.

Over time, the Lone Star, which also can transmit the bacterium that causes the infectious disease ehrlichiosis, has become established on the East End and is making its way west.

“This tick is not shy,” Campbell said, noting that early-stage ticks bite to get mammalian blood in order to grow. Among adults, only the Lone Star female bites to get blood that aids egg maturation. Adult males attach but have no interest in bloodmeals, he said.

McGintee’s caseload of alpha-gal patients is the second-largest outside the South, the Lone Star’s original habitat.

She works closely with Dr. Scott Commins of the University of North Carolina School of Medicine, who has more than 600 patients, the largest number worldwide. Commins, an associate professor of medicine and pediatrics, was the first to draw a link between tick bites and the red meat allergy.

“My understanding had been that this was more of a Gulf Coast, Bible Belt, Southern state tick,” Commins said. “But it has expanded its range and they are now finding it in Minnesota, Indiana and of course Long Island.”

Alpha-gal allergy is being reported elsewhere in the world, he said, although the condition in other countries appears to be caused by different types of ticks.

The allergy is a dramatic departure from other food intolerances, Commins said.

With allergies to peanuts or eggs, the immune system’s response is triggered by a reaction to proteins and is immediate. For those with alpha-gal allergy, Commins said, the trigger is a complex sugar and the adverse response can take hours, long after the meal has been consumed. Fat in the meat probably slows the reaction time, he said.

“It’s a massive departure from everything we have known about food allergies,” Commins said. “Not only do you start with the idea that a sugar can lead to a systemic allergic reaction, such as anaphylaxis, but an adult who has eaten beef, pork or lamb for 40, 50, 60 years can suddenly become allergic.”