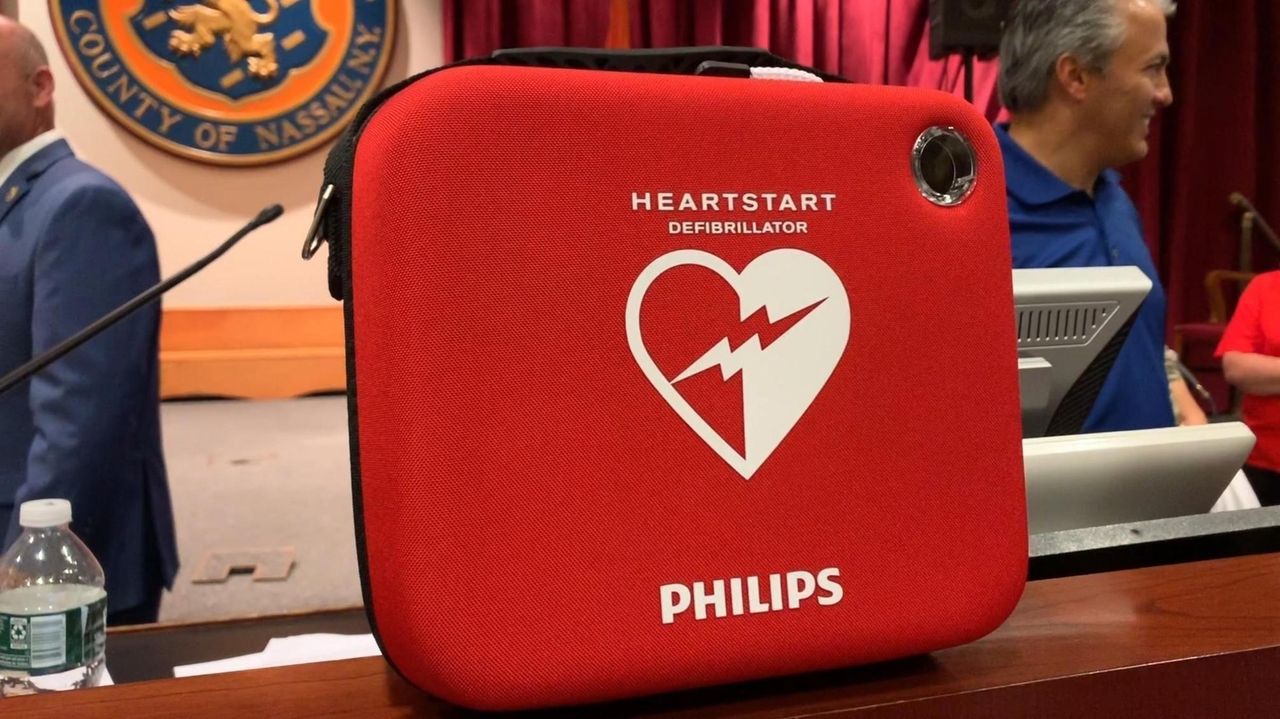 Kayla Viscusi's parents spoke Thursday in Mineola about how Nassau police and other first responders helped save their daughter's life when she was found unresponsive and without a pulse four months earlier. Credit: Howard Schnapp

Kayla Viscusi of Westbury was your typical middle schooler one day last spring when she walked into her house after jumping on her trampoline and suddenly collapsed onto her bedroom floor with no detectable pulse.

But on Thursday, the feisty 14-year-old’s recovery from her parents’ worst nightmare was hailed as a miracle, the product of quick-thinking police officers, medics and physicians whose delicate work in concert — and at breakneck speed — saved her from near-certain death.

“Without a doubt,” said Nassau County police medic Rob Spear, whose eyes welled up with tears Thursday as he recalled helping revive the teen on May 8 as the ambulance rushed to Nassau University Medical Center in East Meadow. “Doctors are calling it a miracle. It should have had a different outcome, but it didn’t.”

Kayla, her family and friends thanked the first responders who came to the girl's aid as her full recovery was announced during a news conference at Nassau police headquarters in Mineola.

“Without them, we would not have our daughter,” said Joy Viscusi, her voice cracking as she thanked Spear and others, including Nassau police medic Rob Roper and Third Precinct Officers Chris Buckley and William Borchers.

“It’s been a blessing,” said her father, Rob Viscusi, referring to his daughter’s health and the successful efforts of the officers, medics and doctors.

Kayla, who came to the ceremony in her honor with several of her friends and classmates at W.T. Clarke Middle School, said “Thank you” to the people in uniform flanking her several months after helping save her life, adding, “I feel good.”

But the happy event might not have been, if the slightest glitch in her care had occurred.

Nassau County Police Commissioner Patrick Ryder said it was about 6 p.m. on May 8 when an unusual 911 call came in for a 13-year-old girl in cardiac arrest.

The officers found Rob Viscusi performing CPR on his daughter, who had collapsed after walking into her room. That’s when the officers shocked her with an automated external defibrillator, a maneuver that Buckley said reactivated her heart just enough to sustain her until Spear and Roper arrived to administer advanced life support and rush her to NUMC.

She was transferred from there to Cohen’s Children’s Medical Center in Queens, where doctors discovered a congenital heart defect, and she underwent open-heart surgery, staying there for five weeks.

Spear, a father himself who said he was emotionally struck by the case, said Kayla was the sixth person on record to survive the defect in her heart.

“That number is staggering to think what the outcome could have been had Joy not walked into the room and found her like that, and Rob had not started CPR,” he said, calling the series of events miraculous. “Those are the two heroes of the story. … Everyone who has come in contact with her says it was, without a doubt, a miracle. Everything worked in her favor that day.”

Roper and Spear reached out to the Heather Pendergast Fund, which pays medical expenses for the children of volunteer firefighters and medics on Long Island, and asked if they could offer Kayla an automated external defibrillator.

Penny and Thomas Pendergast, president and vice president of the organization, respectively, came to the ceremony Thursday to present Kayla’s family a red case containing an AED — just in case, Thomas Pendergast said, “with our hopes and prayers that they will never need this.”