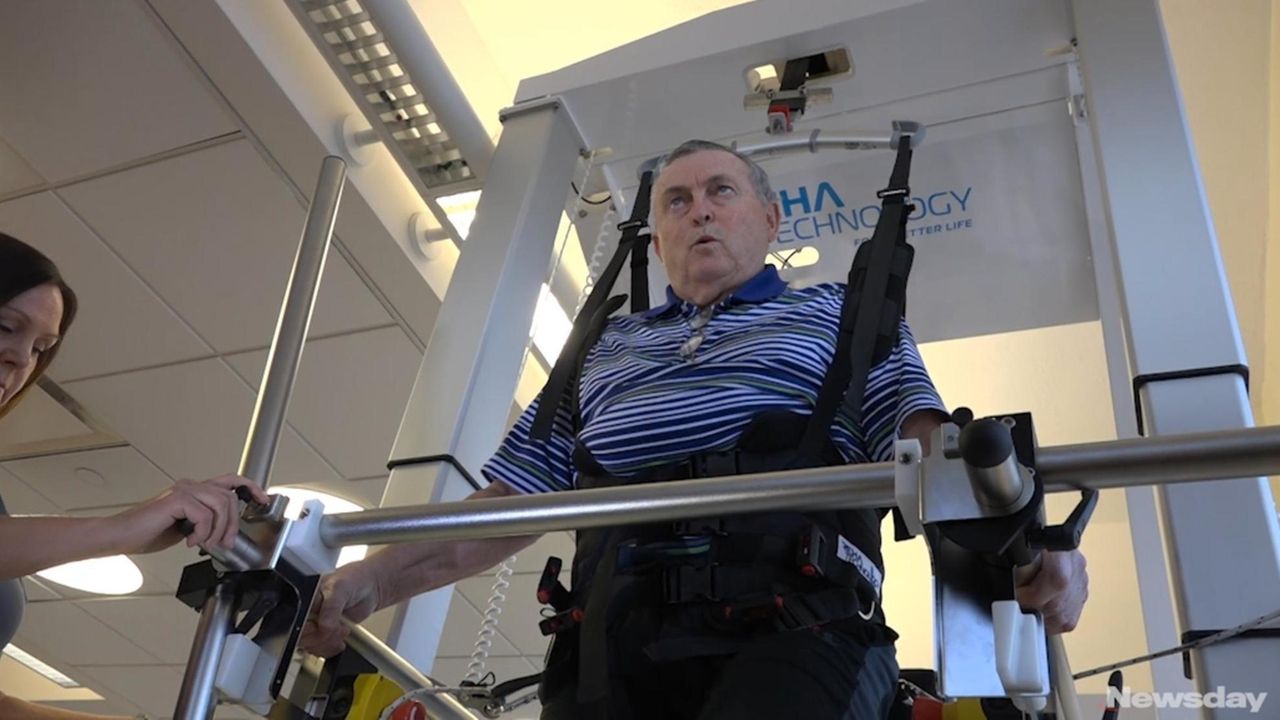 With the help of a machine that simulates walking and climbing, James Gallagher, a patient at Glen Cove Hospital who suffered from a medical condition that impaired his gait and balance, has regained his ability to walk independently on Thursday, Feb. 8, 2018.  Credit: Howard Schnapp

With the help of a machine that simulates walking and climbing, a patient at Glen Cove Hospital who suffered from a medical condition that impaired his gait and balance has regained his ability to walk independently.

James Gallagher, 70, a retired schoolteacher from South Farmingdale, was able to walk out of the rehab unit on his own Thursday when he was discharged.

“Before last week, I wasn’t walking. I was in a wheelchair,” Gallagher said at a news conference at the hospital.

Gallagher, who said he was diagnosed with hydrocephalus about six months ago, was admitted to Glen Cove Hospital, a member of Northwell Health, on Jan. 22.

Before his admission, Gallagher had surgery to remove excess cerebrospinal fluid — clear liquid that surrounds the brain and spinal cord — and had a shunt system inserted to divert excess fluid to other areas of the body.

Afterward, Gallagher’s legs were weak, his balance was diminished, and his endurance was poor, said Dianne Leone, one of the therapists who worked with him.

With traditional physical therapy, Leone said it took three therapists to help Gallagher. Two therapists held Gallagher up while he walked with the aid of a walker, and a third followed with a wheelchair so he could rest when he was tired.

Two weeks ago, Leone said she incorporated the use of the robotic-assisted machine, the G-EO System, into Gallagher’s sessions to accelerate his recovery. The machine requires one therapist to assist the patient.

The G-EO System comes with a harness that supports the patient and two computer monitors. One monitor lets the physical therapist set parameters to fit the needs of each user. The other provides the patient with feedback and allows the patient to track his or her progress.

The G-EO System, which cost $150,000 to $250,000, is the only one currently being used in New York, and it’s one of seven in service in the United States, according to Matthew Brooks, an executive with Reha Technology, a Switzerland company with offices in Blue Bell, Pennsylvania.

Glen Cove Hospital paid $220,000 for its machine, which has been used to help 50 patients, including those who had strokes, according to the hospital.

“It’s going to help a lot of patients,” said Gallagher.