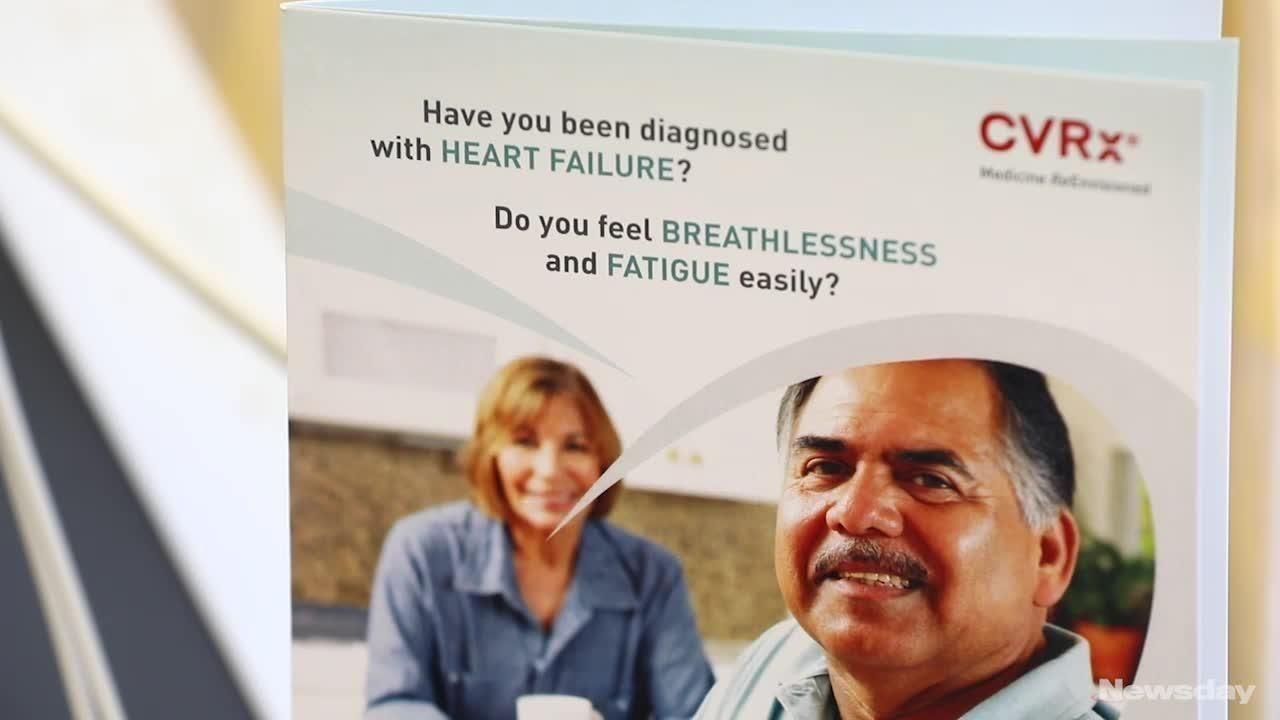 Heart failure, which is traditionally treated with medications, is being studied at St. Francis Hospital as a condition that can be controlled in some patients with electrical impulses emitted from an implanted device. The hospital is one of about 50 nationwide studying the implant, known as Barostim neo, as a therapy for the sometimes devastating disease. (March 16, 2017) Credit: Newsday / Chris Ware

Heart failure, a major public health concern traditionally treated with medications, is being studied at St. Francis Hospital as a condition that can be controlled in some patients with electrical impulses emitted from an implanted device.

The hospital is one of about 50 nationwide studying the implant as a novel therapy for a sometimes devastating form of heart disease.

Thomas Amato, 68, has become the first patient in the Northeast to receive the implant in a clinical trial underway at St. Francis in Flower Hill. The hospital hopes to enroll at least five other patients in the research.

Amato, a resident of Port Washington, said he was diagnosed with heart failure in 2010 that had been managed with medications, which included a diuretic along with dietary salt restriction.

The term heart failure, doctors say, is a something of a misnomer because it doesn’t refer to an organ that has stopped working. Instead, the term refers to a chronic, progressive disease characterized by shortness of breath and marked fluid retention in the ankles, feet and legs. Heart failure, which disproportionately affects people 65 and older, is expected to increase as the population ages.

Already, the Centers for Disease Control and Prevention estimates about 6 million people nationwide are affected and that heart failure is a contributing factor in about 1 in every 9 deaths.

“Chronic heart failure continues to be a problem although we have made a number of advances,” said Dr. Timothy J. Vittorio, the principal investigator of the implant at St. Francis. He said the device, known as Barostim neo, is being studied with the an aim of approval by the U.S. Food and Drug Administration.

Vittorio said the device is already in use throughout Europe as therapy for high blood pressure. The device controls hypertension through electrical pulses emitted from the implanted generator, which communicates with the brain.

The medical device, which consists of a generator and a lead wire, is produced by CVRx in Minnesota. It is part of an emerging science that is examining how well electrical pulses can control a wide range of medical disorders. Medical investigators at the Feinstein Institute in Manhasset, for example, are studying how a wide range of inflammatory disorders, including lupus and rheumatoid arthritis, can be controlled through electrical stimulation.

With Barostim neo, the device’s thin lead wire is implanted on the carotid artery, which runs along the side of the neck. Vittorio said the device is programmed using wireless technology to stimulate a healthier blood flow to the heart.

“I am getting along well with it,” said Amato, who before receiving the device found himself becoming easily fatigued, retaining water and feeling short of breath.

He said the condition had worsened to the point of limiting how far he could walk. But the electrical stimulation from the device now prevents fluid retention and has allowed him to resume his job as an architectural restorer.

Vittorio said the small generator, about the size of an old silver dollar, is inserted under the skin beneath the collar bone and improves cardiac activity by acting on the body’s baroreceptors, sensors located in blood vessels that monitor blood pressure and relay that information to the brain.

Those sensors are ineffective in heart failure — and hypertension. The implant overcomes nature’s deficits, according to the device’s maker.

“Heart failure comes in a lot of different varieties,” Majure said Thursday. The Bass Hospital is a division of the Northwell Health system.

One type, he said, is called systolic heart failure, which occurs when the heart’s left ventricle fails to contract normally, decreasing forces available to push blood into circulation.

Another form is known as diastolic failure, which is characterized by stiffness in the left ventricle, he said.