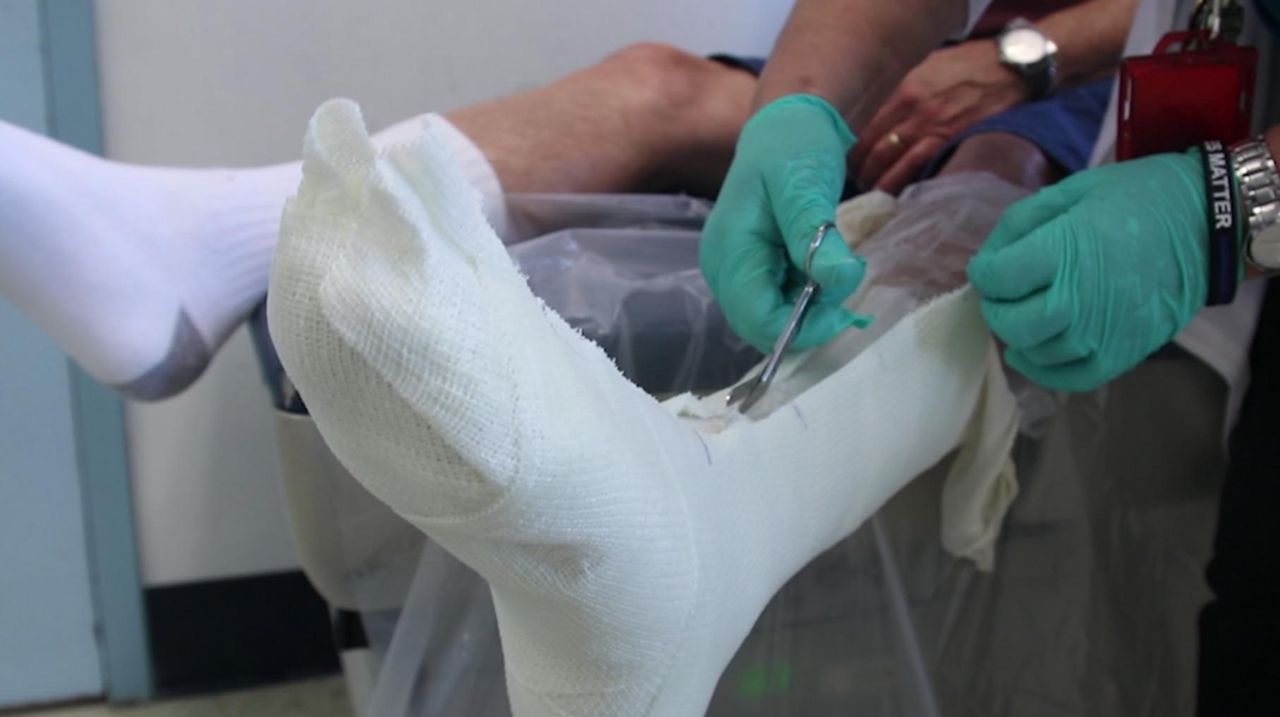 During a visit to the Northport VA Medical Center on Friday, Oct. 6, 2017, Marine veteran Anthony Yamitelli talks about possible benefit cuts to the VA that could affect his treatment for an injured foot. Credit: Jessica Rotkiewicz

As policymakers in Washington weigh how the Department of Veterans Affairs provides health care for those who have served the nation, advocates on Long Island are seeking assurances that an accelerating shift of some medical functions to the private sector will not deprive the region’s only VA hospital in Northport of precious dollars.

Congressional Republicans and President Donald Trump have proposed budgets for the coming year that would boost existing private-sector care options as a more cost-effective way to deliver services to veterans, while at the same time sparing them long drives to VA facilities and long wait times for appointments there.

“We can’t afford to continue to do what we are doing, we just don’t have the money,” said Rep. Phil Roe (R-Tenn.), chairman of the House Veterans Affairs Committee during a recent visit to the VA Medical Center Northport. “We’ve got to get it right-sized to provide quality care for those patients.”

But with billions of dollars of veterans health care spending at stake, talk of a further shift of medical functions away from VA facilities makes some veterans advocates uneasy.

“What scares a lot of veterans is the way they talk about getting rid of VA facilities, or of excess capacity in some areas,” said Kristofer Goldsmith, an Iraq War veteran and Bellmore native who is assistant director for policy and government relations for Vietnam Veterans of America. “Those fears of creeping privatization have not been allayed.”

The timing of the policy debate is especially ripe for Northport, a sprawling collection of aging buildings that faces expenditures estimated at more than $250 million to address deteriorating infrastructure, including leaking roofs, failing ventilation systems, flooding pedestrian tunnels and crumbling brickwork.

The recent move toward privatization at the VA dates back at least to 2014, when a national scandal surrounding long wait times to schedule doctor’s appointments at VA hospitals elicited demands for easier access.

Congress responded by creating the Choice Program, which allows veterans who live more than 40 miles from a VA facility, or who faced a wait of 30 days for a doctor’s appointment there, to seek treatment at a private facility and have the government pay for it.

The Trump administration has proposed spending $72.3 billion on veterans’ health care in 2018, a $4.6 billion increase over the current year. That budget includes $13.2 billion for health care at non-VA facilities — the line item that includes the Choice Program — $5.3 billion more than in 2017.

Leaders with veterans organizations worry that a too-aggressive expansion of Choice could gut the VAs’ in-house medical offerings.

“We believe that would drain resources away from the VA that would be required for the VA to improve,” said Garry Augustine, executive director of the Disabled American Veterans Washington, D.C., headquarters. “It would also be fragmented care.”

The head of the VA, Secretary David Shulkin, sought to allay those concerns in a July USA Today Op-Ed, in which he said increased spending for in-house care would be three times greater in the coming year than the increase in spending to send patients to private doctors. A VA spokesman forwarded the op-ed when asked to comment for this story, saying it reflected the position of the agency.

“Some critics complain that letting veterans choose where they get certain health care services will lead to the privatization of VA,” Shulkin wrote. “Nothing could be further from the truth.”

“We are ramping up both simultaneously in order to meet the health care needs of the veterans we are charged with serving,” Shulkin wrote.

The VA provides care to about 30,000 of Long Island’s roughly 130,000 veterans each year, according to Northport officials. Northport’s proposed budget for next year is $250 million, including $12 million for non-VA health care.

Demands on the VA health care system have increased in recent years, even as the ranks of the nation’s roughly 20 million veterans have thinned by more than 17 percent since 2001 with the fading of the World War II population, and are expected to decline another 19 percent as more Korean War and Vietnam veterans die over the next decade. According to the RAND Corp., a think tank that focused on military issues, the number of vets who use the VA health system has soared by nearly 80 percent since 2000.

A growing percentage of unenrolled veterans have begun opting into the VA system, leading to the increase in VA patients, the Rand study said.

A 2014 Congressional Budget Office comparison of VA and private sector health care costs found indications that VA care is cheaper than care provided in the private sector, while cautioning that the results were not necessarily conclusive.

“Funding for VA care and funding for Choice are two separate pots of money,” Zeldin said. “Both programs received additional funding this year.”

Rep. Thomas Suozzi (D-Glen Cove), whose 3rd Congressional District includes the Northport VA Medical Center, said he supports a strategy of offering more VA medical services in satellite clinics. But he said he opposes any overall reduction in medical staff, or a level of medical care outsourcing that would jeopardize Northport’s future.

“If you go to privatization, and if the VA budget is cut in the future, you’re left with nothing,” Suozzi said.

Biden boosting world vaccine sharing commitment by 20M doses
LI landlords call for more COVID-19 grants for eateries
How the COVID-19 pandemic changed Long Island's towns
2:18
Snowstorm closures used to scare him. No more.
NY now one of 18 states with half of adults fully vaccinated against COVID-19
1:25
Doctors disagree on whether Cuomo's decision to lift restrictions is wise
Didn’t find what you were looking for?