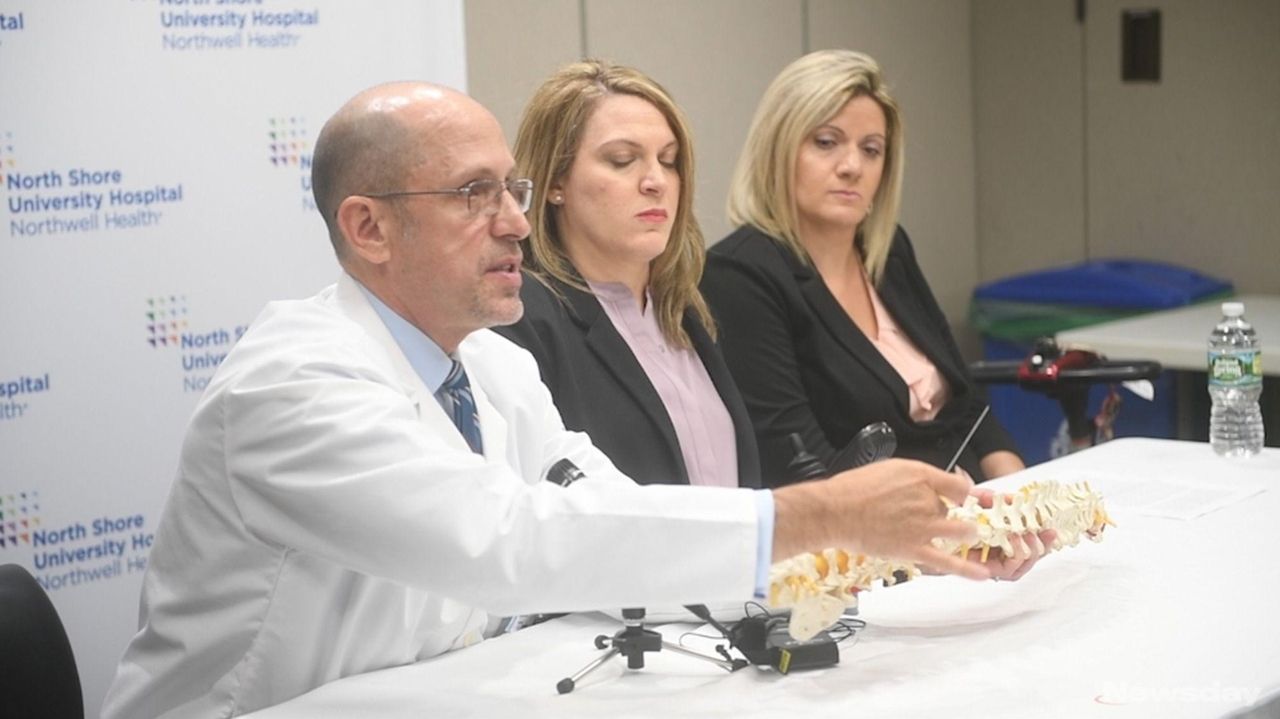 Lisa Panzica, 40, and Laura Chamaidan, 38, are two of the first patients in the state to receive a revolutionary new treatment, Spinraza, a drug that improves motor functions for patients with spinal muscular atrophy. Credit: Newsday / Alejandra Villa

Lisa Panzica, 40, and Laura Chamaidan, 38, are some of the first patients in the state to receive Spinraza, a drug that improves motor functions for patients with spinal muscular atrophy. The treatment was approved by the FDA in December.

Dr. Anthony Geraci, director of neuromuscular medicine at Northwell Health, is treating the sisters, who lost the ability to walk as a symptom of the condition. He called Spinraza “a miracle drug.”

“We saw patients and we helped them pick out their wheelchairs,” he said of treating people with the condition 20 years ago. “It’s a bit unusual and exciting for a physician, during my career, to already see such a profound change in my ability to offer a treatment to patients for who I had nothing.”

Geraci, Panzica and Chamaidan shared their experience with the drug Thursday at North Shore University Hospital in Manhasset. Geraci said the hospital is evaluating more than a dozen people for the drug and he has six already on treatment.

Spinal muscular atrophy is a genetic condition in which the nerve cells of the spinal column don’t produce enough of the protein that allows people to move their muscles. It gradually robs patients of their ability to move their limbs and breathe. The condition occurs in about 1 in 6,000 births, Geraci said.

For Panzica, it means she has to use a power wheelchair and lacks the muscle strength to even open and close the door to her office at work.

Chamaidan has more mobility than her sister and was able to walk — though very slowly — through high school before she had to move to a mobility scooter. Muscle weakness in her arms causes her to struggle to take care of her three children, she said.

“The hardest thing about being a mom [with spinal muscular atrophy] is not being able to pick them up when they cry,” Chamaidan said.

Both sisters were diagnosed with the condition when they were 8 years old. For years, doctors said there was nothing they could do.

Spinraza, which is administered through a spinal tap, doesn’t cure the condition but helps fight its effects by stimulating the production of that protein. It is the first viable, long-term treatment for spinal muscular atrophy, Geraci said.

Though Spinraza has been FDA approved for all ages, some doctors and insurers have been hesitant to treat adults because the drug’s initial studies were all conducted on children, Geraci said.

Panzica had tried another hospital that did not agree to the treatment before turning to Northwell Health, where she works as an ambulatory health information manager.

Geraci told them he saw an opportunity to build up the body of research surrounding adult use of the drug and agreed to help.

Hearing Geraci say he’d help was an emotional moment for the sisters.

“Those were the words I’ve been waiting for for a long time,” Chamaidan said.

The sisters received four initial doses of the drug in June and July. They now move to the second phase of treatment — one injection every four months, which is covered by their insurance. Patients require continued injections for life to maintain Spinraza’s effects.

There are no reported side effects from the drug yet, though it’s not without its drawbacks. Geraci said the injection, which involves sticking a 4-5 inch needle into the patient’s spine, can be unpleasant, and like most genetic treatments, it’s expensive at $125,000 per injection.

Chamaidan and Panzica said the results are worth it.

Since treatment, they feel more stable and have more stamina, they said. Panzica can now get around her office independently, something she never thought possible.

“I have been given hope and a miracle, one I never thought I’d see in my lifetime,” a tearful Panzica said.