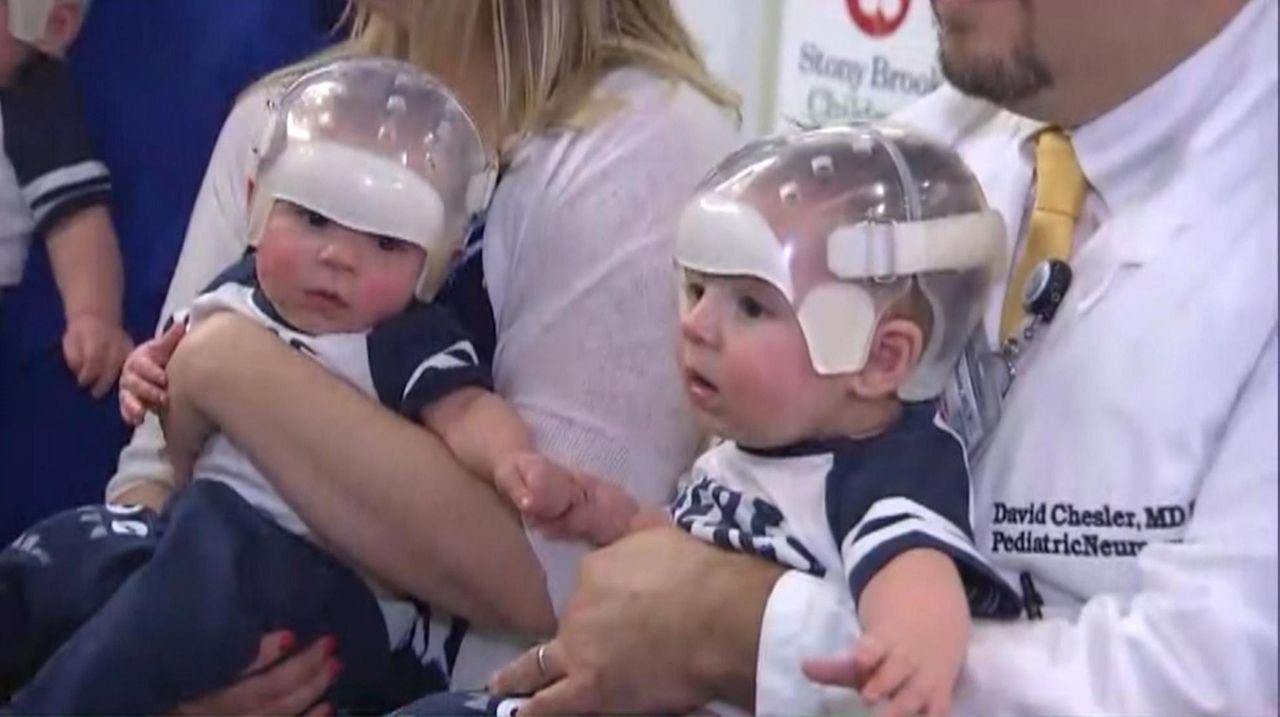 Six-month-old triplets, two identical and one fraternal, were all born with a rare skull condition known as craniosynostosis. On May 1, 2017, at Stony Brook University Hospital, doctors and the babies' parents talked about the first-ever reported surgery on triplets with the condition. The surgery was conducted at Stony Brook Children's Hospital about four months ago, when the infants were about 2 months old. Credit: News 12 Long Island

A set of 6-month-old Long Island triplets has made medical history on multiple fronts: All were born with a rare congenital skull malformation and all three boys have become the first set of triplets in the world to undergo surgery to correct it, doctors at Stony Brook announced Monday.

Hunter, Jackson and Kaden, sons of first-time parents Michael and Amy Howard of Center Moriches, were born Oct. 22, 2016, with a condition broadly known as craniosynostosis. News of the rare condition provided a worrisome note for a couple whose lives changed irrevocably with the birth of three sons at once.

“In plain English it just means the skull fused early,” said Dr. David Chesler, the pediatric neurosurgeon at Stony Brook Children’s Hospital who performed minimally invasive procedures on the boys in January. “All three had craniosynostosis, that’s what makes them so rare.”

The human skull is made up of seven plates — or bones — that are held together by tough, fibrous joints called sutures, Chesler explained during a morning news briefing.

Normally, the bones fuse together slowly after birth, he said. But some babies, like the Howard boys, experience early fusion while still in the womb. Premature fusion distorts the skull, as was the case for all three boys.

“It was a little bit scary thinking about having your eight- or nine-week-old babies having their heads cut open,” Amy Howard said, recalling the moment she and her husband were told about the need for surgery.

Going into the operations, Chesler and Dr. Elliot Duboys, associate professor of surgery at Stony Brook School of Medicine, knew the probability of craniosynostosis in a set of triplets was certain to be rare.

After they searched the medical literature — and for extra measure performed the math — they were stunned to find out exactly how rare.

There were no other instances of triplets with the condition when Chesler and Duboys searched case studies of babies with craniosynostosis. The doctors calculated the chance of such an occurrence to be 1 in 160 trillion, based on the sheer rarity of craniosynostosis in the general population.

The most common form of the disorder, sagittal synostosis, occurs in one in every 2,000 births and is the type identical twins Hunter and Jackson had, affecting the sagittal suture, which runs from front to back at the top of the skull. Sagittal synostosis can cause the head to grow long and narrow, if left uncorrected.

Fraternal triplet Kaden’s form, diagnosed as metopic synostosis, affects one in every 10,000 births, the doctors said. The metopic suture is the joint that runs from a baby’s “soft spot” at the top of the head down the forehead to the top of the nose. Closing too soon results in a skull that has a triangular, pointed appearance.

Hunter and Jackson had their corrective procedures performed on Jan. 5, while Kaden had his operation the next day.

Chesler, who has been at Stony Brook since 2014, introduced a minimally invasive procedure to correct the condition, using an endoscope with a camera through an incision only about an inch wide. The entire procedure can be completed in 90 minutes, he said, compared with an older, more invasive technique that can run hours. He performed the procedure on all three babies.

Each boy will wear a plastic helmet for the next few months, which will help reshape their heads.

Michael Howard, a plumber/mechanic, said he’s relieved that his boys are faring well. But he’s working double shifts to support a family that increased by three last fall.