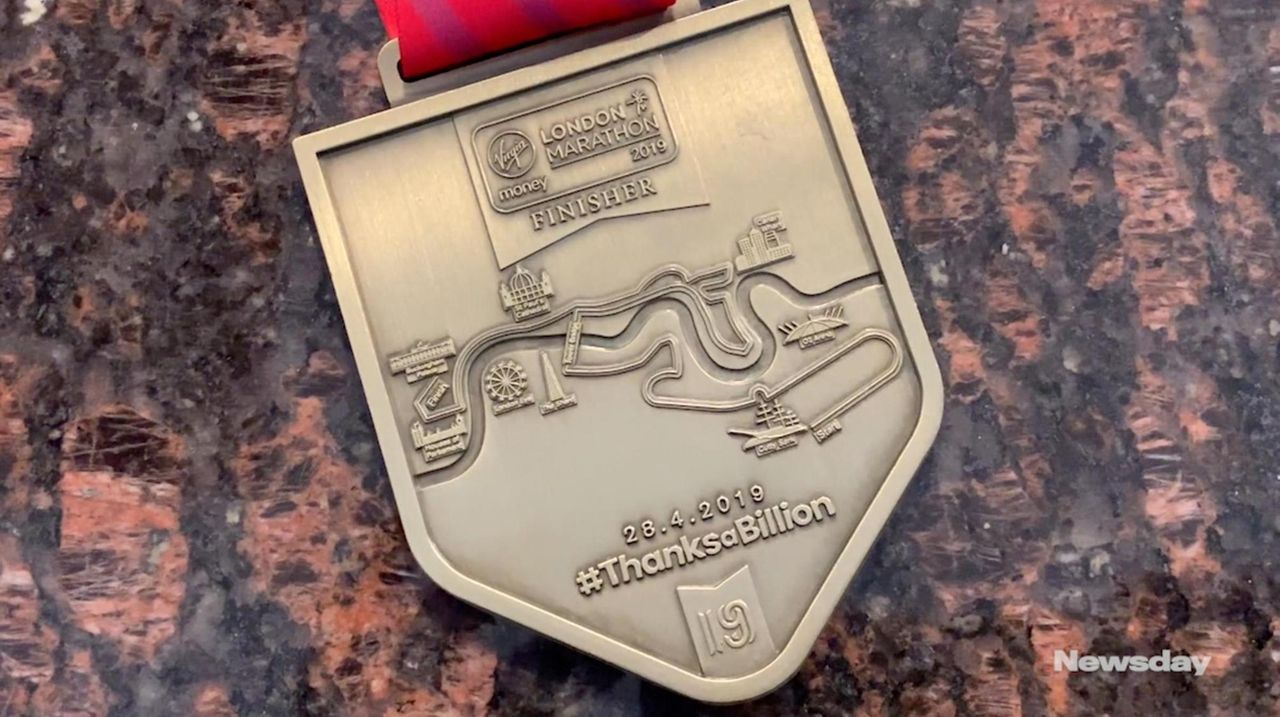 Renee Seman was diagnosed with stage 4 breast cancer in 2014 but since has run six of the world’s most prestigious marathons. She physically can’t complete another marathon, but remains active, training for long hikes and walks. Credit: Howard Schnapp

There are days when the pain from Renee Seman’s breast cancer is so severe that she can’t get out of bed.

But on April 28, the Long Beach woman crossed the finish line of the London Marathon, completing her sixth marathon since she was diagnosed with stage 4 breast cancer in 2014.

For Seman, running is like treatment. It reduces pain, mitigates the effects of chemotherapy and lifts her spirits.

“It helps me deal with living with cancer and this whole diagnosis,” she said. “It gives me the time and space to think about what’s going on. It also gives me an environment where I’m just a runner like everyone else. I’m not a cancer patient at that moment.”

Before her diagnosis, Seman, 41, had been running regularly for several years. But she had never run a 26.2-mile marathon, or even a half marathon.

When doctors told her she had breast cancer, she realized she had to make a decision: “How do I want to live my life? If I live my life dictated by the cancer, then I’m not really living.”

She went ahead with plans to run the Brooklyn Half Marathon a few weeks after her diagnosis and, after finishing without a problem, aimed higher: the 2015 New York City Marathon. After she finished that, someone told her about the Abbott World Marathon Majors, a series of six of the most prestigious marathons. Completing all of them is a goal of many runners. Seman already had finished one, New York. She was determined to complete the other five.

Renee Seman said she is happier and less on edge after exercise, and she sleeps better.

And studies have found that exercise decreases the risk of death for women with breast cancer, according to the National Cancer Institute.

Seman was physically strong for the second marathon, in Chicago, in 2016. Boston in 2017 was a bigger challenge. She had just started an experimental treatment that on marathon morning left her with intense fatigue and nausea.

Seman finished, walking up some of the hills instead of running. But post-marathon, the severe effects of the treatment led her to stop running altogether. She slipped into a profound depression, in part because of her inability to run. After the treatment ended, she began running again, which helped lift her out of her funk.

In 2018, Seman ran the Berlin Marathon without a problem. Then, starting in February 2019, Seman for the first time began feeling pain from the cancer itself, rather than from the treatments. Doctors discovered the cancer had spread further, including to her liver and lungs. The frequent pain caused her to reluctantly leave her job as a public defender in Brooklyn.

Even when Seman was in pain, she often pushed herself to power through a short run, “just to get the endorphins going so I’m not focusing on the pain.”

She finished the Tokyo Marathon in March. Then came London — the last of the six marathons.

Throughout the run, she was exhausted from a low hemoglobin count. By mile 14, she was in excruciating pain. At mile 20, she slowed to a walking pace. But she finished, earning the coveted medal made of six fused plaques featuring each of the marathon cities.

‘She will get my positivity’

David Seman, 47, Renee's husband, marvels at the grit and sheer will of his wife.

“I don’t know of a more determined athlete,” he said.

Renee Seman said she’s never asked her doctor her prognosis. She tries to be optimistic, thinking of medical advances that have helped others with cancer.

There are times when “I bawl my eyes out,” she said. But she always appears positive when she’s with the couple’s 5-year-old daughter, Diane.

“She does not deserve to grow up in a household where I’m not positive,” Seman said. “Even if I’m not feeling positive, she will get my positivity.”

Seman hasn’t run since London. After two punishing marathons within two months, continuing pain from the cancer and an injury to her Achilles tendon in London, she wants to give her body a rest. But she’s planning to start running again soon and likely will resume chemotherapy.

Exercise helps prevent the loss of muscle mass and the weakening of bones that is common with chemotherapy, and it reduces fatigue, said Dr. Susan Maltser, director of cancer rehabilitation for Northwell. Maltser cautioned that people whose cancer has spread to the bones should consult a doctor before exercising, because cancer makes bones more fragile and prone to injury.

Seman said she regularly talks with her oncologist about what type of exercise she can do. Another marathon is out of the question. But she’s planning a 27-mile, three-day hike in the Catskill Mountains with friends in June.

Seman said she hopes her perseverance serves as a lesson for her daughter on how to confront adversity “so that some time in the future, when she can appreciate what the disease is and how long I had it, and what it did to me, that won’t be the focus. What I hope is that maybe in her mind she’ll be like, ‘Wow, my mom was still able to do all this.’”