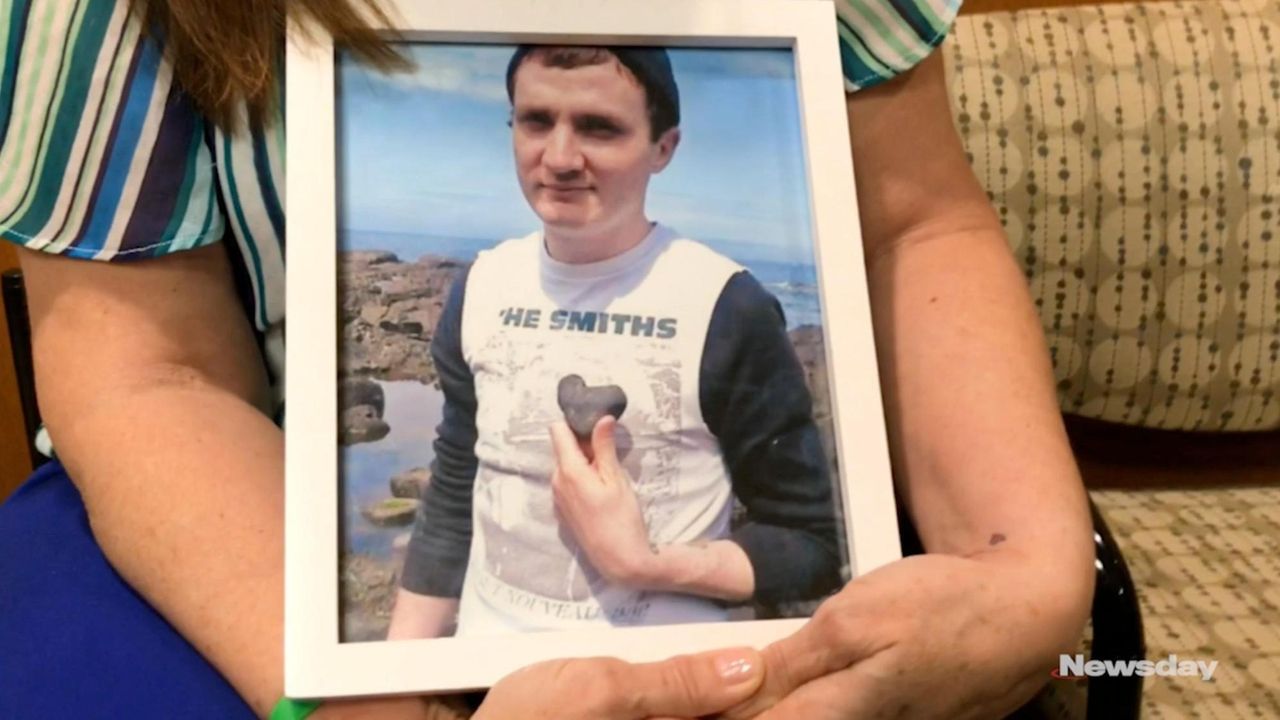 Margaret O’Reilly, 53, of Lindenhurst, discusses her son Stephen Valsechi at Organ Donor Enrollment Day at North Shore University Hospital in Manhasset on Wednesday. Valsechi died in an accident at the age of 26; his organs -- his heart, kidneys and liver — went to four recipients.  Credit: Newsday / Laura Blasey

For Margaret O’Reilly, organ donation saved the memory of her son, even if it couldn’t save his life.

Stephen Valsechi of Lindenhurst was 26 when he fell off an apartment balcony in Belfast, Northern Ireland, in 2010. Doctors couldn’t save Valsechi, but when they asked O’Reilly if she’d consider donating her son’s organs, she said yes.

“I wanted his heart to continue beating in someone else’s chest,” O’Reilly, 53, of Lindenhurst, said Wednesday at an Organ Donor Enrollment Day event in Manhasset. “I wasn’t ready for him to go.”

O’Reilly joined a group of doctors, transplant recipients and patients waiting for transplants at North Shore University Hospital to encourage potential donors to sign up. Nationally, 120,000 people are awaiting organ donations, but deceased donors provide about only 18,000 organs a year, said Dr. Lewis Teperman, director of transplantation at North Shore.

Valsechi’s heart saved a 25-year-old British man’s life. The man, who befriended O'Reilly, later got married and had children, whom O’Reilly said she treats as her own “grandbabies," with regular visits. Valsechi's organs also helped three others who needed kidneys and a liver.

“Our worst day ended up being the best day for four other families,” O'Reilly said.

New York has one of the lowest rates of donor enrollment, a major concern for Long Island doctors trying to help their patients, Teperman said. More than 7,550 New Yorkers are waiting for kidneys, and 324 are waiting for hearts, according to United Network for Organ Sharing, a nonprofit that manages the national registries.

Hearts need to come from a deceased person, either from a registered donor or with approval from the person's family. But other organs, like kidneys and livers, can come from living donors.

The challenge is to get people to sign up, experts say. Registration for people as young as 16 can be done through registerme.org for a national donor list or donatelife.ny.gov for a state list. New York hospitals check both.

Simone Tibbets, 40, of Bellmore, was diagnosed with lupus, an autoimmune condition where the body attacks itself, and kidney failure after her daughter was born in 2008. She has been on dialysis since 2011 and the transplant waiting list since 2015.

“Every day, I say yes, this call is coming and it’s going to be mine,” Tibbets said. “You have to be hopeful, that’s what keeps you going.”

Virginia Spolan, 69, of Forest Hills, Queens, said she, too, waits each day for the phone to ring, hoping it will be her doctor saying a new heart is on the way.

In 2015, she suffered a heart attack and woke up from a coma two months later. She had surgery to implant a device that artificially pumps her heart, but it’s not the same as having a functioning heart.

“I have 11 grandchildren,” she said. “I’d like to be here to see them all get married and have kids of their own.”

O’Reilly said she still mourns the loss of her son, but she’ll always be glad he chose to be a donor when he got his driver's license at age 19.

“He told me he’d registered and my answer to it was just ‘OK,’ ” she said. “I never thought it would be something I had to think about.”