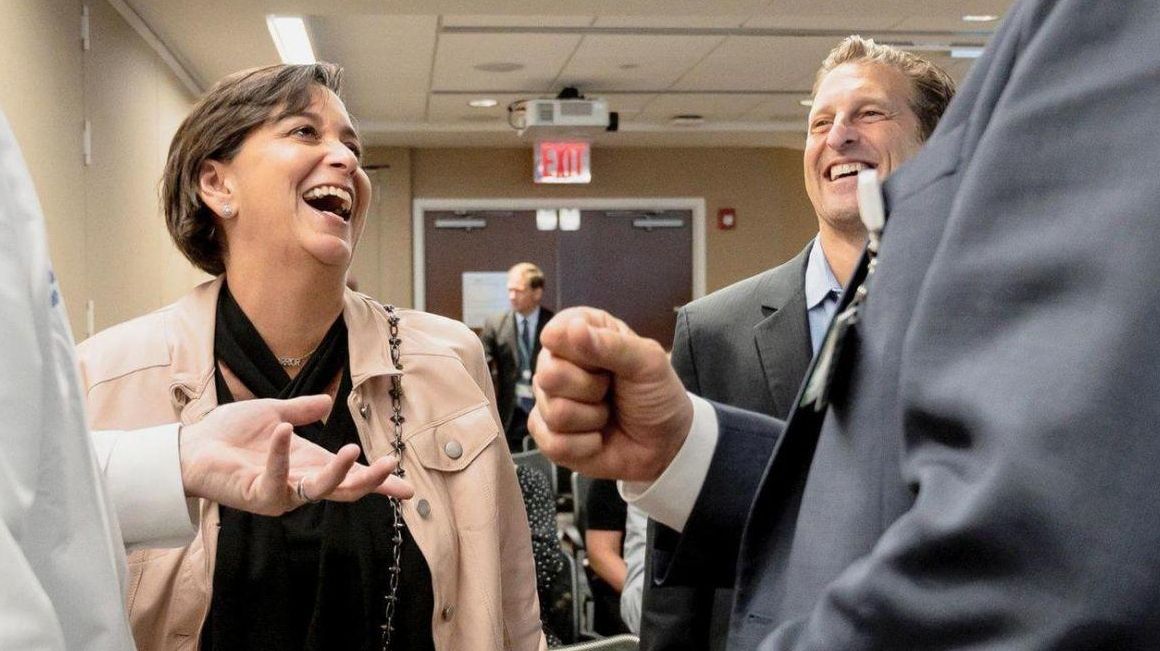 Toni Fabric remembers that Tuesday afternoon in August 2017 when she was diagnosed with pancreatic cancer. The utter panic that her life — once filled with 5K runs, family vacations and a near daily exercise routine — would never be the same.

The terror at the prospect of not celebrating another anniversary with her husband Darren or watching their three daughters graduate from college.

And the alarming prognosis. The tumor was located on the tail of her pancreas and had started to spread. Surgery was not an option. The only chance of survival, doctors told her, was to continue chemotherapy for the rest of her life.

“Nearly two years ago, I received a diagnosis that rocked my world and the world of my family,” Fabric, an Island Park native, said at a news conference Wednesday in New Hyde Park marking the opening of Northwell Health’s new Pancreatic Cancer Center. “But like so many others I am a fighter. I am brave and I got this.”

The five-year survival rate for pancreatic cancer, the nation’s third leading cause of cancer deaths, is less than 10 percent.

Fabric is challenging the odds. An agonizing 33 rounds of chemotherapy dramatically shrank the size of her tumor, making her a surprising candidate for surgery.

Two years ago. Toni and Darren, who live in Chicago, were on vacation in Spain. Fabric quickly realized something was terribly wrong. She started experiencing shooting pain in her stomach and back and began losing weight. She thought it was an ulcer. Cancer was the last thing on her mind.

After returning home and submitting to a battery of tests, she received the devastating diagnosis. “I was in total shock,” Fabric said.

The next 18 months would test the limits of Fabric like never before. A port was inserted in her chest for biweekly chemotherapy treatments, putting her “out of commission” for days on end.

“It was brutal. I was sicker than any sick I could ever imagine,” she said. “I lost 30 pounds in first six weeks until the dose was adjusted. I lost a lot of hair and developed neuropathy. This became my new normal.”

But in time the treatment paid dividends. In 2018, she consulted with Dr. Matthew Weiss, then a pancreatic surgeon at Johns Hopkins Hospital in Baltimore, who had been recruited to become the new director of surgical oncology at the Northwell Health Cancer Institute.

The chemo had worked, shrinking the tumor and surgery — once thought implausible because of the likelihood that the cancer would re-emerge — was now possible.

In March, Weiss performed surgery on Fabric at Long Island Jewish Medical Center, removing the part of her pancreas where the tumor had originated, along with her spleen and a portion of the stomach.

Fabric, who celebrated her 50th birthday last week surrounded by 100 close friends and family, has now been cancer-free for three months.

Weiss, who now heads the pancreatic cancer center, said doctors got lucky picking the right chemotherapy treatment for Fabric. But in the future, he hopes to be more precise.

The U.S. Food and Drug Administration has approved four chemotherapy drugs to treat pancreatic cancer. But until now, doctors concede it’s largely a guess which drug will be the most effective.

In consultation with Cold Spring Harbor Laboratory, Northwell is embarking on clinical trials in which researchers grow pancreatic cancer tumors in a petri dish, testing different forms of chemotherapy on the mass to determine which regimen will be the most successful.

“We are pushing the envelope in terms of trying to make patients that were once thought inoperable, or not operative candidates, to now, with good therapy, converting them to being surgical candidates,” Weiss said.

David Tuveson, director of the Cold Spring Harbor Laboratory Cancer Center and chief scientist of the Lustgarten Foundation, said the breakthrough could save thousands of lives.

“If we are right,” he said, “this is how people will be treated in this hospital, in this state, in this country and outside.”

Fabric, who plans to celebrate her birthday again next month in Long Beach with 70 former classmates from Lawrence High School, said she hoped her story inspires other cancer patients to continue fighting, no matter the odds.

“The message is you have to have hope,” she said. “You have to be positive. You have to take it day by day. You can’t focus on the big picture because its grim. … You need to get up every day and live your life.”