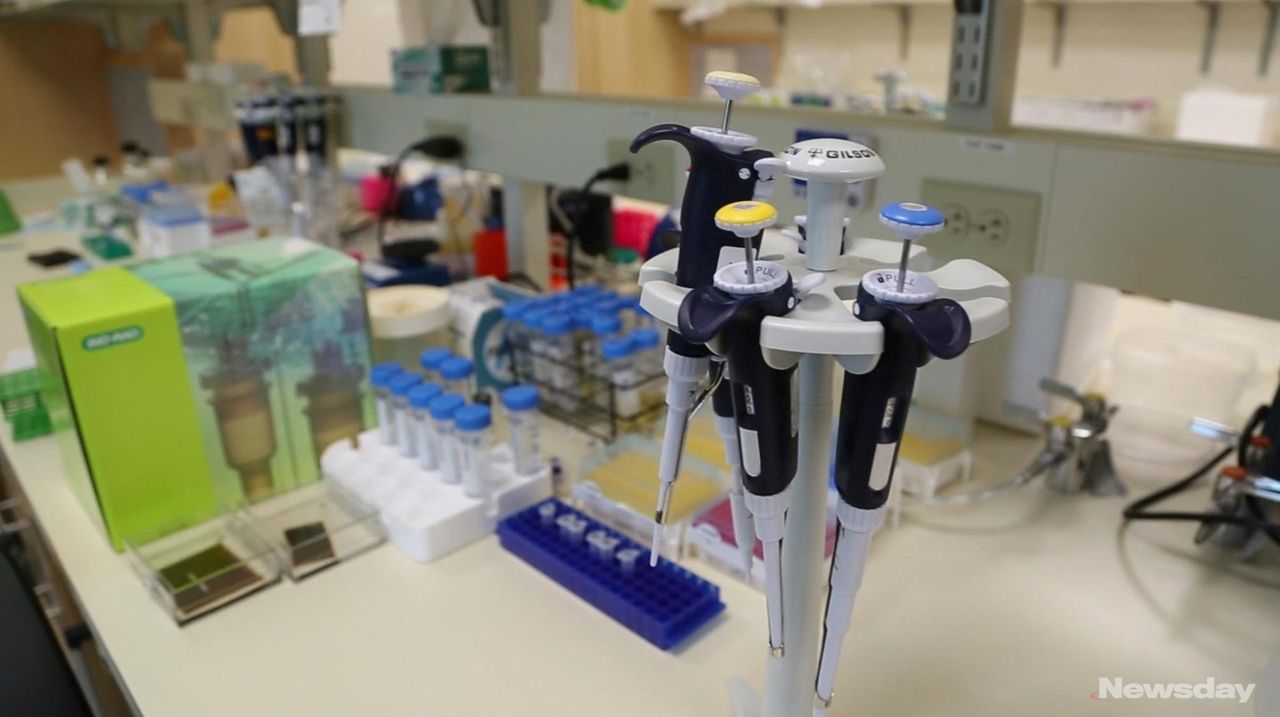 On Wednesday, Dr. Douglas Fearon, a scientist at Cold Spring Harbor Laboratory, discussed his discovery that dormant pancreatic cancer cells are lying in wait and will spread due to the effect of stress hormones which can occur shortly after cancer surgery. Credit: Barry Sloan

A Cold Spring Harbor scientist has found pathbreaking evidence on why pancreatic cancer spreads and a promising way of stopping the virulent disease before it is out of control.

In a series of groundbreaking experiments, Dr. Douglas Fearon tackled one of the biggest conundrums in tumor biology — the metastasis of pancreatic cancer.

The malignancy, often called a “silent killer,” is marked by scores of dormant cancer cells that lie in wait largely in the liver, Fearon discovered in animal studies and evocative evidence from human cases.

Within weeks after surgery for pancreatic cancer, these cells spring to life under the influence of a hormonal storm and become widely disseminated, Fearon has found.

Cold Spring Harbor professor makes discovery about Pancreatic Cancer On Wednesday, Dr. Douglas Fearon, a scientist at Cold Spring Harbor Laboratory, discussed his discovery that dormant pancreatic cancer cells are lying in wait and will spread due to the effect of stress hormones which can occur shortly after cancer surgery. Credit: Barry Sloan

Limiting the activity of certain natural hormones may prevent the development of metastatic disease, Fearon said his research suggests. He hopes to organize a clinical trial, with colleagues in the United States and abroad, to restrict aggressive stress hormones that arise after surgery.

Only 8 percent of people diagnosed with the disease are alive five years later, because it produces no distinct early symptoms, though there are rare exceptions. Screening exams for early detection are under study.

Fearon and his colleagues, in Friday’s issue of the journal Science, report that widely spread dormant cells flourish after abdominal surgery in the presence of “fight-or-flight” hormones, especially cortisol.

Stress hormones emerge after the major surgery, and the body responds with a full-blown reaction, Fearon said in an interview this week.

Cortisol and its cousin hormones not only influence the awakening of dormant cancer cells, they tamp down aggressive immune-system components such as killer T cells that are capable of keeping the cancer at bay.

What is the most fatal type of cancer on LI?

“For patients who undergo pancreatic cancer surgery, there is typically a period lasting up to two weeks during which T cells are depleted,” Fearon said. That is ample time for pancreatic cancer cells, which flowed into the liver and beyond before surgery, to become active, he said.

The immune system can kill many but not all of the cancer cells residing in the liver.

The number shed into the organ is formidable: Fearon and other scientists estimate that for a typical pancreatic cancer patient, 14 million cancer cells can pass through the liver daily before the primary tumor’s removal from the pancreas.

That means the potential seeds for secondary cancers are probably laid years before patients are aware they have the disease.

“I think most pancreatic cancer patients have metastatic cancer in the liver,” Fearon said.

However, research beyond his has shown that only 15 percent to 20 percent of patients are even eligible to have their primary tumor surgically removed. By the time most are diagnosed, the disease is so widespread the surgery is of no use.

Fearon said he first noticed, decades ago, how the medication prednisone, a powerful hormone, helped treat patients with autoimmune diseases by lessening their symptoms. A consequence, he added, was a substantial dampening of immune-system activity.

Now, he has begun to see more clearly how the body’s own stress hormones, especially cortisol, can suppress the immune system when pancreatic cancer patients need it most. The lack of immunity allows the cancer to flare up in new hot spots, he said.

Scientists are applauding the new research, and note that it adds an important chapter on understanding the consequences of metastatic pancreatic cancer. Additionally, they said, Fearon has proposed fresh ideas on how to possibly avoid it.

“There are not many studies on metastasis,” said Federica Valsecchi, research project manager at the Lustgarten Foundation in Woodbury. The foundation supports pancreatic research, including Fearon’s studies, and those of other Cold Spring Harbor Laboratory scientists who have made the disease a priority.

Valsecchi said there are many unknowns about the cancer.

“Everyone is studying how the cancer develops, and the genetics of the cancer. But if you think about the patients, they die of metastasis,” Valsecchi said. “If the cancer stayed in the pancreas, then you could remove the tumor. But it is the metastasis that is the problem.”

The American Cancer Society estimates that 55,440 people will be diagnosed with pancreatic cancer this year. The disease is expected to be found in 29,200 men and 26,240 women. About 44,330 are expected to die of it in 2018, the organization estimated in its annual vital statistics report.

In addition to Fearon’s research, the National Institutes of Health and Northwestern University reported Wednesday on progress involving their investigation into metastasis and pancreatic cancer.

The team identified a compound, which they named metarrestin, that stopped pancreatic tumor metastasis in multiple animal models.

The pancreas in health and disease

LI researchers create pancreatic drug comboMedical investigators at Cold Spring Harbor Laboratory have developed promising new insight into the basic biology of pancreatic cancer and have produced a novel drug strategy based on their findings, which they hope to soon test in a clinical trial. LI lab creates pint-size weapon in cancer fightLong Island scientists have developed miniature pancreatic "organoids" that for the first time provide investigators ...