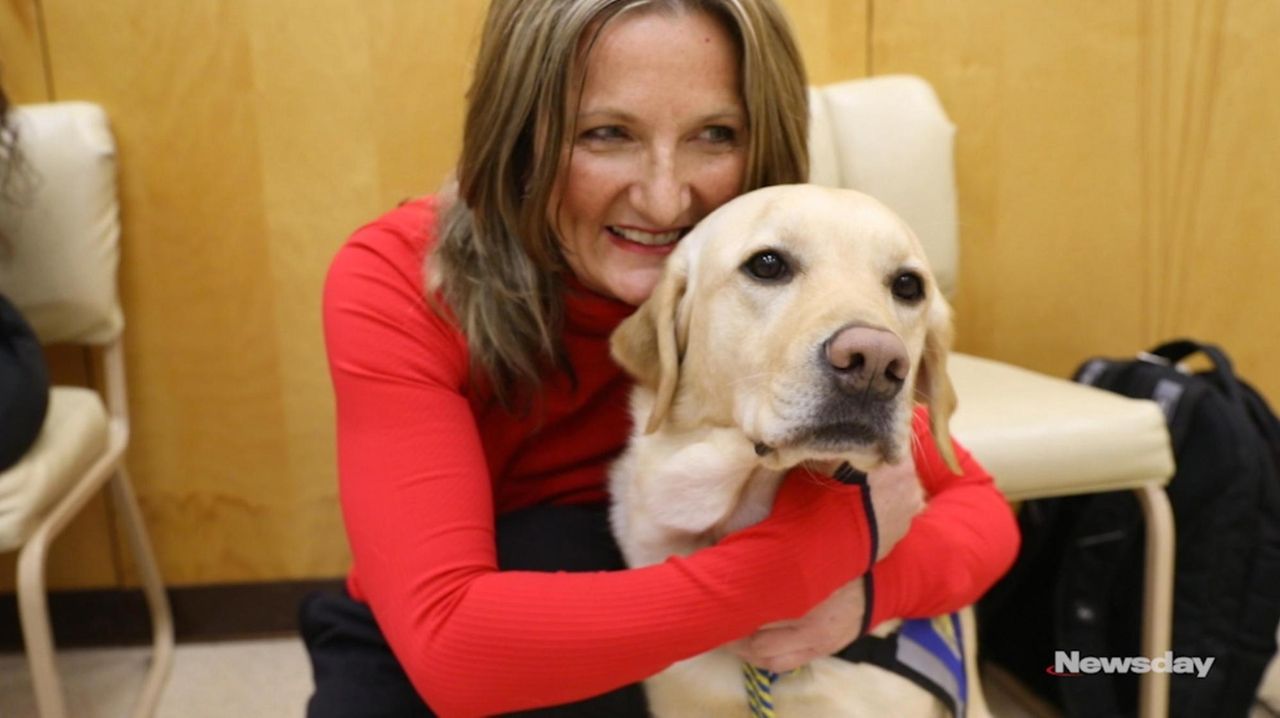 Strolling in the park. Enjoying a dinner party with friends. Stopping by a local festival.

For Amber Skylar, these are not the simple joys of life, but things to avoid. Even a quick trip to the grocery store can be a monumental task.

The 57-year-old Army veteran from Virginia struggles daily with post-traumatic stress disorder, which manifests in many ways, including through anxiety and depression. But she now is considering traveling to Montana, knowing that Arbor will be by her side. Arbor is a 2-year-old retriever specially trained to help Skylar manage her PTSD.

Arbor came from Canine Companions for Independence in Medford, which provides trained dogs for children and adults with disabilities, including veterans, at no cost. This is the first time the organization has trained dogs specifically to help veterans with PTSD in its Long Island center.

“I would like to see more beautiful things in life and get out of the safety of my cave because I don't go out a lot,” Skyler said, as Arbor sat comfortably across her lap.

Skylar had just completed an intensive two-week training course in the Medford facility, where she and Arbor learned a range of commands to assist her, such as flipping on the lights in a darkened room, gently interrupting nightmares and standing behind her to provide much-needed personal space in a public setting. The commands were developed with input from veterans and veterans administration officials.

Skylar and another veteran are the training center's inaugural graduates, recognized with a ceremony Friday. The center hopes to graduate 20 people and dogs from its PTSD program next year. The dogs undergo six months of training before they are matched with a person.

“He brings out the joy that I was born with, and he makes it safe for me to feel that,” Skylar, a yoga instructor, said about Arbor. “When people are struggling with anxiety, depression and trauma, you don’t give yourself permission for that.”

PTSD can develop after experiencing or witnessing a life-threatening event such as combat, a natural disaster, a car accident or sexual assault.

Ellen Torop, Canine Companions' program manager for the Northeast, said the PTSD training started with a pilot program at the organization's national headquarters in California.

“We’re hoping that this will help mitigate the symptoms of PTSD enough to allow them to do things they are not currently able to do,” Torop said. “In some cases, it’s extreme … like leaving the house, or it can be going certain places because it’s too overwhelming to them. They can re-engage in life because they have the confidence to do that with the dog by their side.”

Torop said the organization plans to hold four training sessions a year for veterans with PTSD. The classes are designed to be smaller than the traditional training sessions. Applicants must live within 200 miles of the Long Island office, be a veteran of the U.S. Armed Forces and meet other criteria to be considered for the program.

Claudio, a 47-year-old Navy veteran, was paired with Hannon, a 2-year-old Labrador. He already has done wonders easing Claudio’s stress and anxiety, she said.

“I get nervous, I get shaky,” said Claudio, who lives in Massachusetts. “He puts his head on my lap or sniffs my face and gives me kisses. If I’m having a nightmare, he will pull off the covers or jump into bed with me to make me feel safe.”

Mayer Bellehsen, director of the Unified Behavioral Health Center, a collaboration between Northwell Health and the Northport VA Medical Center, said while he can’t speak to the specific Canine Companions program, pairing specially trained dogs with veterans could be helpful.

“Some of the preliminary studies do show promise,” he said. “They could be a calming presence and provide companionship … there is a need for more treatment options to be developed, so exploring new avenues such as using service animals is a worthwhile effort.”

Because PTSD is different for each person, the commands can be customized, said Leah Jacobson, senior instructor at Canine Companions who worked with both Skylar and Claudio.

“Not everyone is going to have the same triggers,” Jacobson said. “We train dogs to respond to a physical cue the handler gives off, so it could be tapping their foot, moving their leg, playing with their fingers … the dog can recognize that and respond by coming and initiating an interaction, laying their head in their lap, nudging them.”

Jacobson said the dogs also can help veterans with mobility issues by teaching them to pick up items or retrieve an item from across a room.

“Training is a rigorous process,” Jacobson said. “It’s great to see their confidence build once they realize the dog is responding to them and they are developing these leadership qualities … the dogs are also providing unconditional support and love and acceptance, which is something dogs just do naturally.”

Claudio said she is looking forward to taking Hannon to her job as a patient advocate at a VA hospital in Massachusetts.

“He’ll be there to help me and to help other veterans feel comfortable in my office and in my presence when they’re feeling anxious,” she said, stroking Hannon’s head as he lounged in her lap. “He’s going to do a lot more to help me than I can even conceive of right here.”

Post-traumatic stress disorder is a mental health problem that some people develop after experiencing or witnessing a life-threatening event, like combat, a natural disaster, a car accident or sexual assault.

1:26 State sees decreasing virus positivity, but LI yields higher rate
4:01 COVID-19: From 799 deaths in one day to vaccine being 'passport' back to normalcy
Senate nears relief bill votes after half-day GOP delay
2:15 Johnson & Johnson vaccine has arrived on Long Island
What you need to know about COVID-19 vaccine development
2:29 LI's 1st COVID patient reflects 1 year later: 'I'm one of the lucky ones'
Didn’t find what you were looking for?