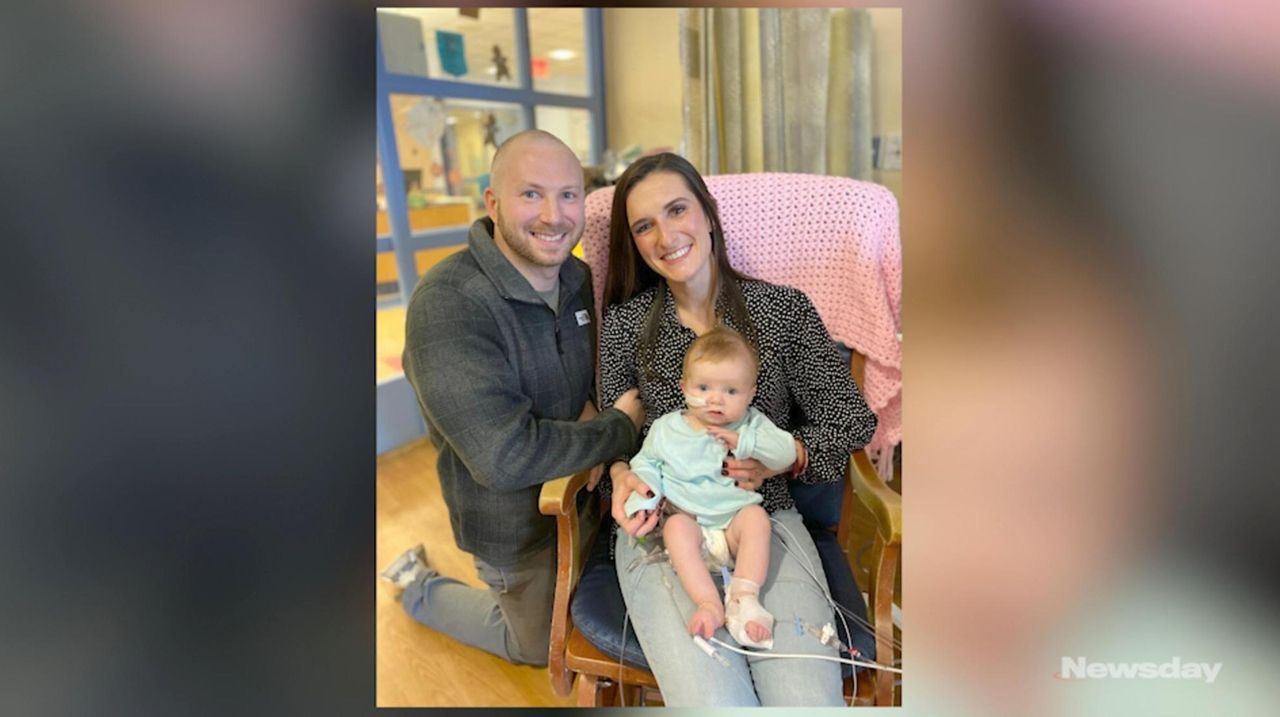 The parents of Ruby Cotter -- the 6-month-old from Wading River who has a rare and potentially fatal condition called dilated cardiomyopathy -- spoke to Newsday Friday about their daughter receiving a heart transplant Sunday, just in time for Christmas. Credit: Danielle Silverman

Somebody had a heart for Ruby Cotter this Christmas.

The 6-month-old from Wading River — who has a rare and potentially fatal condition called dilated cardiomyopathy, which restricts how blood is pumped to the body and its vital organs — got a transplant Sunday, in time for Christmas.

Now, after more than three months living in the hospital waiting with her mom and dad, Ruby could be discharged in a matter of days, said her transplant surgeon, Dr. David Kalfa of NewYork-Presbyterian Morgan Stanley Children’s Hospital and Columbia University Irving Medical Center in Manhattan — and she’s expected to be able lead a normal life, albeit needing to take immunosuppressant medication for life to prevent her body from rejecting the donated heart.

“We took out the bad heart,” implanted the new heart, “the function of the new heart was excellent” and the surgery team is “very happy,” said Kalfa, a native of France who's been involved in more than 120 pediatric heart surgeries. He's been at Columbia for seven years.

He said the surgery had no major complications.

"And Ruby, it was just perfect. Just straightforward," said Kalfa, who is collaborating with a Columbia engineer to develop a better artificial heart for children. He added: "She’s doing really, really, really great,”

But Ruby will be alive because of unspeakable loss: a brain dead child whose family donated the heart Ruby got.

“I can’t imagine what they’re feeling, so I wouldn’t try to. I would just say, ‘I love you and thank you — thank you for thinking for other people in your darkest time,’” said Ruby’s dad, Brian Cotter, 35, who serves in the 102nd Rescue Squadron in Westhampton. He added: “Hopefully, one day we can thank them.”

His wife, Ashley, 29, said that she considered the donor child's family part of hers now.

“We feel like we owe them everything, and that we will teach Ruby that this is not something that she should ever take for granted," she said, adding: "I want her to live her life and fulfill the lives of both of the child that donated and for herself ”

Details about the donor — even age and location — are kept secret for ethical and emotional reasons for all parties, the doctor said.

Asked what it's like as a parent himself to do surgery on a 6-month-old baby, Kalfa said he did his best to focus only on the job in front of him.

"The way that I manage it is not to think at all about the person behind, right? And just try to focus as much as you can on what you're doing and the technical aspect of it, right? And of course, before the surgery and after the surgery being not a mere surgeon but a human being with the parents, with the baby is extremely important. It's part of my job."

She was diagnosed Sept. 4 after first going to Stony Brook Hospital. The condition affects about 1 in 100,000 children, her pediatric cardiologist, Dr. Warren Zuckerman, said last month.

Initial signs of the condition include failing to feed well, not gaining weight, difficulty breathing and sweating. The symptoms resemble a cold or virus, and in most cases end up being just that.

The couple learned early Saturday evening that there had been a potential heart for Ruby — when the attending cardiologist came into her hospital room.

"She goes, 'What, you don't want good news?'" Ashley recalled the doctor joking. "Of course we do! But we couldn't believe that finally that this time was here."

Ruby had been using a mechanical device known as a Berlin heart — which helps assume control of the left ventricle's pumping duties — also installed by Kalfa.

The couple said they couldn't bear to watch the surgery. They waited in the hospital, at one point going across the street and having burgers with both of their own parents.

By nighttime on Sunday, Ruby had the new heart.

A GoFundMe account set up to raise money for the family’s nonmedical expenses — bills, mortgage, car payments, food — had raised $106,079 as of Friday evening.

Before Ruby's return to Wading River, the couple plans to make sure the home and the people who visit won't sicken her. Because her immune system will be suppressed for life, she'll need to take extra precautions, and likely will need a second heart transplant decades in the future, barring some medical advancement.

Kalfa said an exam of Ruby's heart that he removed would be tested by a pathologist. The results would help the family with any future pregnancies to determine whether her disease is genetic.

Brian and Ashley Cotter said they discussed having more children — but said they wanted to do more genetic testing to determine the odds a future sibling of Ruby's could develop the same heart condition.