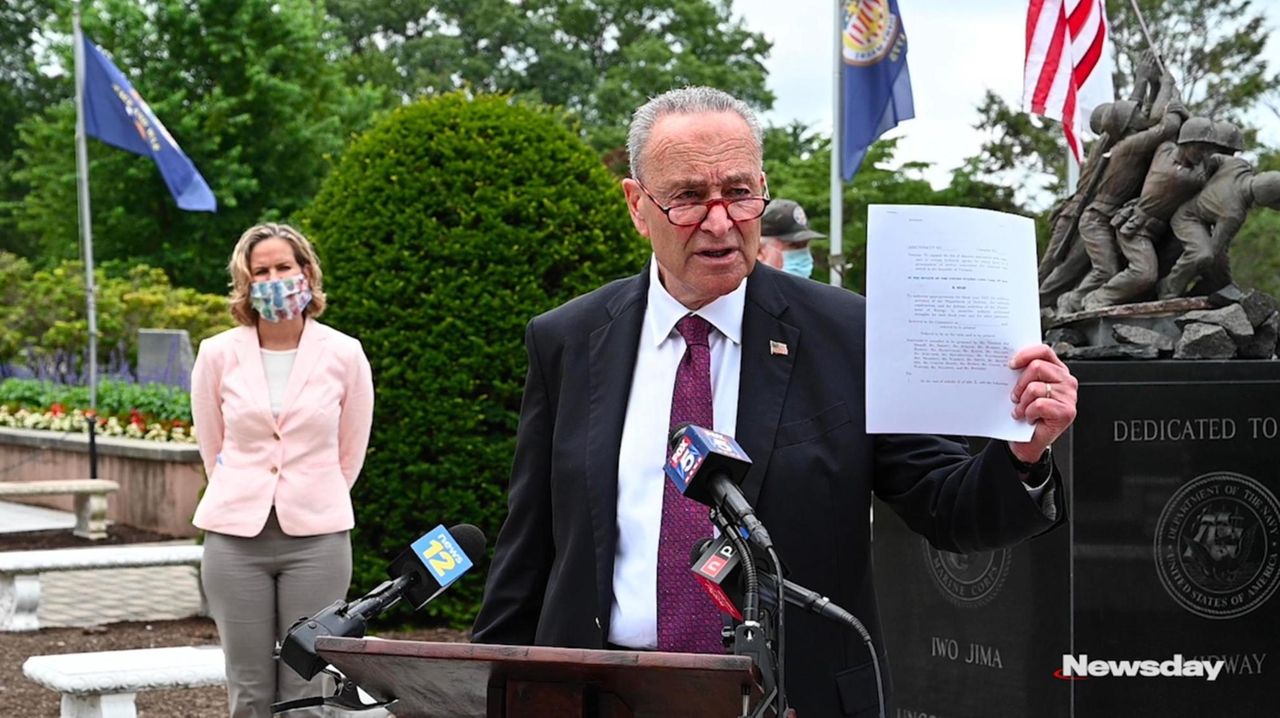 Sen. Chuck Schumer announced a plan Tuesday to expand the list of covered diseases linked to the toxic herbicide Agent Orange for Vietnam War veterans, saying it had "broad bipartisan support," and could become law in a few weeks as part of a military spending bill.

"We're about to win this fight," Schumer (D-N.Y.) said during a news conference at the Veterans Memorial at Eisenhower Park in East Meadow.

"The plan … will expand the list of diseases, will provide relief for tens of thousands of veterans on Long Island and many more in New York State and in the country," Schumer said.

The senator said the amendment is scheduled for a vote in two weeks as part of the National Defense Authorization Act. Schumer said the amendment had "broad bipartisan support. It will pass." He added, "So we're here to say relief is about to come."

Schumer said there are about 80,000 Vietnam veterans on Long Island and in New York City. New York State has about 240,000 veterans of the war.

Under the Agent Orange Act of 1991, the VA automatically accepts that any Vietnam veteran who served in-country between January 1962 and May 1975 probably was exposed to the herbicide.

Agent Orange was not used "maliciously" in Vietnam, Schumer said, but as a way to remove jungle foliage and expose the enemy. But later, "we learned that things like diabetes and leukemia and other things were caused by Agent Orange," he said.

Federal agencies have resisted adding additional ailments to the list of 14 illnesses associated with Agent Orange even though studies have shown they are linked to Vietnam vets' exposure to the herbicide, Schumer said.

"Penny-pinchers in the OMB [Office of Management and Budget] and even in the VA [Department of Veterans Affairs] have excluded thousands of veterans from getting the benefits they need," he said. "That's why we are resorting to legislation."

The agencies did not respond to a request for comment.

Schumer said the "Republican leadership agreed to put the amendment on the floor. They're in charge, but they left out one condition, hypertension, and we're going to get that in when the bill goes to the House. We're going to fight to get that in."

Curran, noting Nassau County had more than 50,000 veterans, thanked Schumer "for making sure this really important bill has bipartisan support."

John Rowan, president of Vietnam Veterans of America, said, "This has been a long time coming."

He thanked Schumer and his colleagues for working to add to "the laundry list of illnesses that we have succumbed to over the years. And we hope we get this National Defense Authorization Act bill passed and all this included. If we can sneak in the hypertension, that would be really great."