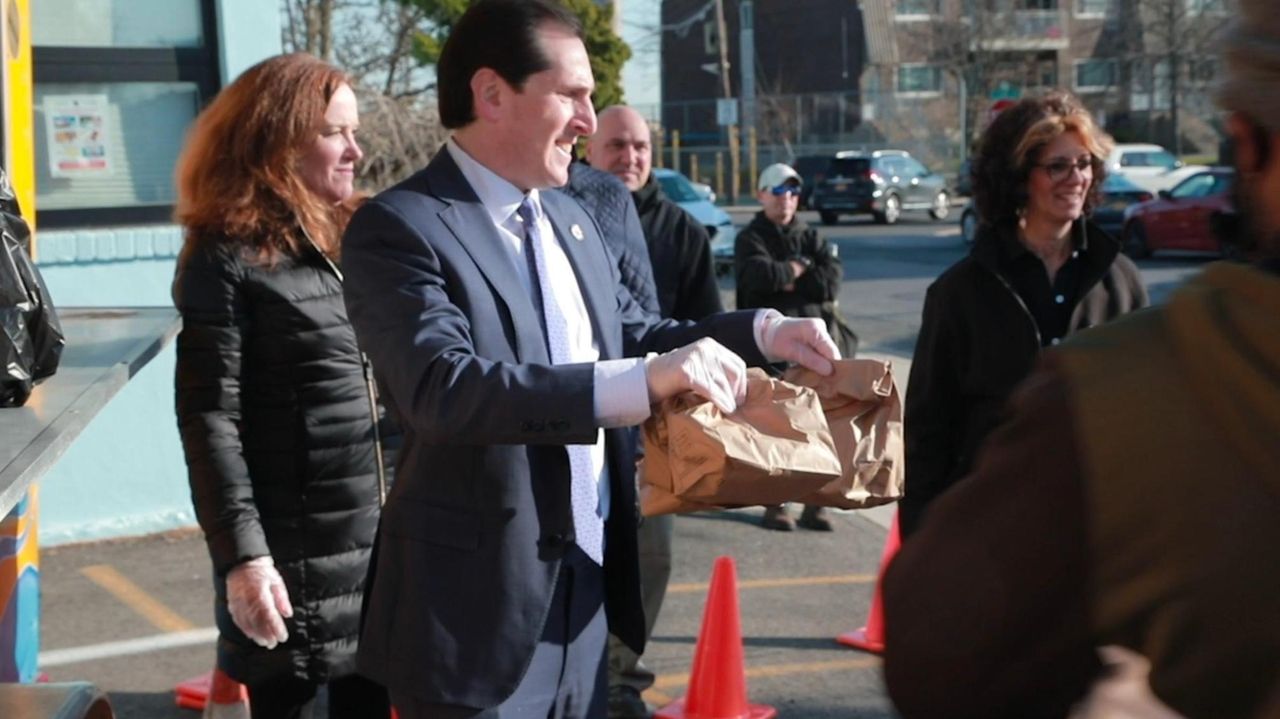 The Mary Brennan INN Soup Kitchen in Hempstead started handing out lunch to go on Monday instead of serving hot meals as food pantries and soup kitchens across Long Island feed the needy and try to prevent the spread of COVID-19.

“We decided to not serve any more hot meals as of last week,” said Jean Kelly, director of the Interfaith Nutrition Network (INN), the nonprofit that operates the soup kitchen. The kitchen was serving 250-300 hot lunches a day, but Kelly said they expect to hand out fewer bag lunches.

“Everybody who needs to be fed is getting bag lunches,” Kelly said.

The INN and other food banks and soup kitchens are having difficulty bringing in enough volunteers because COVID-19 is deadliest for senior citizens.

“The average age of the volunteers is in the low to mid-70s,” said Paule Pachter, chief executive of Long Island Cares, a Hauppauge-based nonprofit. “The volunteers that are working in pantries, they themselves are in a high-risk group.”

On Friday, the organization’s staff assembled Monday’s senior food distribution “because we had no volunteers in the warehouse,” Pachter said.

The organization delivers emergency food to 364 groups on Long Island and distributes food directly. The organizations in its network serve 65,000 people every week, Pachter said.

Stopping the community spread of the disease, rather than lack of food, is the issue causing pantries and soup kitchens to rethink their strategies or even shut down, he said.

“What I’m seeing with the soup kitchens is that they’re staggering — when people come in, if they’re open, they’re not sitting groups of people,” Pachter said, adding that some have started giving out food to go.

Long Island Cares’ warehouse in Hauppauge has 1.2 million pounds of goods, including fresh produce, canned goods, cereals and personal care items. “Food is coming in every day,” he said.

Long Island Cares’ mobile pantries deliver food directly to about 1,250 seniors. When possible, seniors receiving food are asked to walk to the truck to pick up their items, but deliveries are still being made to people’s front door with precautions.

“We certainly have masks and hand sanitizer available to us,” Pachter said.

The organization is talking to schools and governments about trying to fulfill their needs during the emergency.

Pachter said one option being considered is drive-through services at their warehouse to reduce points of contact for people.

The empty shelves that have started to become commonplace in grocery stores have created a problem for Island Harvest Food Bank. The Bethpage-based organization relies heavily on food donations from supermarkets; they in turn distribute that food or provide it to other food pantries.

“People are taking more out of the supermarkets than they normally would,” said Randi Shubin Dresner, president and chief executive of Island Harvest. This means supermarkets have less to donate. “So we have a shortfall,” she said.

In the past, about 85% to 90% of their food was donated and the rest was purchased with grant money, Dresner said. They’ve now started a fund in anticipation of having to purchase as much as 45% of their total food. They’ve also implemented controls in their warehouse to limit access to food to a small number of staff to reduce the possibility that an infected person could spread the disease.

“Hunger is a crisis every single day of the year, so we’re very accustomed to responding quickly when the need changes,” Dresner said.

In Freeport, Bob Wilson, president of the Soup to Nuts soup kitchen, said the virus was having a twofold effect on volunteers.

The other is the same issue the INN is facing with its corps of volunteers.

“There’s a little overlap. Most of them are retired people, senior citizens,” said Wilson, of Island Park. “There’s a fright that is in that community because they’re also a population that is very susceptible to getting this virus. We’ve had a lot of our volunteers not wanting to come in, and I understand that.”

Wilson said the nonprofit is now just distributing bagged lunches, which he said consisted of a sandwich, a drink, a piece of fruit and dessert. Clients are met at the top of the stairs so they don't come into the building, he said, adding that not serving a hot meal means fewer volunteers and prep time are needed.

Despite the need, Wilson said they've also seen a decrease in clients.

The food banks are encouraged to use more mobile distribution options. For example a church parking lot distribution could allow people to drive through with their trunk open and the food would be loaded directly into the trunk of the car, Villarreal said.

They also recommend food pantries schedule appointments rather than keep open hours “to protect the safety of the staff and the individuals attending the pantries.”

Food banks and meal providers are likely to get busier in the coming weeks, Villarreal said.

A letter from the publisherThe health and safety of our Newsday family — our subscribers, single copy readers, advertisers and of course, our employees — is of paramount importance to us here at Newsday. PSEG implements coronavirus emergency response planNew protocols include a team to respond to homes of potentially infected customers and closure of walk-in service centers. What you need to know about changes in your townThe coronavirus pandemic has caused closings and changes to meetings, events and policies in towns, cities and libraries around Long Island. Official: Closing LI, NYC schools 'is the right thing to do'County officials said they also weighed the burden closing schools would put on parents to find childcare, and for students in need who rely on schools for breakfasts and lunches.