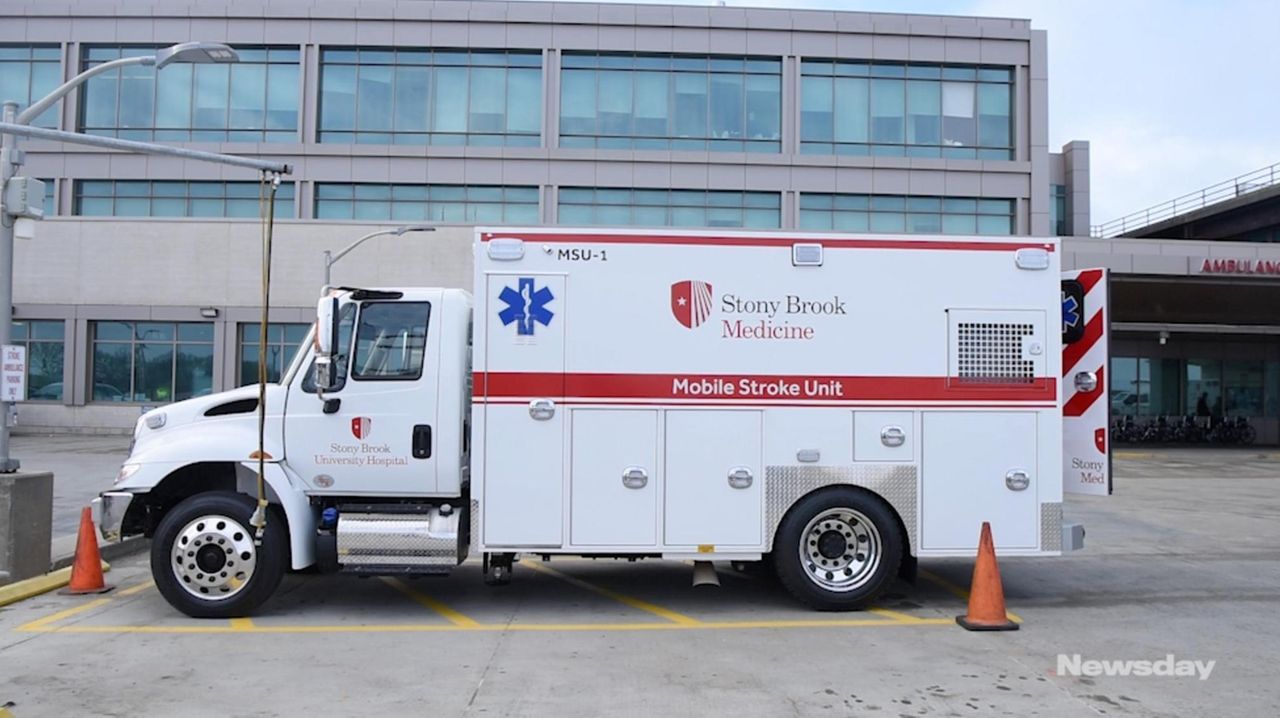 Two mobile stroke units — rolling emergency rooms — will hit the road April 1, and all care administered by their crews, including CT scans and stroke-alleviating medications, will be free to patients. All costs are being absorbed by Stony Brook, mobile unit administrators said.

The program’s aim is to provide emergency care at the site where the stroke occurred — at a patient’s home, workplace or other venue. Each unit costs $1.1 million and will operate seven days a week between the hours of 8 a.m. and 8 p.m., a period when strokes have been estimated to most commonly occur, Stony Brook experts said.

“In my opinion, this is one of the biggest public health breakthroughs that we have had in recent history. It is absolutely phenomenal that we will have mobile stroke units in Suffolk County,” said Suffolk Legis. William “Doc” Spencer, a physician and specialist in otolaryngology who represents the county’s 18th district. He endorsed the Stony Brook plan before the legislature earlier this month.

Stroke mobile units operating in other cities have been able to reach patients in as few as seven to eight minutes, administrators of these programs told Newsday.

Nationally, stroke is one of the most expensive medical conditions, running about $34 billion annually, according to the Centers for Disease Control and Prevention.

“The most important thing that Suffolk residents should know is that this is a collaborative effort with local emergency medical services,” said Dr. David Fiorella, a neurointerventionist and director of the cerebrovascular program at Stony Brook’s Cerebrovascular & Comprehensive Stroke Center.

Each mobile unit is a mini-emergency room and will carry a critical care nurse, paramedic, emergency medical technician and CT technologist. Inside each vehicle are pharmaceuticals that can treat either of the two types of strokes that can impair the brain, as well as an eight-slice CT scanner that can provide multiple images of the site where the stroke occurred.

State-of-the-art telemedicine instrumentation also is onboard, which will allow the crew to relay CT scans and other medical information about patients directly to Stony Brook specialists.

Emergency stroke services are free to patients, as is the administration of any medications, including the clot-busting drug tPA  — tissue plasminogen activator — which costs about $7,000 for a single dose, Fiorella said.

“Stony Brook is a state hospital, and this is a way of investing back in the local community,” Fiorella said.

One unit will be stationed at an industrial complex near the Long Island Expressway’s Exit 57 in Islandia. The other will be at a similar complex near LIE Exit 68 in Shirley. The locations are strategic, program administrators said, because they provide rapid North-South and East-West access.

Neither unit will cover all of Suffolk County, but will roll within a 10-mile radius of their respective base stations, said Eric Niegelberg, administrative director for Emergency Medicine Services at Stony Brook and director of the mobile stroke unit program.

Islandia and Shirley were chosen for specific medical and location reasons, Niegelberg said.

“We chose them based upon ready access [to the LIE] and stroke call volume,” he said.

Much of the data underlying a need for the mobile units comes from extensive Stony Brook research on strokes treated at its comprehensive stroke center.

All told, about 1,000 people are admitted for emergency stroke care at Stony Brook annually, said Fiorella, noting that patients will be triaged in the field after emergency evaluation and treatment, then rushed to the nearest stroke treatment center.

Not every patient needs to be seen at Stony Brook’s comprehensive center, he added, because some patients can be expertly cared for at a primary stroke center at other Suffolk hospitals.

A comprehensive stroke center cares for all types of stroke patients,  those whose brain injury is “ischemic,” meaning caused by a clot, and those that are “hemorrhagic,” which means the stroke was caused by bleeding in the brain.  These centers have round-the-clock availability of doctors who perform a wide range of neurovascular procedures. Primary stroke care centers often transfer complex cases to comprehensive care facilities.

“This is not a zero-sum game where Stony Brook wins and everyone else loses,” Fiorella said, referring to the vehicles steering all stroke cases to Stony Brook.

“This is a situation where everyone wins,” especially patients who will be treated sooner, Fiorella said.

He hopes to see the expansion of the program in the coming years with the addition of more units and serving a greater area of Suffolk County.

Stroke constitutes a major public health concern nationwide. Every 40 seconds someone in the United States suffers a stroke, and every four minutes someone dies of it, according to data from the American Heart Association.

Stroke is the third-leading cause of death in the United States and the No. 1 cause of long-term disability. Each year, about 795,000 people suffer a stroke, 87 percent of which are ischemic, which means a clot has blocked blood flow to the brain; the remaining percentage is made up of hemorrhagic strokes, which means a weakened or burst blood vessel has caused bleeding in the brain. Below is the FAST way of recognizing a stroke: