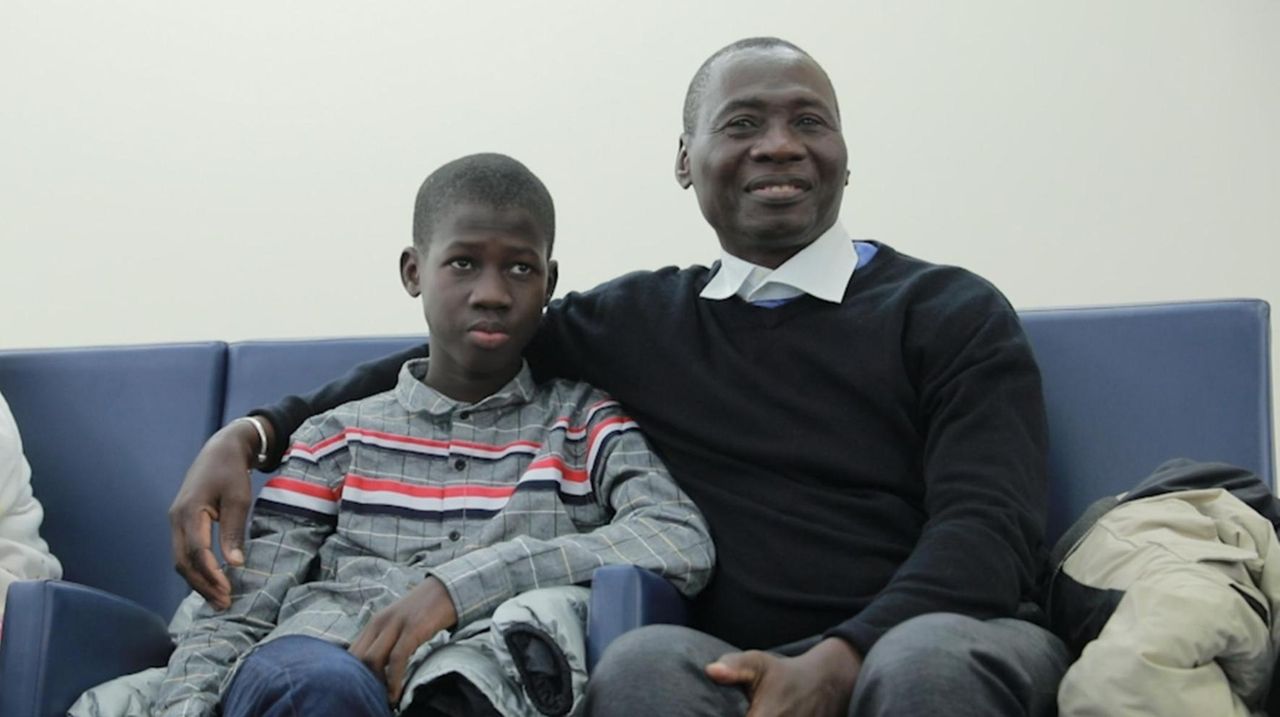 For years, Ambrus Correa felt exhausted every time he played his favorite sport, soccer, in his homeland of Gambia in Africa.

He would wheeze and feel weak.

Eventually doctors discovered what was ailing him: he had a hole in his heart. But the medical facilities to treat him were not available in Gambia.

That is when the Fresh Meadows-based Gift of Life International organization stepped in to try to save the 14-year old.

The group transported him and his father to St. Francis Hospital in Roslyn, where doctors last week performed special surgery to effectively plug the hole.

Now Ambrus and his father are about to spend their first Thanksgiving in the United States with much to be thankful for.

“I want to thank every one of you,” Simon Correa, 56, told the team that operated on his son as they gathered at a news conference at the hospital Tuesday.

Then he could not go on. He buried his face in his hands as he sobbed in joy and relief.

Chairman of pediatric cardiology at St Francis, Dr. Sean Levchuck, who performed the surgery, said that without it the teenager would have been seriously at risk. That would have been especially the case as he grew into adulthood.

“He should be good to go” now, Levchuck said.

Ambrus was shy in front of the television cameras, but said he was “feeling good” and was anxious to return home to play soccer.

He kicked a soccer ball with his dad in the lobby, then juggled it with his feet.

James LaMantia, of Gift of Life, said the organization has helped arrange surgeries for more than 35,000 children since its founding 44 years ago. The group helps children in 80 countries.

Some 1.2 million children are born with a congenital heart disease every year and 93% of them are in countries where the medical expertise to fix it does not exist, he said.

Simon Correa said his son had difficulty breathing from the time he was born. The father often thought he had some kind of infection, and would go to the pharmacy to buy an antibiotic.

But the boy never improved.

Finally, when he was 10 years old, his father took him to the hospital where he works. They did some testing and “discovered that he has a hole in the heart,” his father said.

He hoped to bring his son to England for surgery through another nonprofit group, but after years of trying that did not work out.

Then he contacted the Gift of Life organization in the United States, which took on his case and connected him with St. Francis. They arrived on Nov. 8, and the surgery was last Wednesday. They head back to their homeland on Dec. 19. Their expenses, including medical, were paid for by Gift of Life and the Long Island-based Nicholas J. Vizza Fund.

For Simon, it felt as if doctors were operating on his own heart.

“It is emotional because I felt it is almost like in me,” he said.

A third Pfizer shot? It's 'likely,' says CEO
1:35
For LI's vulnerable homeless population, a place to get vaccinated
Polls: Staffing, COVID precautions are hurdles to firms' growth
Should kids get a shot? Long Island parents differ on COVID-19 vaccine
1:55
This recession — aka 'she-cession' —  is hitting women especially hard
Island adds over 16,000 jobs in March, state data shows
Didn’t find what you were looking for?