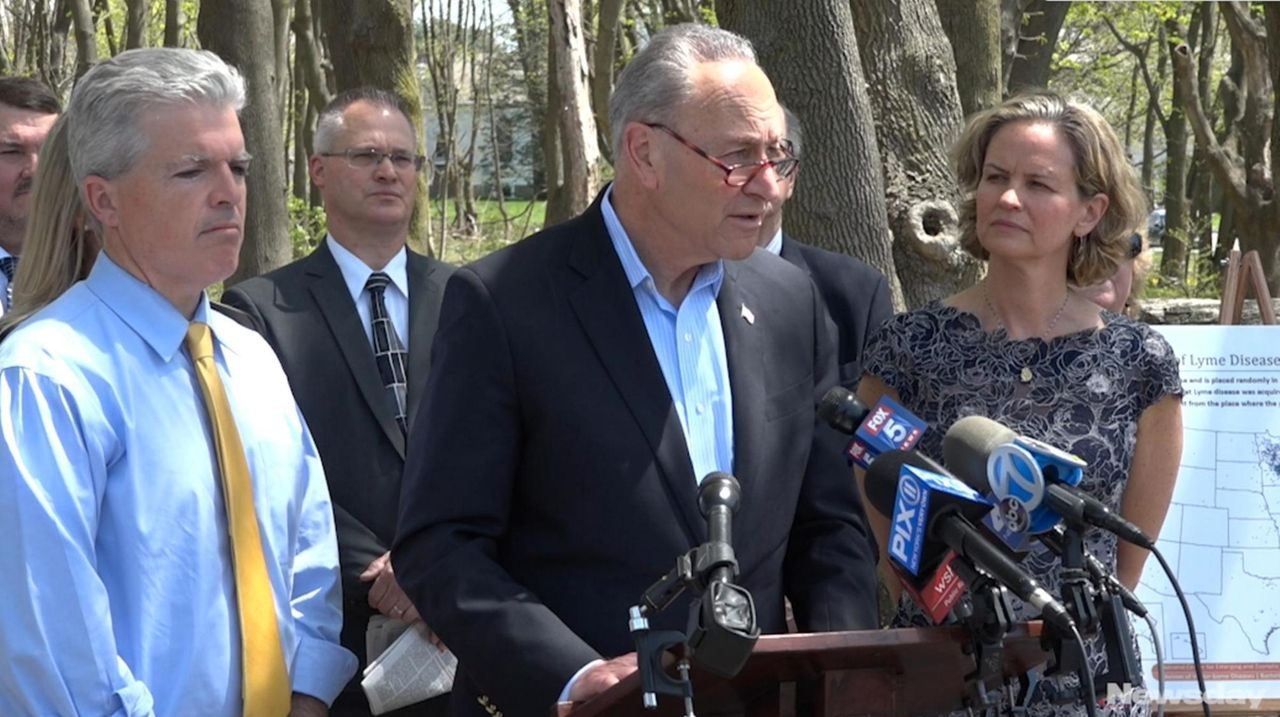 At a Wednesday news conference, Sen. Chuck Schumer talked about the prevalence of illnesses transmitted by ticks on Long Island and New York State, and urged the Centers for Disease Control and Prevention to use some of the money it received from a recent bipartisan budget deal to fight the spread of the insects. Credit: Howard Schnapp

The Centers for Disease Control and Prevention has enough money to fund an aggressive war on ticks in New York — especially on Long Island — thanks to nearly $1 billion more in its budget, Sen. Chuck Schumer said Wednesday.

He called on the CDC to allocate some of that money to New York.

Among the 50 states, New York is the most impacted by the eight-legged creatures and Long Island is ground zero for Lyme disease, the No. 1 tick-transmitted infection worldwide, scientists have found.

The CDC received a 10 percent boost over previous years — about $900 million more. The money is from the massive $1.3 trillion omnibus spending package, approved earlier this year, Schumer said.

A portion of that money is desperately needed in New York, according to the senator, for surveillance, treatment and prevention.

“Why are we here? I am afraid this money will sit in limbo,” said Schumer, who was joined at a news briefing Wednesday by the county executives for Nassau and Suffolk, leading Long Island entomologists and advocates for people who have been bitten by ticks.

Schumer said he spoke with CDC director Dr. Robert Redfield last week about New York’s escalating tick crisis and the need for special funding. Wednesday he made his plea public.

Although Schumer did not indicate a specific dollar amount, he underscored that money is needed to combat ticks and monitor their movements, and to better educate consumers about protection when in tick-infested areas.

He and others at the briefing said they would like to see researchers develop cures for tick-borne diseases, as well as vaccines and new tick eradication strategies.

Although many cases go uncounted, experts attribute the dramatic difference in Lyme disease tallies to the dense infiltration of ticks in Suffolk.

“The outdoors is beautiful but it comes with dangers,” Schumer said at the briefing held at Trail View State Park, a 454-acre brushy and deeply arbored greenbelt on the Nassau–Suffolk border.

Ticks have long thrived in the park and a yellow sign at the entrance warned visitors of potential Lyme disease.

Schumer’s funding plea dovetailed with a new CDC report released earlier this week that revealed illnesses caused by ticks — and other disease-transmitting insects — more than tripled nationwide from 2004 to 2016.

While the agency blamed “warming temperatures” as one reason for ticks expanding their range, Schumer — who was bitten by a tick and suffered Lyme disease a decade ago — said scientists attribute the tick expansion to global climate change.

Suffolk’s dense tick infiltration is unsettling, County Executive Steve Bellone said. “This is not something we want to be No. 1 in. We need more help, more surveillance. This is a critical emergency.”

His counterpart, Nassau County Executive Laura Curran, said she intimately knows the severity of a tick-transmitted illness: “My daughter came down with Lyme disease,” Curran said.

“The role of this news conference is not to scare people,” Curran added. “It’s to make them aware.”

Scott Campbell, chief of the Suffolk County Department of Health’s arthropod disease laboratory, brought a vial of live ticks to the news briefing to illustrate their infinitesimal size — about the diameter of a pinhead.

Campbell and Jody Gangloff-Kaufmann, an urban entomologist with the Cornell Cooperative Extension in Babylon, both warned of a newly arrived tick in this country. It was first identified in China in 2009 and known to carry a virus that causes a severe fever.

“It’s not on Long Island yet but it has been found in New Jersey,” Gangloff-Kaufmann said.

The pest is called the Longhorned tick, which feeds on humans and animals, she added, and can pose a danger to the dairy industry.