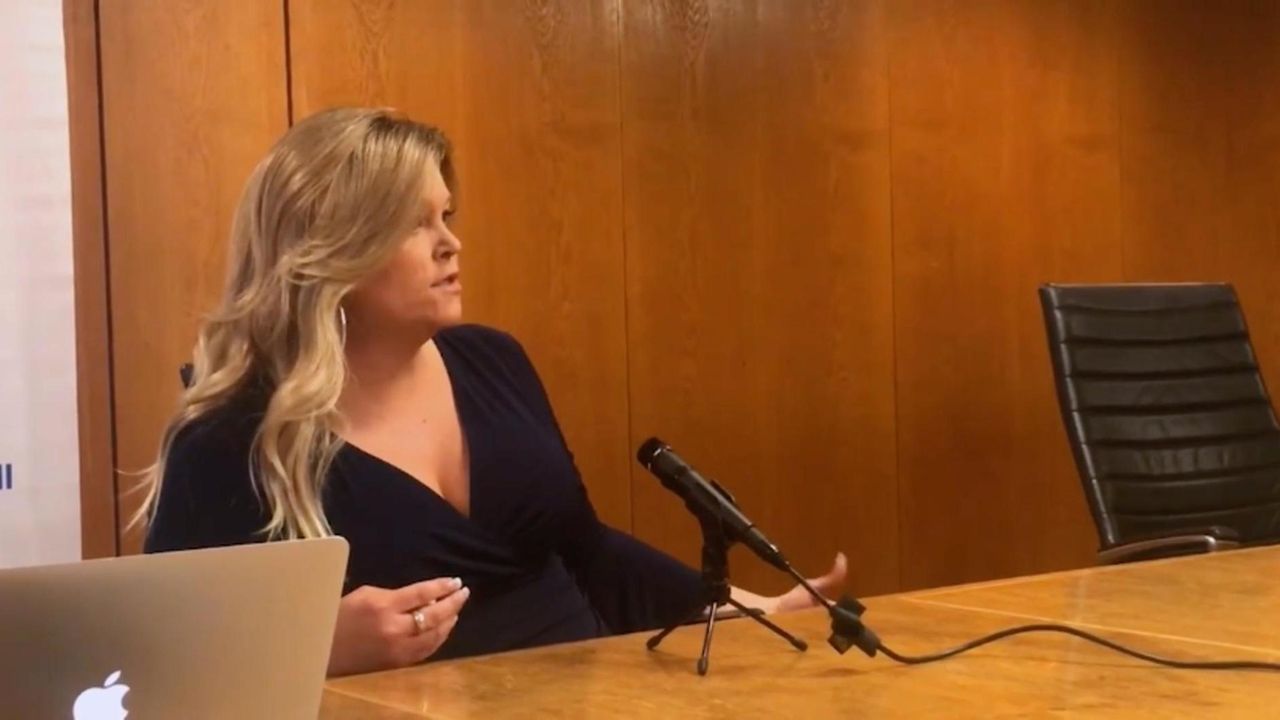 Jennifer Bobbi, of Merrick, discussed her transition from male to female on Thursday at North Shore University Hospital. Bobbi is one of the first transgender patients to receive breast augmentation surgery at the hospital. She was joined by her plastic surgeon, Dr. Adam Perry. Credit: Newsday / Janelle Griffith

Nearly five decades into her life, Jennifer Bobbi is finally comfortable with her body.

Bobbi is one of the first transgender patients to undergo breast augmentation surgery at North Shore University Hospital in Manhasset. She returned to the hospital Thursday to discuss her journey from male to female.

“It’s easier when you feel one with your body,” Bobbi said, “and your brain matches your body.”

Bobbi, once regarded as Long Island’s top-selling Tupperware consultant, was joined at a news conference by her plastic surgeon, Dr. Adam Perry, a specialist in transgender surgery. On Feb. 28, Perry performed a two-hour operation to insert breast implants.

“It’s important for me to be visible,” said Bobbi, 49, of Merrick. “There are many transgender adults and kids out there that need to see that it is possible for them to live their truth.”

Bobbi said she has identified as female since she was 4, when she first communicated her feelings of gender dysphoria to her mother.

On Thursday, she made public her very private journey.

Bobbi said she tried to kill herself when she was 15; if she had succeeded, she said she would have been remembered as “a depressed teenager who took her own life” rather than be recognized as a transgender person.

“In 2014, at the age of 45, I found it impossible to continue living with the stress of gender dysphoria,” Bobbi said. “I decided to take one year to do research and seriously consider either ending my life or finally transitioning.”

A year later, in March 2015, she started counseling at the LGBT Network of Long Island and underwent hormone replacement therapy at Callen-Lorde Community Health Center in Manhattan.

For its part, Perry said, Northwell Health wants to be a one-stop shop for pre- and post- mental, physical and operative care for transgender patients.

“Something that has allowed us to get more information and start building services for the transgender population is insurance coverage,” Perry said. “This is something that is a relatively recent development in the last few years. New York state is actually a leader in that realm.”

Northwell’s Center for Transgender Care, which opened in 2016, is leading the charge in an effort to provide medical treatment to an underserved community, he said.

Bobbi, a Freeport native, once was the top-selling Tupperware sales consultant in North America. She credits much of her success then to her larger-than-life sassy drag queen character Aunt Barbara. But discussing her transition led to a decline in her home party bookings, she said.

“While I had heard that some people had canceled with me because they or their guests were uncomfortable with my being transgender, I also think that simply revealing something personal about myself destroyed some of the illusion of Aunt Barbara,” Bobbi said.

Transitioning has cost her financially, too. All told, Bobbi has spent about $30,000 on procedures and treatments that range from electrolysis to softening of her facial features.

To pay the bills, Bobbi said she lives modestly and works three jobs including one as an executive assistant to the president of a Long Island nonprofit. And she performs in local theaters and on television. Most recently, she appeared on ABC’s “What Would You Do?” where she portrayed a transgender shopper.

Three months after surgery, Bobbi said she feels great and is optimistic about the future.

“I just want people to know that there’s hope and that it does get better,” she said, “and that things are getting better every day.”