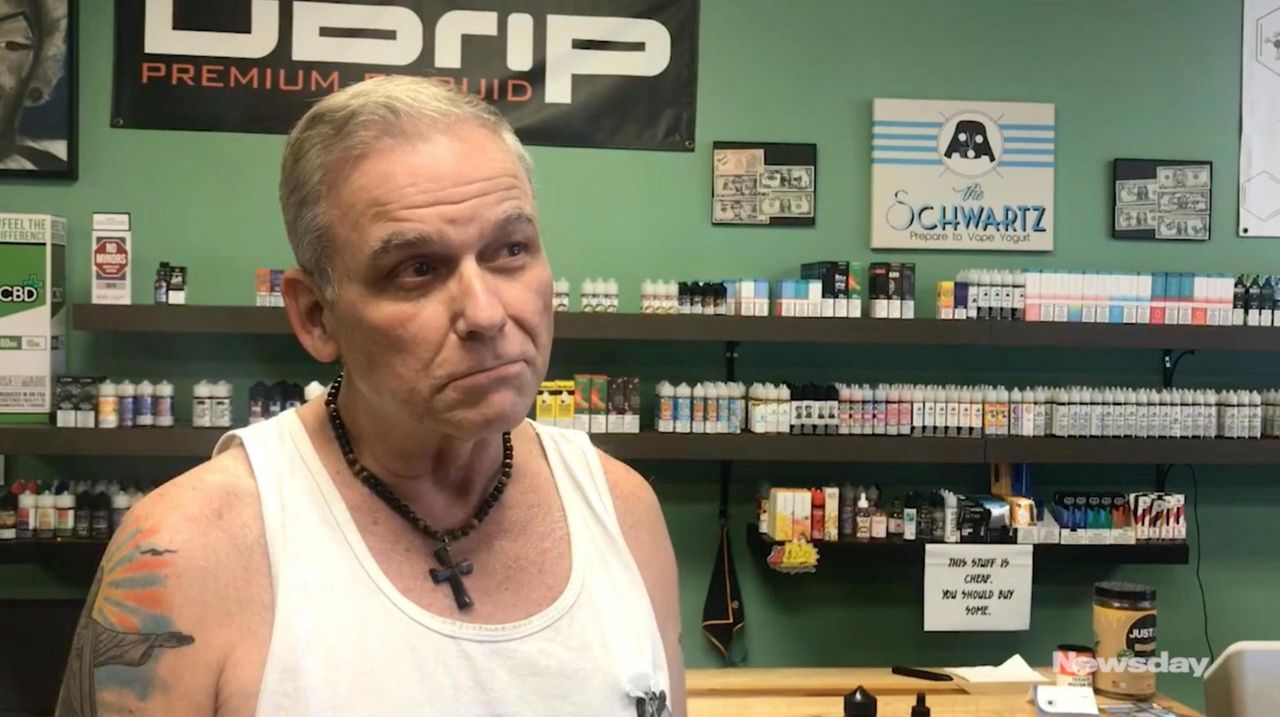 “It was the hardest thing to ever do — quit cigarettes — and this is what did it,” said Hilton, of Sayville, as she held a package of strawberry custard-flavored e-cigarette liquid.

Since Sept. 17, that and most other flavored vaping liquids have been illegal in New York State, and starting Oct. 4, after an enforcement grace period, the state will begin fining stores and distributors that sell them and companies that manufacture them. Consumers will not be punished, and the regulation does not address online or retail sales originating in other states.

New York is the first state to impose a flavor ban. Michigan on Sept. 18 put in effect a previously announced prohibition of vape flavors, and Rhode Island on Wednesday instituted a flavor ban. Massachusetts on Tuesday imposed a four-month ban on the sale of all vaping products.

Hilton and other ex-smokers fear that, without flavored e-cigarettes, they’ll return to smoking. Store owners said flavored liquids make up 90% or more of their sales and predict the ban may force them out of business.

The state Public Health and Health Planning Council’s decision to ban e-cigarette liquids with flavors other than tobacco and menthol — a ban on menthol may be instituted soon — comes amid a surge of lung illnesses and injuries associated with vaping. The U.S. Centers for Disease Control and Prevention said Thursday that there have been 805 cases nationwide and 12 deaths.

At least 28 vaping-related cases are on Long Island, representatives of local hospitals said.

Most illnesses involve patients who reported vaping THC, the chemical in marijuana that causes a high, or THC and nicotine. Some patients, though, said they only vaped nicotine, the CDC said.

On Wednesday, Juul Labs, the country’s largest maker of vaping products, said it will stop advertising its products, not lobby against a proposed federal ban on flavored e-cigarettes and will replace its CEO. The incoming chief executive, K.C. Crosthwaite, said in a statement that there are “unacceptable levels of youth usage and eroding public confidence in our industry.”

When Gov. Andrew M. Cuomo urged the health council to prohibit most flavors, he focused on the sharp increase in vaping among teenagers and what he said is e-cigarette companies’ use of flavors to entice young people — an allegation vape-product companies deny. Nearly 40% of high school seniors and 27% of high school students overall in New York vape, according to the state health department.

But adult vapers such as Hilton, 63, said they prefer flavored vaping liquids and are upset that option is being taken away.

Hilton said she’s “petrified” of being driven to smoke again. She likes the sweet strawberry flavor in her vape liquid, worries that the taste of tobacco-flavored liquid would lead her back to cigarettes and doesn’t like mint, so she doesn’t want to try menthol. State Health Commissioner Howard Zucker Thursday recommended that menthol flavoring also be prohibited, citing the popularity of menthol and mint vape flavors among teenagers, and Cuomo directed Zucker to convene another emergency meeting of the health council to institute a menthol ban.

Health officials and doctors said that instead of vaping, smokers should use products such as gum, patches and inhalers that — like most vape products — contain nicotine that can reduce the craving for cigarettes.

Brian Arthus, 32, owner of Paper Street Vapor Co. in Bohemia, said there’s a reason he and other ex-smokers couldn’t quit cigarettes with those products and could with vaping.

“They don’t re-create the oral fixation of smoking,” he said. “It’s the hand-to-mouth motion, the visibility of seeing something exiting your body, the inhaling and exhaling.”

Arthus said some customers are buying a large amount of flavored liquid, to stock up. As he stood in his light, airy store, he wondered what will happen when he no longer is able to sell the flavors that now represent more than 95% of his vape liquid sales. He worries about paying his mortgage, and that his sole full-time employee, Augie Arena, 28, will be out of work.

Arthus and other owners said they are vigilant against selling to people under 21, the minimum age in Suffolk and Nassau counties to buy vape and tobacco products, and support stepped-up enforcement against selling to underage youth. The statewide age floor rises from 18 to 21 in November. They said parents bear some responsibility for making sure their kids don’t vape.

Arthus said a new warning sign that the health council on Sept. 12 mandated for store display, which states “Vaping Can Expose You to Toxic Chemicals and Kill You!”, is “misleading” because the full health effects of vaping are still unknown.

According to the National Institute on Drug Abuse, e-cigarettes can contain toxic and cancer-causing chemicals, and, although research suggests vape products are less harmful than combustible cigarettes, more studies are needed.

Tammy Mink, 49, owner of Shore Vapes in Glen Cove, is convinced vaping is much better than smoking. She said she will dig into her personal savings if necessary to keep her store from closing.

“I’m very passionate about this,” said Mink, who smoked for 37 years and tried in vain to quit smoking until vaping was able to ween her off it. “I’ve watched many, many customers give up smoking.”

Collin Tansey, co-owner of Prohibition Juice Co., a brand of vape liquids, predicted that many vapers in New York will still buy flavored liquids — only instead of using retail products made in labs with strict controls, “You’ll have Joe Schmo mixing this in his basement,” with more risk of contamination.

Like other distributors and manufacturers on the Island, Tansey, 28, of Farmingville, is scrambling to move his business out of state.

Owners of vaping-related businesses said sales began falling more than a week before the flavor ban was imposed, when media attention focused on the lung illnesses and Cuomo and other public officials urged people to stop vaping.

The flavor ban is “the nail in the coffin,” said Spike Babaian, regional representative for the New York State Vapor Association, which represents vape businesses.

The health council’s “emergency” ban is for only 90 days and must be renewed, but, Babaian said, “It’s already at the point where [vape businesses] can’t make their rent. They can’t make it 90 more days. They won’t make it 30 days.”

Cuomo likely will support another 90-day renewal of the prohibition and plans to push for state legislation in January to permanently institute the flavor ban, said Jason Conwall, a spokesman for the governor.

Babaian believes THC is the culprit in the illnesses, not legal nicotine products. She pointed to a Sept. 9 statement from Zucker that of 14 vape-product samples tested at the time, 13 had THC and only one had nicotine — and the urine of the person who vaped the nicotine tested positive for THC. Some people may not admit vaping THC, Zucker said.

Dr. Mina Makaryus, a pulmonologist at Northwell Health, said even though most of the vaping-linked lung illnesses have been reported in the past several months, and most of them involve people who vaped THC, there were other nicotine cases going back a few years that got less attention. “The medical literature is very clear that many patients were using pure nicotine products,” he said.

Dr. Frank Coletta, a pulmonologist at South Nassau Communities Hospital in Oceanside, said that with the recent surge in cases, doctors today look for a possible association with vaping when they see lung damage. That wasn’t true in the past, when there likely were other vaping-related illnesses that never were reported as such because doctors at the time attributed them to something else.

“We didn’t think of it,” he said. “I bet you people got sick [from vaping] who we thought had pneumonia, and we didn’t link it to vaping.”

With The Associated Press

28: Number of cases on Long Island that hospital officials are aware of

*Long Island hospitals said the number of cases on the Island is likely higher.

Vaping is not a harmless practice, health experts say.

The U.S. Centers for Disease Control and Prevention recommends that people who used vaping to quit smoking not return to combustible cigarettes. There are many unknowns about vaping, but “we do have knowns about smoking,” such as cancer, heart disease, emphysema and other illnesses, Northwell Health pulmonologist Dr. Mina Makaryus said.

Suffolk behind Nassau in shots for 12- to 15-year-olds
What should I know about the delta variant?
1:50
Got the shot? LIers grapple with asking the question
Nearly all COVID deaths in U.S. are now among unvaccinated
29:22
Zero mortality for fully vaccinated Long Islanders
Encouraging COVID shots can be tricky for employers
Didn’t find what you were looking for?