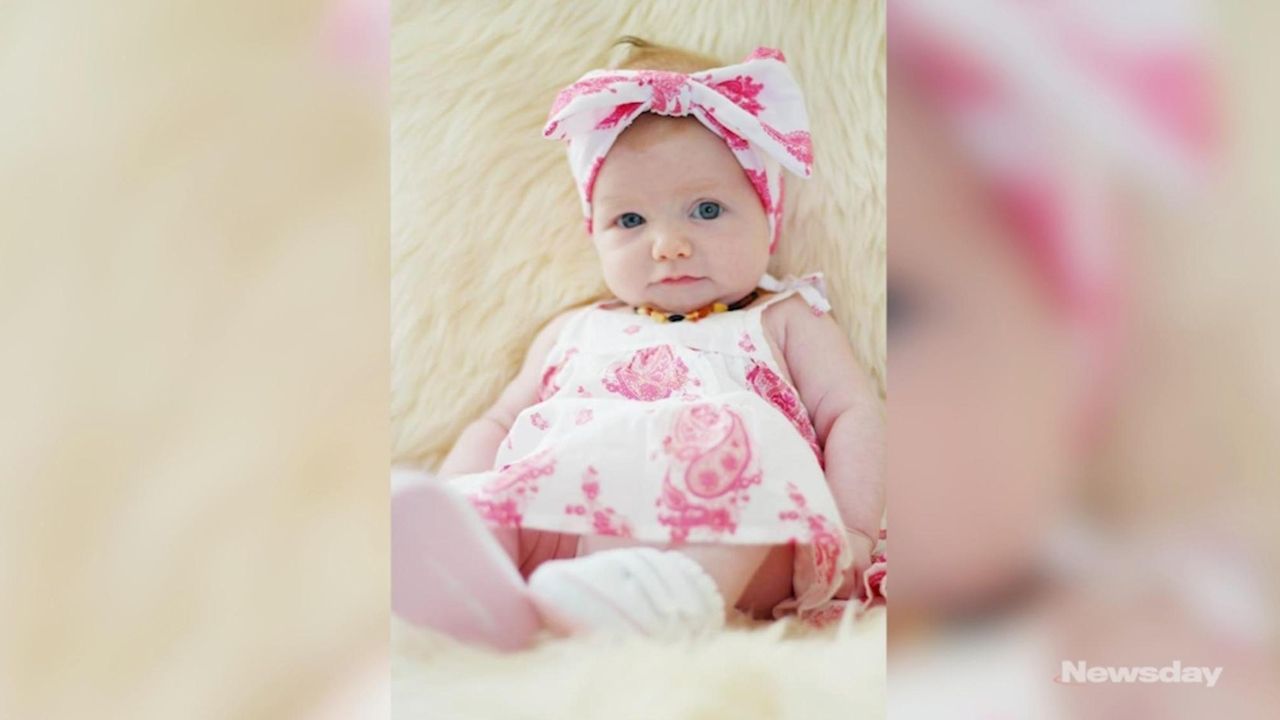 On Thursday, Ashley Cotter of Wading River spoke about her 4-month-old daughter, Ruby June, who is waiting for a transplant because she has a rare and potentially fatal condition called dilated cardiomyopathy, which restricts how blood is pumped to the body and its vital organs. Credit: News 12 Long Island; Cotter family

Brian and Ashley Cotter of Wading River hope someone has a heart — for their 4-month-old daughter, Ruby June.

She needs a transplant because she has a rare and potentially fatal condition called dilated cardiomyopathy, which restricts how blood is pumped to the body and its vital organs.

Until the transplant, the couple has moved into her hospital room at NewYork-Presbyterian/Columbia University Irving Medical Center in Manhattan to care for their little girl, after being sent from Stony Brook Hospital on Sept. 4, where the couple first went when their daughter fell ill.

Brian Cotter, 35, who serves in the Air National Guard with the 102nd Rescue Squadron in Westhampton, rescues people from disasters like hurricanes or war zones. He was in Iraq in 2018 from January until June.

Now it's his little girl, on a transplant waiting list, who needs help.

His wife, Ashley Cotter, 29, said: “It’s bittersweet to wish for something like that. ... I mean, someone has to be so selfless to give their child’s [heart] to save someone else’s. Our daughter’s deserving, but their child doesn’t deserve it either, so we don’t want to think about it, but we know when that day comes it’s still going to be sad."

“It’s happy, but it’s sad, it’s fear, it’s every emotion you can possibly imagine,” she added.

Dr. Warren Zuckerman, a pediatric cardiologist on Ruby's care team, said the heart will come from a brain-dead baby or small child — it can be twice the recipient’s weight or as low as 75 percent of it.

In the meantime, he said, the care team wants her to develop and reach ordinary milestones.

“We’re really happy that she’s progressing as best she can given the fact that she’s being hospitalized for so many of these formative months,” Zuckerman said.

Until the transplant, Ruby is using a mechanical device known as a Berlin heart — which helps to take over pumping duties of the left ventricle. She's expected to be on the Berlin heart for about 2 or 3 months, according to Zuckerman. She has highest priority on the transplant list, based on how dire the need is.

Both Ashley and Brian — he’s also a military contractor and aviator and she’s in pharmaceuticals — have stopped working to address their daughter’s needs full-time. A GoFundMe campaign set up by their loved ones is seeking money to help with the couple’s mortgage, bills, car payments, food and other expenses. As of early Thursday evening, the campaign had raised $75,439 from 878 donors.

"We call it our studio apartment, with our baby, keeping her happy, and it's hard to really think about anything else besides that. I mean, we're both not working," Brian Cotter said. "We're both not home, our dogs are living with friends. Seeing what everyone else is doing — everyone else with their children — it's hard seeing everybody live their normal life while we're kind of stuck here."

The medical expenses are being covered by Brian Cotter's insurance, he said.

Knowing that people care about his family "is keeping us going, it's keeping us strong," he said.

"It's kind of restored my faith in humanity, a little bit, seeing how people show up when they're needed," he said, adding: "It makes us feel good knowing there's this whole army of people out there rooting for us."

Zuckerman said at least about 1 in 100,000 children are affected with the condition. The hospital does between 25 and 30 such transplants a year among patients 18 and younger. There are about 700 such transplants worldwide.

The early signs of the condition are failing to feed well, not gaining weight, sweating and difficulty breathing. The symptoms resemble a virus or cold, and in most cases end up as just that. So the couple said they didn't realize how serious Ruby's condition would be when they first went to Stony Brook Hospital because something didn't seem right with their daughter: her body was too warm and her limbs too cold. She was very pale, vomiting and dry heaving, and lethargic.

Most with dilated cardiomyopathy don’t need transplants. But Ruby does.

More than 95% percent of transplant patients survive one year afterward, said Zuckerman. Ruby will need to be on immunosuppressant medication for the rest of her life. In an estimated 25 to 30 years, Zuckerman said, it's possible she'll need another heart transplant.