WASHINGTON — The House voted Friday to approve funding and a 70-year extension for the 9/11 Victims Compensation Fund, setting it up for a final vote in the Senate and taking a step closer to ending the need for ailing first responders to lobby for badly needed aid.

The bill passed overwhelmingly, 402-12, bringing a standing ovation and cheers from former New York police officers and firefighters in the gallery as lawmakers on the House floor below looked up and applauded them. Now it goes to the Senate.

But a cautious determination to finish the job tempered the celebration after the vote for the bill, which now also includes the names of Ray Pfeifer and Luis Alvarez following Alvarez’s death from cancer after he pleaded in a June House hearing for the bill’s passage.

“This is the semifinals. The finals are two weeks from now in the Senate. The men and the women behind me have paved the way,” former "Daily Show" host Jon Stewart said in a pre-vote news conference with first responders, advocates and lawmakers. 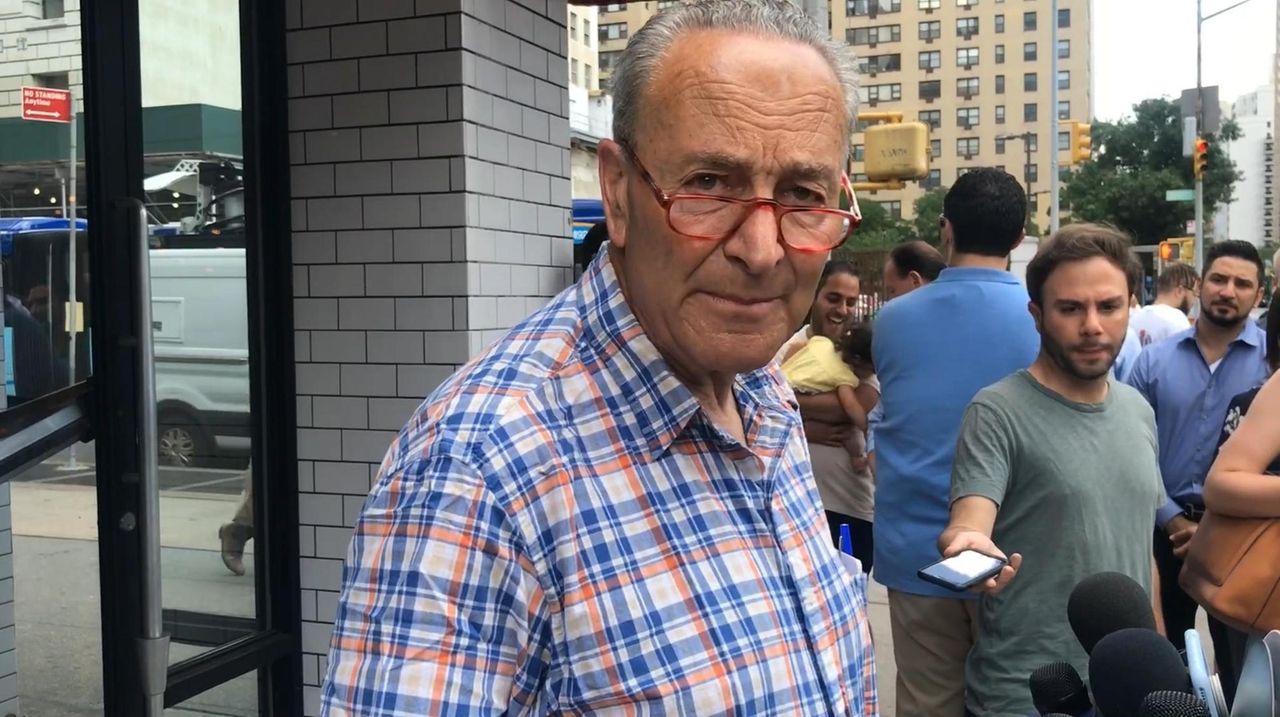 Schumer: ‘Please get this done ASAP,’ Alvarez pleaded Sen. Chuck Schumer (D-N.Y.) on Sunday discussed the September 11th Victim Compensation Fund legislation which was approved by the U.S. House of Representatives on Friday and now goes to the Senate. Credit: Newsday / Matthew Chayes

“This is necessary,” Stewart said of the compensation fund. “It is urgent. And it is morally correct. And not only that, you have a program that works.”

Senate Majority Leader Mitch McConnell (R-Ky.) and other Republicans have been wary of the compensation programs for the 9/11 responders and other victims, insisting on five-year limits to the program to determine its costs and effectiveness.

But in a statement after the vote, McConnell said, “The Senate has never forgotten the Victims Compensation Fund and we aren’t about to start now. Nothing about our shared goal to provide for these heroes is remotely partisan. We will consider this important legislation soon.”

Sen. Kirsten Gillibrand (D-N.Y.), the chief Senate sponsor, urged quick Senate passage. “The Senate majority leader gave his commitment to get this bill done in the next two weeks and we now have 72 bipartisan co-sponsors — which means there are no excuses,” she said.

Lawmakers said the pressure by former New York police and firefighters led by John Feal, who lost part of his foot working at Ground Zero, and the spotlight brought by Stewart has put pressure on Congress to act on the legislation, which otherwise might languish.

The legislation extends until 2090 a fund established to provide cash awards for victims of the terrorist attacks on the World Trade Center on Sept. 11, 2001, including those injured after the attacks, first responders, downtown workers, downtown residents and volunteers.

The Victims Compensation Fund was passed for a five-year term in 2010 and renewed for another five years in 2015, in legislation whose key sponsors included Rep. Jerrold Nadler (D-Manhattan), Rep. Carolyn Maloney (D-Manhattan) and Rep. Peter King (R-Seaford).

Without reauthorization, it expires in 2020.

Rep. Doug Collins (R-Ga.), the top Republican on the House Judiciary Committee, voted for the bill but said he worries how it will be paid for. The Congressional Budget Office said it will cost $10.2 billion for the first 10 years after 2020.

But for those ailing, and the members of their family, the issue is personal.

Aida Lugo of Baldwin and Phil Alvarez of Commack, the sister and brother of Luis Alvarez, before the vote gave emotional thanks for naming the bill after him — and expressed determination to see the legislation finally enacted, as their brother had hoped to do.

“To have his message remembered more so than his name, that’s the way he would want it,” said Phil Alvarez, a retired Suffolk police detective, after the vote.

“As a family, we are here because we promised that we would see this through for him if he couldn’t be here to see this day,” he said. “And we will be here two weeks from now in the Senate, if that’s what it takes.”