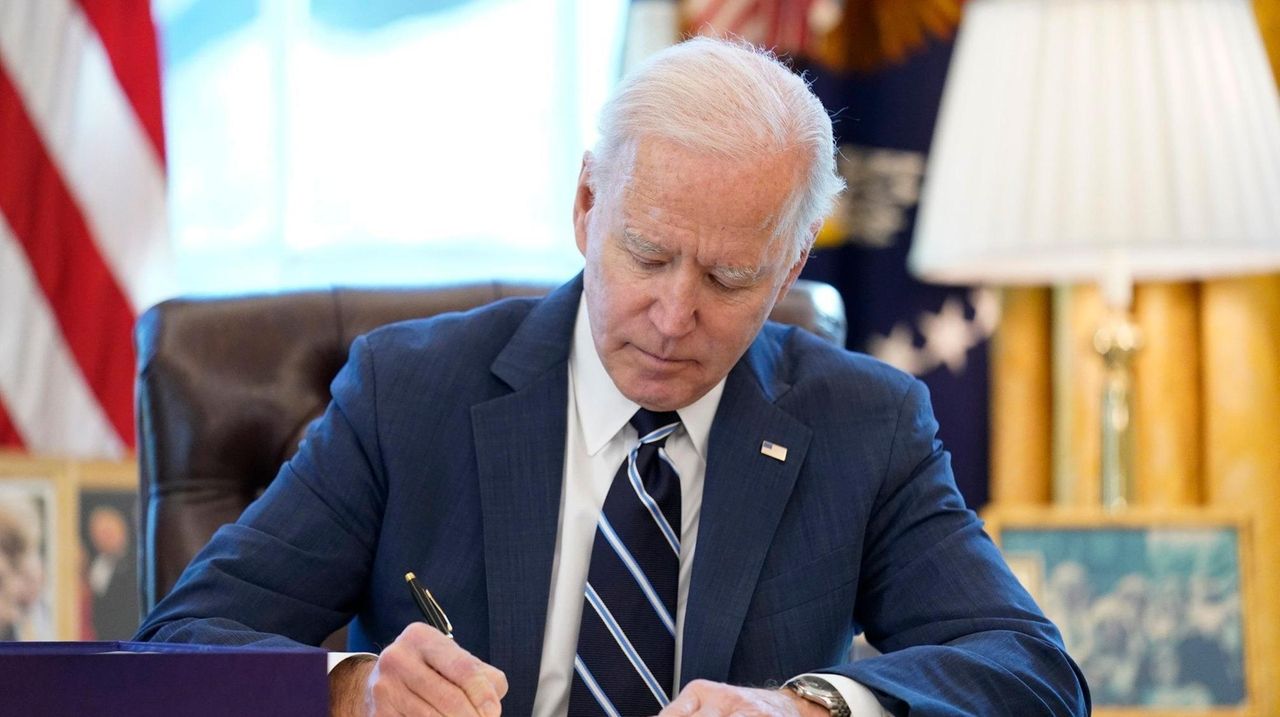 WASHINGTON — Starting Thursday, families with children ages 17 and younger will start to receive up to $300 a month through the end of the year as part of an expanded child tax credit made available through the coronavirus relief package passed by Congress in April.

The amount families receive per child varies by age and household income, but generally most households earning $440,000 or less that qualify should expect to receive some level of increased return under the plan signed into law by President Joe Biden in April.

In New York state, the parents and guardians of more than 3.5 million children are expected to qualify for the expanded tax credit, according to figures provided to Newsday by the White House.

The Internal Revenue Service has started notifying qualifying parents by mail about the expanded credit and how much they can expect to receive. Unlike the standard child tax credit that families usually receive as a lump sum credit when they file their taxes, this year parents will receive half the increased credit in six installment payments from July to December.

Here are five things to know as payments start to be disbursed:

About 90% of U.S. families will qualify for some level of the expanded credit, according to the IRS.

The April stimulus package — known as the American Rescue Plan — increased the existing Child Tax Credit for this year from $2,000 per child to $3,000 per child over the age of six and $3,600 for children under the age of six. The plan also raised the age limit of the credit from 16 to 17.

The expanded credit only applies to those children who are 17 years of age or younger as of Dec. 31, 2021. If a child turns 18 at any point before the end of the year they do not qualify for the expanded credit, Craig Petrella, a certified public accountant based in Massapequa, told Newsday in an interview.

Petrella, citing IRS guidance, also notes that if a "child turns six-years old before Dec. 31 they will only be eligible for the lower amount of the tax credit which is the $3,000 as opposed to the $3,600."

While parents with children over the age of 17 do not qualify for the expanded credit, they still are eligible to file a one-time $500 claim for each 18-year-old in the family, and for each full-time college student between the ages of 19 and 24, according to the IRS.

The credit amount will be based on a household’s 2020 income, according to tax returns filed by a couple or single parent with the IRS by this year’s filing deadline, May 17. If 2020 income taxes were not filed, the IRS will rely on a household's 2019 return.

All couples who earn $150,000 or less, all single parents earning $75,000 or less, and all individual parents who file as "head of household" earning $112,500 or less will qualify for the full expanded credit.

Those who earn above the income threshold can expect to see less of a credit.

Starting Thursday, most families will start to receive their monthly payments, and will continue to receive them on the 15th of each month through Dec. 31.

The payments serve as an advance on tax credits most families don't claim until they file their taxes each year.

Families will receive half the tax credit in six monthly payments between July and December. The other half will come in a lump payment by April 2022, after families have filed their 2021 federal income taxes.

Families also can go to the IRS website (irs.gov/childtaxcredit2021) to opt out of receiving monthly payments and instead receive one payment in 2022. Otherwise, the monthly payments will be issued automatically.

Taxpayers who have their bank information on file with the IRS can expect to receive the checks via direct deposit; those who don’t likely will receive a check or debit card similar to the system used for direct stimulus payments. Those who want future payments issued by direct deposit can update their bank information on the IRS child tax credit webpage.

The IRS website also allows low-income families who typically aren’t required to file an income tax return because they don’t make enough money, to fill out an online "non-filer" application to ensure they receive their payments.

"The idea that these credits are going to be paid monthly is really helpful because it helps with expenses," said Rebecca Sanin, President and CEO of the Health and Welfare Council of Long Island. "It means that families don't have to wait until January to get some tax relief."

Watch out for overpayments

Some families may end up receiving more than they’re entitled to because their income has increased between 2020 and 2021, and could end up having to repay the excess amount, Petrella warned.

"The thing that people do have to worry about or think about is if their 2020 income was less than what it may be in 2021, they may have to pay some of this money back," Petrella said.

Petrella said parents should review the income thresholds to see if their 2021 income will exceed the income limits, making them eligible for less.

Parents also should look out for overpayments for children who were five years old in 2020 but turned six in 2021.

"I’ve already had a lot of calls this year with clients asking, ‘Should I take the payments, or should I opt out?’ It's more of a personal preference," Petrella said. "Some people need the money. I'm kind of telling people, hey, if you really don't need it to survive and pay your bills, why don't you just wait at the end. This way you don't have to pay any back if you fall into one of those categories."

The increased child tax credit only applies to 2021, but there have been bipartisan calls to extend it.

But some Republican members of Congress have raised concerns about the direct payments, which they contend could create the potential for fraud.

Asked about the prospect of passage of an extension, Gene Sperling, Biden’s point person on the American Rescue Plan, told reporters he was hopeful there would be an appetite to extend the increased credit levels.

"We've seen many Republicans in the past support the child tax credit and support expansions and refundability in the child tax credit," Sperling said. "We do feel that there have been several notable Republican senators who have been supporters of the Child Tax Credit, and making it more fair and refundable, and we very much hope that they will join us in supporting the extension of the Child Tax Credit."

The expanded tax credit, if extended, could reduce childhood poverty in the U.S. by nearly 45%, according to an analysis by the Center on Poverty and Social Policy at Columbia University.

And according to a study by the nonprofit, nonpartisan Annie E. Casey Foundation released in April, more than 4 million of the 12 million U.S. children living below the federal poverty line could be lifted out of poverty if the expanded credit were to become permanent.

The federal government defines a family of four earning under $26,500 as living in poverty.

In Nassau County, about seven percent of children — about 19,500 — live in poverty, while in Suffolk about nine percent — about 28,400 — do, according to the U.S. Census Bureau's American Community Survey projections for 2019.

Sanin noted that the federal poverty standard doesn’t factor in New York’s higher cost of living compared with other states and doesn't fully capture the financial need of families on Long Island.

"That formula does not tell the story at all of all the low-income and also the middle-class families on Long Island that are really just barely making ends meet because they have a tremendously high cost of living," Sanin said.

"So you need a very high household income to meet basic household needs on Long Island," she said. "What's very exciting about this tax credit is it doesn't rely on federal poverty guidelines, it relies on income."